Thriller Night at the Bookstore, or How I Met Michael Jackson 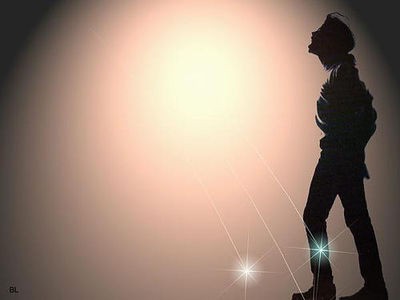 I must begin this story with a confession: I was probably the only kid in the 80s who didn't like Michael Jackson. Definitely the only kid at my school. (This was verified by a poll.) I listened to my friends' copies of Thriller and it did not move me.

Part of this was a proto-hipster attitude: If it was embraced by the masses, it couldn't possibly be any good. Part of this was the fact that my own favorite record at the time -- which I still have -- was a recording of Beethoven's Sixth.

I was a weird kid.

The 80s passed, Thriller was largely forgotten in the wake of other, less-successful albums and Weird Al Yankovic parodies, and Michael Jackson became a joke.

Which is why, early in 2003, when someone called the Barnes & Noble in Boca Raton, Florida, where I was working and said that Michael Jackson wanted to come in after closing time and shop, I -- and, more significantly, the manager on duty -- thought it was a prank call. She told the caller that we kept the store open for nobody and slammed the receiver down. 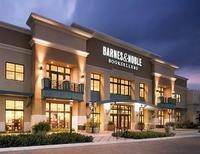 But Michael apparently really wanted to shop. At Barnes & Noble, not Borders, and in Boca Raton, not West Palm Beach. So his lackey called again the next afternoon. He was fortunate that Deanna, that day's manager on duty, had been in college in 1982 and just looooved Thriller.

"Omigod, of course he can come in!" she said. "And I'm so sorry about yesterday."

Deanna cornered everyone working the closing shift and informed us all that we were staying open late for a "very special customer." She tried to keep said customer's identity quiet, but gossip incubates quickly in a bookstore. Within half an hour, everybody on the floor knew Michael Jackson was coming, for real. By eight o'clock, people who weren't even working that day started wandering in. 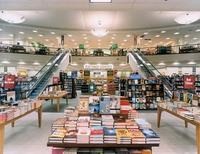 Closing time was eleven. At ten, we started re-shelving books and cleaning up the cafe. The customers looked puzzled and we made vague excuses about inventory. We ransacked the stock looking for something The Gloved One could sign, but all we came up with were a couple of late-period CDs and a tell-all unauthorized biography.

By 10:55, we had hustled the last customer out the door and stood in our places, impersonating the most efficient bookstore clerks in the world. Deanna and Vangie, the two biggest Michael Jackson fans, got place of honor near the front door. One cashier stood behind a register and a lone barista stayed at the cafe in case the King of Pop desired refreshment. Mike, the music manager, waited in Music and two more booksellers lurked around upstairs. I was stuck at the info desk, along with Michael, who was too old to care about Michael Jackson, and Yossi, who had renounced all pop culture in the wake of his conversion to Orthodox Judaism.

"That's what he drives?" Yossi whispered. I agreed it seemed oddly humble, but Michael suggested that it might be better for purposes of anonymity than, say, an Escalade.

And then Michael Jackson appeared.

He looked almost exactly the same as he did in pictures in the tabloids, small and skinny. His face was very white and covered by a camo baseball cap and an enormous pair of sunglasses. His hair was loose and wavy, apparently immune to humidity. It was definitely Michael Jackson. No one in the entire world looked like that.

Two boys were with him. They looked about ten and looked a lot like Michael from his Jackson 5 years. They had Afros and little caps set on top at jaunty angles.

"Oh, Michael, we're so sorry about yesterday," Vangie cried. "We love you!"

Michael and the boys ignored them and headed straight for the music section at the back of the store.

"Can I help you find anything?" Mike asked. He was trying very hard to be cool. He almost succeeded.

Michael Jackson shook his head. The boys wandered off to look at the DVD's.

The rest of us stood there stupidly.

"If I were him, I'd shop on Amazon," Michael whispered to Yossi and me at the info desk.

"Yeah, especially for CD's," I said. Despite our employee discounts, it was still cheaper to buy CD's next door at Circuit City. But maybe if you're as rich as Michael Jackson, you don't have to worry about the little economies.

By 11:45, it was clear Michael Jackson was in no need of our expert assistance. He had yet to say a word or even approach one of us. This was disappointing, as I had wanted to hear The Voice.

Deanna said all of us who wanted to could leave, except the cashier. Michael, Yossi and I hustled up to the time clock to punch out before she could change her mind. Gradually, the others started to leave, too. Nobody hung around outside to smoke cigarettes the way they usually did. Everything was eerily quiet.

"Did he actually buy anything?" I asked Sherry, one of the lead booksellers, the next afternoon.

Up in the managers' office, the two CDs, now signed, sat on the desk.

"Did he ever say anything?" I asked Vangie, who had stayed till the bitter end at 2 a.m.

A few months later, the child molestation trial got underway, which set off a new wave of bookstore gossip. Did we actually see child molestation in action? Nobody was sure. The prevailing opinion was that the boys must have been relatives. This made us feel better. Michael Jackson may have been a really rude customer, but he was a generous uncle.