June 22, 2009 at 12:35 PM
comment
In this week's paper, Christian Schaeffer profiles Raglani, the local experimental musician that's experienced highs (releasing an album via Kranky Records, playing Brooklyn's No Fun Fest) and crashing lows (having his gear stolen while in NYC) in the last year. Read his feature here. 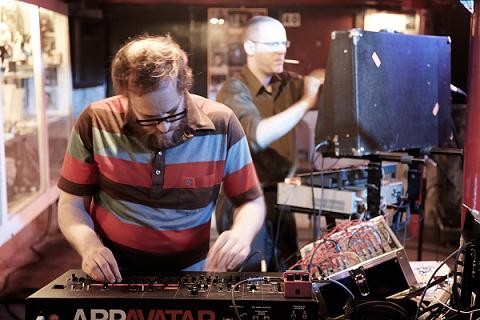 The following MP3 -- the last thing Raglani was working on before he went on tour -- is an A to Z exclusive. Raglani says the song is a "shorter, friendlier mix of the first section" of a twenty-minute track called "Various Demises" that was to appear on the Pegasus Farms-released Steve Hauschildt/Raglani May 2009 Tour CD-R. He also reports that he's putting together a limited-edition tape box set to sell -- containing donated tracks from other musicians -- that should appear this fall/winter, although who's set to appear on it isn't confirmed yet. See below for outtakes from the feature, including some of Raglani's surprising inspirations.

MP3: Raglani, "Various Demises" (Section One)
Raglani on being an punk in a high school full of hair-metalheads:
To say you liked punk rock in St. Louis in the '80s would get you punched or spit on or chased by some hoosiers. That used to happen to me quite a bit when I moved here.

The first year of living in St. Louis was brutal. I think Slippery When Wet was the big album and everyone in school wore a jean jacket and a Def Leppard shirt. I was skateboarding and had a stupid skater haircut. There was one kid in my classes who had spiky hair, which was a big indicator. So I tried to talk to him, and he was into punk. Then a few months later he came to me and he was like, "I don't wanna be a punk anymore - I wanna be a burnout." He actually said those words to me. And he offered to sell me these tapes, [The Sex Pistols'] Never Mind the Bollocks and U2's The Unforgettable Fire. I saved my lunch money for a week and gave him the money. And those were my first two tapes.

I remember being in high school and going to the library and looking at this encyclopedia of rock, and there was a picture of Johnny Rotten and this paragraph about punk rock. I just ripped the page out - it was a picture of him wearing a beret with safety pins in it. I had it in my wallet; I had to keep it with me.

On his process of composition:
A lot of the songs come out of improvisation. My technique for a while was to record something and then mute that track, then record something and mute it, and do five tracks of improvisations. Then I'd listen to them all at once and find interesting bits and cut the parts that didn't fit together. Then you'd have this really crazy spine and then start hearing the parts you want to put in there, with purpose. That's how I was recording for a long time, just throwing shit against the canvas and taking a step back to see if there's a picture there, then crafting that picture into existence.

On the challenges of being a one-man band:
I'm always looking for a person that will lock in and I'll be able to be in a band cluster, where there are two guys who are so locked in that they sound like a machine. In that respect I would like to find someone to play with, but people are so quirky and you just need to be prepared to do everything yourself. It's been difficult, but I wouldn't arrived at these recordings if I didn't have that attitude.

On his love of '60s folk and psychedelic music:
I came from a punk background and did some damaged, art-rock sort of stuff. At some point I sold all my stuff and bought an acoustic guitar because my dad was sick and I couldn't rock out in the basement - I had to be really quiet. I just started teaching myself how to fingerpick and basically how to do music.

I started listening to John Fahey and Nick Drake and British folk stuff, and that started me down the road of learning about harmony and melody and writing more conventional songs. I'm totally '60s-damaged. I could listen to the most trite shit if it was recorded between '65 and '72 just because [of] the production and the nostalgic feel of it. Even though I do noise or experimental or drone music, whatever you wanna call it, the idea of nostalgia and memory is something that I try to infuse in with the dissonance.

It's like trying to get as much emotional attachment to something that's completely abstract as you can without referencing recognizable chord structures and things like that. Or deconstructing those structures down to the point where they're completely minimal and somehow your ear as a music listener will find a root of something on that record -- for a moment, at least.