June 22, 2009 at 3:27 PM
comment
The blanket of humidity over Kiener Plaza on Monday -- whose idea was it to have the press conference outside? -- didn't seem to deter the mood of media and baseball officials touting Sheryl's Crow's free concert planned for the All-Star Weekend. 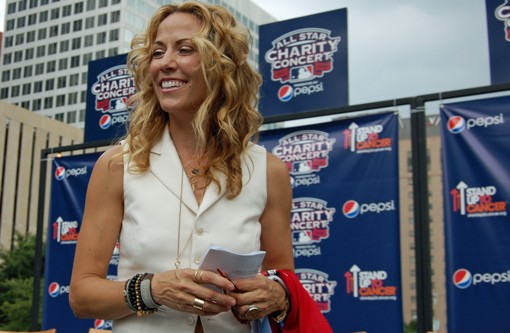 Crow, a Missouri native (and former Rockwood School District music teacher, and former Georgetown Apartments resident), highlighted her Missouri roots and allegiance to the St. Louis Cardinals during a brief speech Monday to the assembled, sweating members of the press.

As reported earlier today, the concert is scheduled for July 11 beneath the Gateway Arch. Rumors had been going around for more than a month that Crow -- who also sang the National Anthem at last year's All-Star game in New York -- would be the performer this year.

More photos and video are after the jump...

"Sheryl was our first and only choice for this concert, not only because she's a Missouri native but a huge Cardinal fan as well," said Tim Brosnan, executive vice president of business for Major League Baseball.


Crow spoke for about three minutes, just long enough to reminisce about meeting Willie McGee and Ozzie Smith while she was college student during the "I-70 Series" against the Kansas City Royals in '85. She also drops a curious reference to her early days as a back-up singer for Michael Jackson, as well as a memory about seeing Elton John, dressed as a duck, perform under the Arch.

Fans of the pop musician should listen for the hits at the concert.

"It will be a lot of songs that are very familiar to our fans, or anyone who's listened to the radio for the past fifteen years," Crow said.

As a final note, Crow teased that a special guest will perform but added, "I'm not tell-ll-lling."

Snapshots This Just In