Better than: Streaming last night's show via the Internet, as a friend was doing.

It took about three hours for Phish's show last night at the Fabulous Fox Theatre to reach transcendence. This occurred at the precise moment the quartet started its triptych of songs known as Mike's Groove -- i.e., "Mike's Song," "I Am Hydrogen" and "Weekapaug Groove." As the Stevie Wonder-styled funk backdrop and bassist Mike Gordon's lead vocal turn sent the sold-out crowd into a body-shaking frenzy, something in the music shifted -- imperceptibly at first, but then more obviously as the song continued.

After dancing around it for much of the show thus far, the Vermont quartet had finally hit its stride. "Mike's Song" melted into the mellow daydream "Hydrogen" (a bluesy song that featured some delicate, evocative guitar work), which itself segued right into the upbeat, twang-funk limb-loosener "Weekapaug Groove." By this point, the trio of songs had become an intricate, tightly braided jam, carried forth by the chemistry between the band members, the crowd's enthusiasm and an impeccable, unshakable groove.

Buoyed by this momentum, Phish then covered Wonder's "Boogie on Reggae Woman" -- with some tweaked keyboards from Page McConnell that sounded as playful as a Muppet funk-strutting like a pimp - and ended the 80-minute set with "Character Zero." During vocalist Trey Anastasio's distortion-drenched guitar solo, people were flailing about so madly, the Fox's balcony was visibly (and scarily) bouncing up and down by at least a foot. (A message board poster also reported things falling from the ceiling onto the crowd below.) 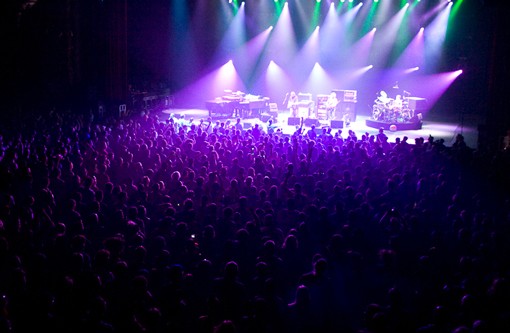 The fantastic end of the second set underscored the shortcomings of other parts of the show, including an up-and-down first set. Surprisingly, the two new songs which opened the show - a catchy classic-rock update "Kill Devil Falls" and a whimsical "Ocelot" - weren't as mood-killing as the third song: "Brian & Robert," a lullaby ballad from 1998's The Story of the Ghost. Perhaps sensing the crowd's restlessness, Phish then reached back for "Sample In a Jar" (from 1994's Hoist) and the Allman Brothers-esque title track of 1993's Rift. The latter especially connected, thanks to saloon-styled piano and Anastasio and McConnell's vocal switch-offs.

But this ebb-and-flow pattern repeated itself during the 80-minute set. Goodwill spawned by the theatrical, lively old favorite "Reba" - which darted from tongue-twisting into prog-lite and smooth-jazz -- disappeared thanks to anemic, pastoral "Train Song." The second 80-minute set appeared to start off strong: a fifteen-minute rendition of rarity "Halley's Comet" - complete with beatbox-y harmonies and psychedelic touches - blended into quintessential jam "Runaway Jim."

However, then came the airless new song, "Time Turns Elastic." That song devolved into a ten-minute-plus epic, and only near the end - when it exploded in tangled prog chaos - did it distinguish itself from an interminable imitation of a jam song. (The people in front of me caught up on their email fairly well during the song, however.)

But "Elastic" was forgotten by the encore, which began with an a cappella rendition of the "Star Spangled Banner." (This revealed that drummer Jon Fishman was sporting a black dress with red circles.) Then came a highlight: "McGrupp and the Watchful Hosemasters," performed for the first time this tour. Compelling - and featuring everything from classical-wrought piano to straight-up acoustic pop and trademark solos - it demonstrated Phish's balance of the silly, creative and complex. (Heck, it made a decent, show-ending cover of the Beatles' "While My Guitar Gently Weeps" feel almost anticlimactic.)

It's an understatement to say that Anastasio makes playing guitar look easy. Looking like a cool dad in a navy polo shirt and jeans, you can see the wheels turning in his head as he's playing - he screws up his face in concentration and rocks back and forth gently, even as his fingers fly over the neck of the guitar. Classic rock, jazz, prog, rock- Anastasio's got it covered. The rest of the band is equally understated (save perhaps for Fishman, who has to man a drum kit with tons of bells and whistles), which makes its intuitive musicality that much more impressive. More important, everybody looked like they were having fun onstage.

It was my first time seeing Phish -- and from the part of the night from Mike's Groove onward, I completely understood why the band became so iconic and popular. Everything clicked -- and I wish I had jumped on the fan bandwagon years before, so I could have seen them in, say, 1995. But wishing Phish back to that era does them a disservice now -- they're a different band with different priorities and experiences. And for a band that thrives on improv and living in a moment, doesn't that make sense? Last night, when Phish was on, it was very, very good -- and when the band was off, it was mediocre. Thankfully, the balance tipped more often to the side of the former -- ensuring that most fans went home satisfied.

Critic's Notebook: I've never seen so many people outside the Fox looking for tickets; one girl held up a sign that said "My Box for your Fox." (Yikes.) The lobby was also filled with people just stoked to be there -- I saw some hugging, random cheering and lots of conviviality. It felt like someone had just won the Super Bowl. And when the band took the stage just before 8 p.m., the standing ovation was deafening.

Just as deafening was the band, although the high volume didn't affect the sound quality, at least where I was sitting (which has been a common complaint at the Fox for many shows).

Huge compliments also go to the amazing light show -- a kaleidoscope of rainbow-colored lights that enveloped the crowd and times seemed tailored to the um, less-sober portion of the audience. On certain songs, the lights flashed in unison with the music; others presaged songs for dramatic effect.

Confidential to the dude in front of me: No, I didn't have a pipe on me, although I hope you got a contact high from everyone else around us, like I think I did.