June 15, 2009 at 11:05 AM
comment
Twangfest 13 closed out on Saturday, June 13 at the Duck Room, but you could consider the Pageant debut for Jenny Lewis (supported by indie twang-blues rockers Deer Tick and the droll and self-consciously eclectic Farmer Dave) an unofficial fifth night. And yet the vast majority of the capacity crowd (balcony closed) wouldn't have been caught dead at Twangfest, a festival lacking both buzz and resources to book the kind of artists featured in the fashion glossies that pass themselves off as music magazines.

(View a slideshow of the concert.) 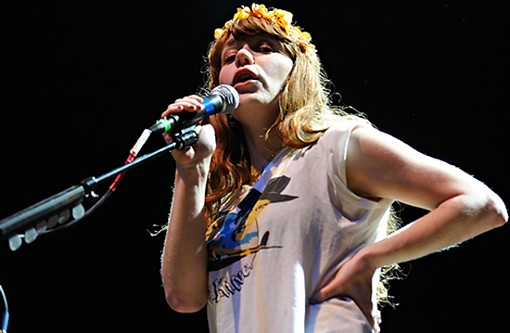 But Lewis is a twang goddess all the same, and her band, fresh off a weekend at Bonnaroo, played loose, graceful, sometimes thrilling, always individually-stamped Americana impressions, walking on the wild, Southern side of rock, and giving Lewis the space for her forceful vocals and stage left-to-right-and-back-again prowl. 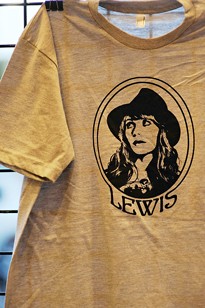 That band is anchored by Farmer Dave and company (singer and multi-instrumentalist Dave Scher, drummer Barbara Gruska and bassist JW), who turned in a short, chatty, sound check of a set that swerved from jangle fuzz pop, straight up folk rock, and band-in-the-box and melodica dub. As a singer, Farmer Dave is a spectacular guitarist, but it was drummer Gruska who made the set more than inconsequential. She has the precision to be a studio soul player and the fills to conjure Keith Moon's ghost.

Providence, Rhode Island's Deer Tick apparently took the long way from Bonnaroo, arriving an hour or so before they were scheduled to play, not that they had plans to freshen up. Singer and guitarist John Joseph McCauley III mic-checked with a few lines from Jim Croce and the guitar lick from Guy Clark's "LA Freeway," both of which contributed to winning me over, even before opening with "Easy" and "Little White Lies," two of McCauley's shrewdest compositions. As a singer, he's an excellent writer, nearly living up to his influences, the aforementioned Croce and Clark, as well as Mellencamp (the band covered "Authority Song" without a trace of irony) and John Prine. To call the band loose is to understate the obvious, but the delight they take in just playing rooted rock music, without pretense or subtlety--blues guitar duels thrown down hard, Chuck Berry riffs ganked and smeared with overdrive--is genuine, and nearly sets them apart from the indie scruffdom. McCauley ended the set with a solo electric "Mexican Home," a relatively obscure but beautiful cover; an unscientific poll suggested he was one of the few people in the room who could identify John Prine as the composer.

The Jenny Lewis band took the stage before their dauntless leader, with guitarist and duet (and songwriting) partner (and boyfriend) Johnathan Rice warming up and handling the charming introduction: "You can get into a lot of trouble on a Sunday night. Prepare your soul for eternal damnation with Jenny Lewis." 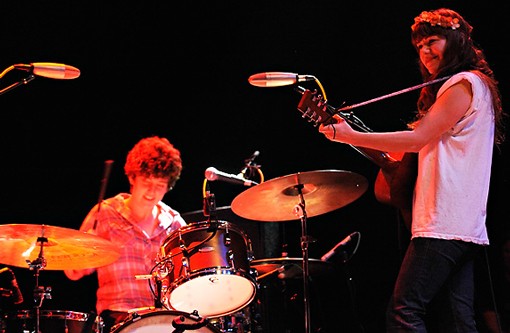 She walked out in an ensemble that surely disappointed the overdressed shabby-chicsters that crushed onto the floor: jeans, t-shirt with sleeves rolled up and garlands in her red hair. "See Fernando" started the set with slicing lap steel from Farmer Dave, chunky rhythm guitar from Rice and utility percussion from Danielle Haim. Lewis's voice, supple and more muscular than usually recognized, was enough to fill up the room, but her band is more than just back up. They know how to move with her, whether on the fierce and funny "Charging Sky" or the omnichord-driven "You Are What You Love" (both from Rabbit Fur Coat); they know how to lift her as well. Lewis admitted to needing a shot of "hair of the dog" post-festival and pre-"Pretty Bird," which she dedicated, weirdly (and vision quest lyrics notwithstanding) to all the Native Americans in the audience. With the ending notes, she backed off the mic and let her voice rip, really rip, for the first time, which is why--you knew I'd get to it--she is more than just smoking hot.

"Carpetbaggers" followed, with Rice taking Elvis Costello's role on the duet, and the band pushing harder, Gruska getting a nice swing on her kit. Lewis introduced "Bad Man's World" with a story about meeting the masturbating bear and Triumph the Insult Comic Dog at Bonnaroo ("I'll do you from behind and you'll smile the whole time," was Triumph's offer). That was her first turn on the electric piano; Farmer Dave's melodica fuzz filled in for the missing strings nicely. But the set's first jaw-dropper was the first Rilo Kiley song: "Silver Lining," played solo acoustic on her small Martin guitar. The proverbial pins dropped across the Pageant and echoed to the Arch and back. Sometimes a St. Louis audience knows just when to STFU.

And the rest of the set--with a cynical, sweet and welcome "Rise Up With Fists!" and new songs, "Just Like Zeus" and "Big Wave," both suggesting a Tom Petty-esque turn, a solid cover of the Traveling Wilburys' "Handle With Care," and the sprawling, main set closer "Next Messiah"--was effortless, joyous and resilient. For the encore the band stood arm-in-arm before a single condenser mic, as Lewis led them in a tingling "Acid Tongue." And the final song of the night, "Sing a Song For Them," dedicated to Deer Tick, punctuated her version of gospel: No eternal damnation, just a fiery, individualistic, secular revival calling.

See Fernando
The Charging Sky
You Are What You Love
Pretty Bird
Carpet Baggers
Bad Man's World
Jack Killed Mom
Silver Lining
Happy
Rise Up With Fists!!
Just Like Zeus (new)
Handle Me With Care
The Next Messiah