Despite labeling White Rabbits' performance at the Firebird last night a "homecoming show," at first the only parts that looked homegrown on these prodigal sons were the bottles of Bud Heavy they swigged onstage. Formed in Columbia and relocated to Brooklyn in 2005, the band's online bios play up this move as if they made the trek by covered wagon: "[WR] come to NYC via the arid plains of the Mid West..."

"I think our manager wrote that. Obviously somebody who's never been to the Midwest," said guitarist and vocalist Greg Roberts, speaking at the packed show.

If you're looking for a story about down-home boys selling out their turkey-hunting fatigues for skinny jeans and keys to success in hipsterdom -- or if you want to hear about local kids injecting the Big City with Mizzou-rah sensibility -- you're not going to find it through this looking glass.

But the band isn't a trippy tribute to Grace Slick, either: "People think we're a psychedelic band. People show up and get really mad when we're not what they expected," pianist and vocalist Steve Patterson said at the show.

What the members of White Rabbits are is pros. Last night at the sold-out Firebird, the indie rockers pounded through an intense, no-pause set of tracks from both albums Fort Nightly and recently released It's Frightening, propelled by their dominating rhythms and textured dual vocals of Roberts and Patterson. The six-piece includes two percussionists, but band members are multi-instrumentalists, everybody taking a turn to beat something -- tambourine, kit, hand -- building strata of rhythms until you swear the drums are chasing you through Jumanji. Exemplified by head-swinging percussionist Matt Clark, the prevailing drums give WR its full-body physicality, lending menace which takes songs from harmless to undeniable. 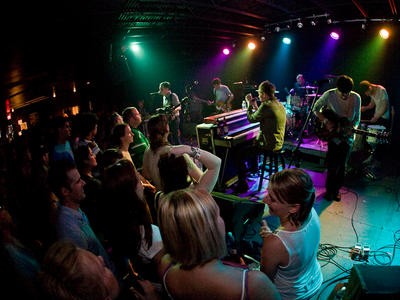 If the beats provide the darkness, they also leave space for daylight guitars and unexpected arrangements that unfold themselves like moving puzzles, such as the pretty breaks of "Midnight and I."

This is the sound that surrounded the crowd and had everyone, if not dancing, then certainly moving in time -- to one of the rhythms at least. The crowd was a mix of the usual (15-year-old girls text-googling opener Jon Hardy's Randy Newman references, undersize college kids in oversize glasses), the inexplicable (landing in Bro-ville, I caught this gem of an audience response: "Oh man, when we meet up with everybody getting out of O.A.R., we are going to be so wasted!"), and the familial. The place was packed with band members' families, friends, neighbors, etc., who appreciated the beat with bouncing feet and images lovingly captured on camera phone.

Asked by the tour manager before the show if he knew a woman who had just purchased merch, Patterson, originally from Troy, Illinois, said, "Yep, that's my old babysitter. Look out for my grandma. She's out there too."

This homecoming showed support for good music, and no matter genre, label, locale or family ties, everybody went ballistic for Frightening's single, "Percussion Gun": structured as the Brooklyn Bridge, currents pulsing like the Mississippi.