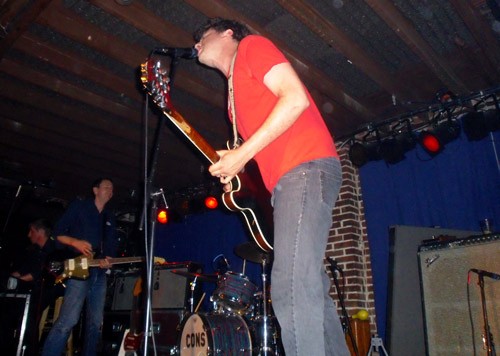 The good news for the Constantines is that on a Wednesday night in St. Louis, with no buzz and no promotional exertions, their draw is good for 100. That's double the attendance (I'm told) of their last show at the venue, some two years ago.

None of this should matter, but when a rock band this good, this critically adored, this awarded by Canadian judges, this veteran (ten years is a lifetime in indie rock), is selling their government grant-funded CDs for $5, pleading for lagers on stage, and a guy in the audience (a member of an indie rock band in town) calls out, "That's my Dad's favorite song!" (response from the stage: "Cool dad"), you get a sense that the Constantines' career course has run, they're doomed to a diminishing cult following, and they're just going to have to go on making smart, tense, steely rock music for its own sake -- which for an hour-plus show, is exactly what they did.

Local openers Old Lights started with a swift nine or so song set, the last of which I caught, and if their drummer could use some wood shedding, they sounded engaged and energetic, making keyboard-deepened Spoon rock, especially on songs like "Furthest From the Tree." They gave away CDs at the end of the show. "You've gotta try," the guitarist confessed.

Crystal Antlers from Long Beach, California followed, with considerable bitching about their sound (it wasn't that bad, dudes) and a drummer who ripped off his shirt with the second song. That's almost all you need to know, but not quite, as the Antlers' approach, something like a mash up of the Animals and Catfish Haven, with echoes of Comets on Fire and maybe Laurie Anderson, if high, minimalist keyboard drone counts as art rock, is hookier and less conceptual than Man Man. Those comparisons aren't intended to sound dismissive; the band makes the heavy psych and hipster percussionist battering work.

As a singer, bassist and leader Jonny Bell makes Craig Finn seem Berklee-trained, but he has something like pitch and control in his guttural cries. The set was angry, hard and surprisingly fun, especially the great cover of "It's All Over Now Baby Blue" (played straight out of the Them arrangement) which actually, believe it, had a few indie kids doing something like dancing.

The Constantines end songs better than most bands conceive of songs to begin with. Their set began with "Nighttime Anytime," perhaps the closest thing to a hit in their catalog, a handclapping, paranoid warm-up that sprawled (for this band, five-minutes is epic) and then stopped out of nowhere.

They mixed material from their four albums and recent recut EP Too Slow For Love, aiming at the heart of each song, with string-breaking strength, and a tightness within the chaos, driven by drummer Doug MacGregor. He's the secret force behind the Ontarians, a focused, no-bullshit player who balances the art-dented jitteriness of guitarists and singers Bryan Webb and Steve Lambke, pushing them to play louder and faster, one song to the next.

Songs like "Hard Feelings" and "Shower of Stones" are far less precise live than on record, but their conclusions are sudden exclamation points on declarations of fear and loathing. They snap you out of the fury, which if you pay attention to the lyrics and Webb's convulsive body language, could suggest, strange as it seems to say with a band this engaging, nightmarish origins.

Last night the band was clearly in bright spirits, Webb expressed genuine affection for the Duck Room, calling attention to the Howard the Duck display ("I used to buy weed from the guy who played Howard"), and with the celebratory young rockers' anthem, "Brother Run You Down," the best song from Kensington Heights, they had at least half the crowd (the other half yapped back at the bar) crushed up to the stage.

Webb quoted the chorus to a Rod Stewart song -- "Young hearts be free tonight, time is on your side" -- and it didn't feel ironic. The band played like time really was on their side--joyful, committed, and grateful to be the indie survivors they are.