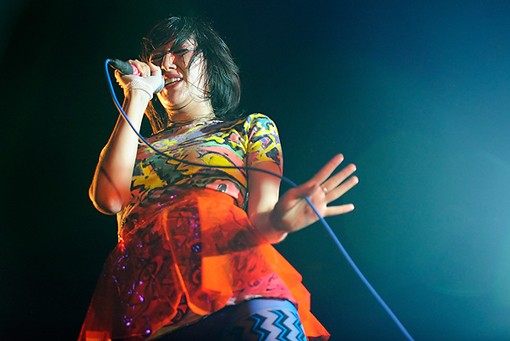 Yeah Yeah Yeahs' singer Karen O has crafted a persona as a shabby-chic fashion icon, a vulnerable diva, and some sort of female version of Iggy Pop. She has dated music video director Spike Jonze and is involved in the soundtrack to the highly anticipated film adaptation of Where the Wild Things Are. As the audience anxiously awaited the band's entrance last evening, their eagerness was twofold -- not only were 3,000 people about to witness a rock concert, they were going to see a celebrity. Even the elaborate scene that back-dropped the two opening sets -- a large white sphere protruding from the center of a wall surrounded by glittery circles that increased in size like a target - seemed to chant "O O O O O" in anticipation of the frontwoman.

Lights dimmed at 9:45 and a black-shirted crew member rotated the white sphere to display a gigantic eyeball. Karen O stalked onto stage, freezing into a ready position with her microphone held triumphantly overhead as the other two Yeahs manned their instruments. Hired gun David Pajo (formerly of Slint and the short-lived Corgan project Zwan) twinkled away on the piano intro to "Runaway", a ballad from the barely two-month old album It's Blitz! The crowd's unfamiliarity with the new tune translated into a respectful intimacy as O, covered in a half-kimono/half-shirt, moved in slow, zen-like motions and harnessed the most soulful range of her voice.

After the final chord of "Runaway" trickled off, O removed her dramatic drapery, screamed "Hello St. Louis!" and kicked her band off into Fever to Tell standout "Man", making it clear that Yeah Yeah Yeahs Yeahs are not the Karen O show. Guitarist Nick Zinner relentlessly attacked his Fender Stratocaster while Brian Chase pounded away with the jazzy flair of a Max Weinberg and the intensity of a bone-hammering chimp from 2001: A Space Oddessy.

As the dynamic frontwoman pranced across the stage, she seemed less like an attention fiend than an enthusiastic pre-teen dancing in front of the mirror to her favorite band: the duo of Zinner and Chase. During some noisier sections, she convulsed as if physically overwhelmed by each of Chase's cymbal crashes. At one point, as Zinner plucked one of his trademark shimmering tremolo leads, she kneeled in front of the guitarist and performed some hybrid of spirit fingers and the Wayne's World "we're not worthy" bows. Brian Chase can beat his drum heads like they owe him money, but he can also contain himself, put on a pair of headphones, and play with metronomic precision without seeming caged.

Resident fourth Yeah David Pajo -- who opened the show with a brief, charming, and defeatingly quiet set of acoustic tunes (including a non-ironic cover of "Where Eagles Dare" by the Misfits) -- filled out tracks from the YYY's last two albums with tasteful ornamentations of acoustic guitar, bass and keyboards and simply walked off stage when he wasn't needed.

Unfortunately, the Pageant's lighting and sound did not reflect the sort of full-band community the Yeah Yeah Yeahs displayed for one another. The spotlight shone full-blast on Karen O through most of the set, turning her bandmates into shapes of blues and reds even during lengthy instrumental passages. Her vocals were absurdly high in the mix, occasionally deflating the inventive guitar work of Zinner -- truly the Timbaland to O's Timberlake.

Once in a blue moon, Karen's microphone was loud enough to cause shrill feedback, which she masked by gracefully dancing away from the monitors. Other technical difficulties plagued the group, but the group played them off wonderfully. During the band's encore -- a questionable acoustic version of "Maps" -- Zinner bowed out after his guitar cable shorted out and O led the sold out crowd into a singalong of the group's most stunning love song.

All night, Karen O re-iterated her reputaton as a rock goddess. She casually dropped her neon tutu when singing "Taka-taka-taka-taka-takin' it off," traded off "oooohs" with front-row audience members, slipped into a leather jacket for the Peta-disapproved single "Zero," danced under a blacklight with hot pink nylons with fluorescent lit spiral piping over her face for "Heads Will Roll," and stomped on switches that blasted out clouds of red Y-shaped confetti -- one of three (THREE!!) different kinds of confetti that showered the audience and band throughout the set. The group appeared to enjoy every second on stage; there was never a moment where it seemed like the trio felt they were gracing the B-market city of St. Louis with their nearly iconic presence.

Throughout the Yeah Yeah Yeahs' set, I couldn't help but feel that the band's versatility has kept it afloat while its peers of The's (Strokes, Hives, Vines) have slowly sunk away. The band hit hard on the garagey songs from Fever to Tell, turned The Pageant into a rave for the buzzy dance jam "Heads Will Roll", and channeled New Order's propulsive synth pop for "Zero." The band's versatility is matched with unflinching consistency, and the Yeah Yeah Yeahs have never had a problem with the execution of their clever and sometimes brilliant ideas.

Sandwiched between the headliner and the acoustic opener were San Diego's Grand Ole Party. The trio was fronted by Kristen Gundred, who sang while playing drums standing up. Her unusual setup kept her from stepping into Phil Collins singing-drummer territory and its physical limitations lent itself well to the band's sparse, moody, and unashamedly simply tunes. Gundred's powerful voice was drenched in reverb and filled out every inch of the venue. In her softer moments, she evoked a little bit of Grace Slick (I wouldn't be surprised if Grand Ole Party gets a few Jefferson Airplane references when its album drops in September). When Gundred let her vocal cords loose and belted out her high notes she, well...sounded kind of a lot like Karen O.