Review + Photos: Nelly and the St. Lunatics at the Pageant, Sunday, May 17

Keegan Hamilton:
It was foolish to arrive on time. Our tickets told us that 'Doors open at 7 p.m.' but as soon as we arrived and saw the line wrapped around the block waiting to get in, we knew, deep down, that we were in for a long night.

It didn't take much time for the first act to take the stage. but it took oh-so-long for the headliner, the St. Lunatics, to finally stride onto the Pageant's stage. Nelly smiled coyly like he knew he was the king of all that he saw, and performed with the entire crew of St. Lunatics in nearly a decade. (City Spud, who was incarcerated in 2000, is now out of prison.)
In the meantime, there was a merciless bombardment of opening acts. It was more of a revue with each playing two or three tracks, ending with their single ("Request that shit!"), and moving on. East St. Louis duo Unladylike was particularly memorable, with the ladies belting out a stream of "mutherfuckers!" with angry growls and that belied their sexy appearances.

After the first five performers and an interminable club rap karaoke session it all started to blend together. It was the same bass line, the same crunk hi-hat, and the same hooks ("get money!"
There were some surprises -- Rich Boy showed up dressed in gaudy orange and threw some D's on the bitch, and Twista appeared and rapped so quickly and without anyone mentioning his name that he'd left the stage before we figured out who he was. Nobody seemed to miss Huey, who cancelled at the last minute. [AZ note: The drunk girl in the bathroom after the show was pissed Huey wasn't there.]
By the end of the third hour of opening acts, even the cramped, dance-happy crowd (which seemed to be a pretty even split between white and black and mostly middle-aged) in front of the stage seemed a little anxious for the real show to start. It was like being at a heavyweight title match with all the undercards going the full twelve rounds. 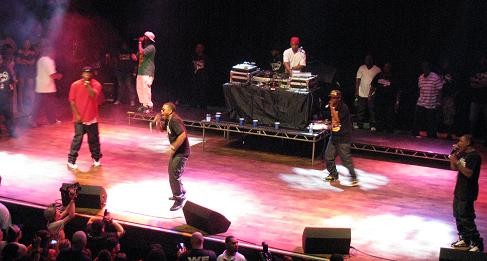 When the main event finally started, the lights went down and the man who made St. Louis hip-hop famous strode onstage -- and it was a moment to remember. It may not have been his most polished performance, with sound problems stopping things twice, but Nelly was clearly high on the crowd's energy and proud to be belting out his classic songs.
The Lunatics performed most of their hits early on. Murphy Lee's "Shake Ya Tailfeather," "Air Force Ones" "Stepped On My J'z," "Grillz" and a verse from "Country Grammar" all came within in the first six songs.
When Nelly finally paused and spoke to the crowd, it was like the significance of the moment had just dawned on him. "This the first time we all been on stage together since, what...? ''99? Damn..."

Eventually it was the other Lunatics' turn to sing a few songs. Nelly was happy to become the hype man and sipped a drink from a blue plastic cup as Ali performed one of his tunes. Then it was time for one from City Spud, and then one from Murphy Lee.
The atmosphere totally changed from the opening acts -- the crowd was more into it, the stage lights were better and the already booming sound seemed even louder. Coincidentally, this is when the speakers went out. No vocals for anyone holding a microphone on stage.

The delay lasted about five minutes before Nelly's "Batter Up" got things going again in a hurry. No lyrics says country (in the hip-hop sense of the word) like, "the fish don't fry in the kitchen, the beans don't burn on the grill."
After Ali's "Breathe In, Breathe Out," "Country Grammar" dropped. Nelly rapped at a mile a minute and nearly everyone in the crowd tried to keep up and sing-along to the quintessential St. Louis rap song. It was entertaining but over in what seemed like a minute. Then it was on to the next song, no fanfare or any special shout out for the platinum number one single.
Two songs later the microphones went out again and the posse on stage was clearly pissed. Nelly mouthed to the crowd that the show was moving to the after-party at Skybox but just as they were about to leave the sound came back on and he said, seriously, "Aww, since we're in the crib we'll give it another try. We're at home."

The energy was pretty much gone after the second round of sound problems and by the time all the Lunatics were rapping on the final song "We get money!" it was obvious what all the copy cat opening acts were aspiring to be.

Annie Zaleski:
I'll echo nearly everything that Keegan said about the night, and add in a few observations of my own.

Among the opening acts, Unladylike also impressed me; their rough-hewn flow and stage presence during "Bartender" and (paradoxical) dancefloor banger "Sit Yo Ass Down" showed promise (and sounded like an evolved version of the STL tinny-hi-hat/rumbling low-end sound). The three dudes who danced behind them for their short set were goofy enough to be charming.

Stevie Stone -- recently signed to Ruthless Records -- also displayed an incredibly professional demeanor, barking out his new single "Wait a Minute" and a few other tunes in a gruff rasp reminiscent of Busta Rhymes. Pretty Willie (a.k.a. PDUB) came out of nowhere and did a few songs. (He's also quite religious now, as most of his set was dedicated to the man above.)

As for the St. Lunatics: Yes, the sound problems ruined the rhythm of their set -- a shame, since the quintet was doing a great job riling up the crowd. But what struck me more is how much fun they were having, and how little Nelly's star presence came through. All five took turns hopping around the stage, going to the edge of the stage and taking a lead turn on the mic. (Murphy Lee especially lived up to his reputation as being the most energetic Lunatic.)

One would expect that Nelly might be the focal point of the performance, due to his more high-profile career. But onstage, he just seemed like one of the group, and had no problem ceding the spotlight, microphone and main part of the stage to his crew. I can't think of many hip-hop and rap stars who, a decade into their career, would be so unassuming.

Incidentally, the St. Lunatics talked up their upcoming album, City Free -- a playful twist on their debut, Free City, and likely a nod to City Spud getting out of jail. The crew has a new song, "Get Low 2 Da Flo" (which references the Stanky Leg).