Review + Photos + Setlist: The Killers and Chairlift at the Fabulous Fox Theatre, Monday, May 4

The important thing to remember about the Killers is that the band hails from Las Vegas, the city where the concept of time falls prey to glitz, fantasy and excess -- and the place that built a replica of great cities such as Paris and New York, thus manufacturing its own reality to fit its concept of entertainment. 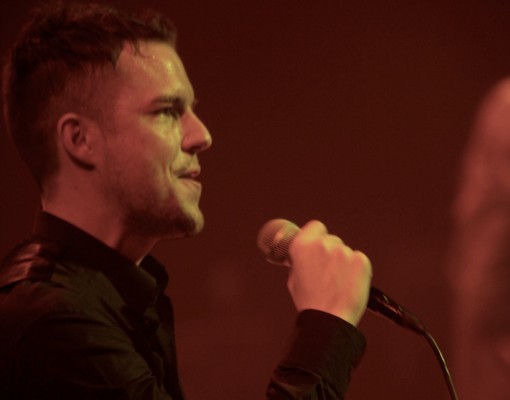 You see, this is exactly how to approach seeing the Killers in concert. Last night at a sold-out Fabulous Fox Theatre, the quartet (plus a few auxiliary musicians, including a sax player and keyboardist/violinist) proved exactly why it's a festival headliner in Europe and the U.S. Despite a few duff spots here and there, the show was solid -- and at at times transcendent -- with all the spectacle and willing suspension of disbelief one would hope to find with a Vegas-bred act.

By critical rights, the Killers are mediocre at best - thanks to melodramatic dance-rock tunes, badly phrased lyrics with incomprehensible philosophical quandaries ("Are we human/Or are we dancer?") and an inflated sense of self. But the pacing of the Fox set ebbed and flowed largely because of one-dimensional music. Songs had no real, solid harmonies to add variety to Brandon Flowers' melodies, while their anthemic chords and save-the-world builds became fatiguing after awhile.

A slowed-down, piano-driven version of "Smile Like You Mean It" and "A Dustland Fairytale" sucked the momentum from the set; "I Can't Stay," a bongo-driven ditty, failed as a breezy tropical excursion; and the Duran Duran-biting arena-disco "Joy Ride," no matter how punchy, was beyond cheesy. 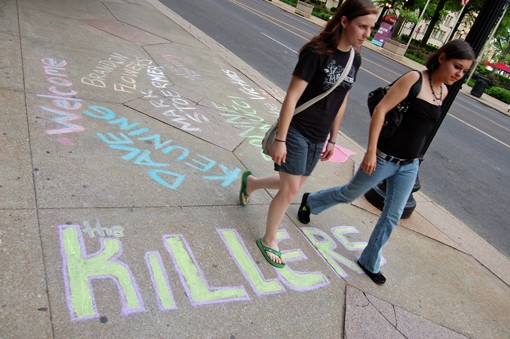 Still, these shortcomings dissolved in the face of the band's showmanship and musicianship. Drummer Ronnie Vannucci, Jr. was a monster behind the kit, tearing into rhythms and dancebeats like an animal devouring its prey. Mark Stoermer's basslines seared through highlight "Somebody Told Me" and a fantastic cover of Joy Division's "Shadowplay." And guitarist Dave Keuning, looking every inch a hard-rocker circa 1993 with his leopard-print shirt, leather vest and lion's mane of hair, held down the left side of the stage with quiet grace.

Clad head-to-toe in black, Flowers came across like a carnival barker, a shrewd purveyor of authenticity and soul. (For the record: This happens mostly after he shed the jacket that looked like a flock of pigeons committed suicide on its shoulders.) Indefatigable and optimistic, the Thin White Duke-thin Flowers stalked the stage like a preacher drunk on fire, brimstone and power. He punched the air in time to drums, stood on speakers and saluted the crowd, kneeled on the floor after being overcome by emotion and single-handedly stole the spotlight.

And by god, he might be singing terrible lines like, "When your chips are down/When your highs are low/Joy ride," and his stage banter might be stilted ("Is this a Killers performance? Or a Killers audition?"), and his voice might have one range (Springsteen karaoke) but he believes every word he's saying, that every word he's singing is burdened by gravitas. You have to give the guy credit for his earnestness.


Better yet, he's convinced the audience of this genius too. Right at the end of the main set, the band broke into "All These Things That I've Done," a U2-style marcher that grasps at gospel-song heights. The lyrics flash behind the band on a giant LCD screen. And suddenly, Flowers is hoisting the microphone stand into the audience, all of whom are screaming back: "I've got soul, but I'm not a soldier." The balcony is a swarm of arms, cellphones and dancing bodies. Even you, notebook-toting rock critic who's seen a million shows, is feeling a swell of emotion and communal spirit.

And then you detach yourself from the moment and realize that you have no fucking idea what that phrase means.

But it's too late: You've still bought the sentiment hook, line and sinker. You've been had, seduced by the false glamour and cardboard façade -- the one built by Las Vegas, and the mystique created by and around the Killers.

NYC's Chairlift opened the night by proving that it's the most authentic '80s-goth band around today - from the dim-blue stage lighting and gloomy guitar textures all the way down to the fashion: vocalist/keyboardist Caroline Polachek's leggings/oversized shirt/glittery scarf combo, vocalist/guitarist Aaron Pfenning multicolored jean vest and tousled hair and drummer Patrick Wimberly's humidity-wrecked curly 'do. 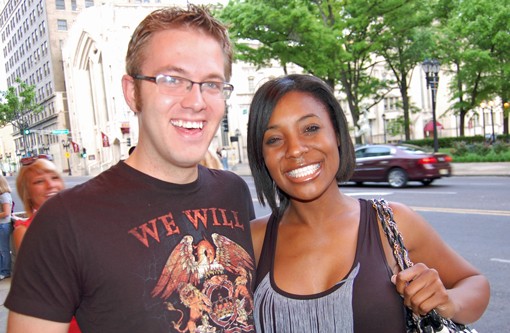 
The trio's music was also unique to modern indie rock: It's a combination of tribal-electro goth a la Dead Can Dance, the Cocteau Twins' ethereal fairy drone and the Cure's late'80s sprawls. As might be expected, this lead to many rather amorphous, drifting-out-to-sea songs. Pfenning's vocals were too whispery to be audible, and Polacheck's many twirls and hippie-dance spins became annoying instead of whimsical -- fast. The band's faithful cover of Snoop Dogg's "Sensual Seduction" was a bit, uh, confusing, although the uptempo beat excursion"Dixie Gypsy," 'Til Tuesday-biting "Planet Health" and cavity-inducing single "Bruises" came across well.

Overall, though, the set felt like a performance from a band in a second-tier '80s teen movie - the difference between, say, appearing in Some Kind of Wonderful (a fine film, yes, but Chairlift was more in the Flesh for Lulu diluted-goth vein) instead of adding darkness to Heathers.

Critic's Notebook: The Killers' light/stage show was fantastic. The stage was filled with neon-age tubes of light, multiple disco balls, mirror-covered pianos and a giant light-up "K," which housed vocalist Brandon Flowers' synths. (The fake cactus with Christmas lights, a giant ugly vase with flowers and multiple fake palm trees added bizarre - but somehow fitting - tackiness.) The strobe lights were actually somewhat nauseating - although the pyrotechnic showers of fire that fell during final song "When You Were Young" added just the right exclamation point. 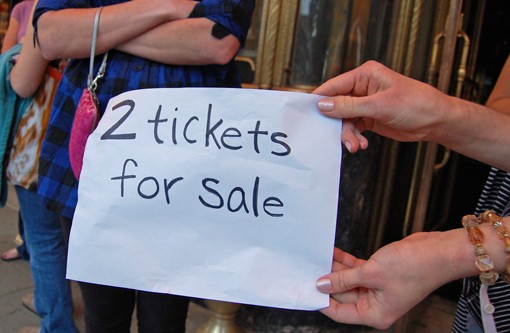 Killers Setlist:
"Human"
"This Is Your Life"
"Somebody Told Me"
"For Reasons Unknown"
"I Can't Stay"
"Joy Ride"
"Bling (Confession of a King)"
"Shadowplay" (Joy Division cover)
"Smile Like You Mean It"
"Spaceman"
"Change Your Mind"
"A Dustland Fairytale"
"Sam's Town"
"Read My Mind"
"Mr. Brightside"
"All These Things That I've Done"

Encore:
"Bones"
"Jenny Was a Friend of Mine"
"When You Were Young"