Have You Heard the One About the Rapper That Mooned The Nazis?

April 23, 2009 at 11:56 AM
comment
The National Socialist Movement (the American Nazi Party) held a rally in St. Louis on April 18 under the Gateway Arch, and in response, a large crowd gathered to protest the Nazis. Police and park rangers erected barricades to separate the two groups. 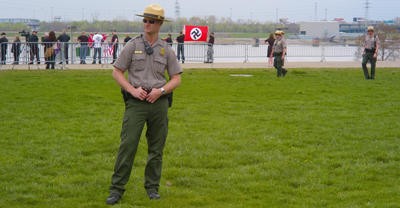 Several media outlets, including the RFT, covered the event. Here's the slideshow that was posted on the Daily RFT, to give you an idea of what the crowd and atmosphere was like.
Among the protesters was Tef Poe, a hip-hop artist from St. Louis. This fact might have gone unnoticed, if not for the caption on this picture submitted to the website for the Post-Dispatch: 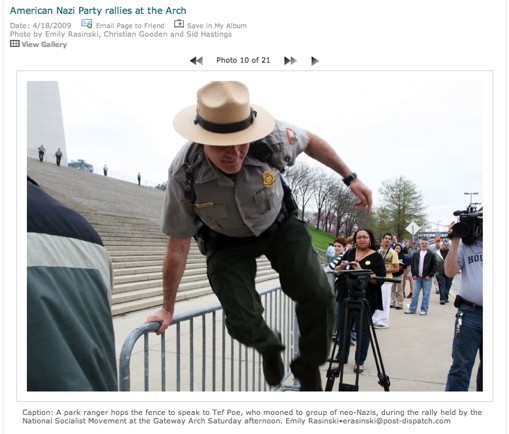 Intrigued, we called up Tef Poe to hear his Nazi mooning story. Here it is, verbatim save for a bit of minor editing for clarity and conciseness:

When I went to go down there I was amped. I woke up early in the morning, caught the bus like three hours beforehand. I got dressed up like I was going to a job interview. I was looking forward to it.

When the rally actually started about there were about 150 of 'em [Nazis]. They started marching and I went into go mode.

I started yelling all kinds of stuff. It was mostly funny to me that these guys are dedicating their lives to come out and do this. It's

I had the crowd chanting 'Wal-Mart, Wal-Mart' and stuff like that. One of the main Nazis started talking and when he stopped to take a breath I yelled ' 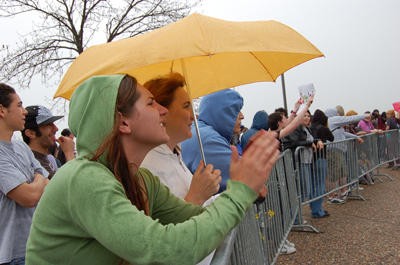