April 22, 2009 at 9:22 AM
comment
(Earthworms and Fresh Heir are currently touring around air force bases in England and Europe. Mathias from Earthworms is keeping a diary for us while he's away. Read on below for the fifth and final installment. The first one is here, second one is here, the third one is here and the fourth one is here.)

The next morning, we had to get up pretty early for breakfast with the staff before we hit the road to Mildenhall, UK. The bus ride to Mildenhall took about eleven hours. The bus was more than comfortable, so we didn't have any issues with that. Fresh Heir had a band meeting in the front of the bus, while Earthworms were in the back writing a new song over a Splitface beat. It's called "Down By The River" - look for it on the new album. We watched a few skate videos, and eventually made a stop in Genk, Belgium to stretch and stock up on supplies. If you hang out with us, you know of course that "supplies" means "beer."

There was a street market near where we stopped and some cool shops as well, so a few of us went for a stroll and checked it all out. When we got back to the bus, the group as a whole went on a bender for the ages on the way to Mildenhall. The first beer was popped open sometime around 1 p.m. It was 9% alcohol, as were many of the rest. I stuck to the 5% Jupilers, as I was the tour manager and had to keep my wits about me. We drove through Belgium and part of France on our way to England. In France, we went through Dunkerque.. a bigger city than I had expected. I am infatuated with WWII history, so it was cool to see a place where some historic shit went down.
When we finally got to the border, Armin drove the bus right onto the massive ferry and parked. The ferry ride was about two hours across the English Channel, and I ate some fish and chips that didn't sit all that well. I got through it unscathed though. The ferry ride ended at the cliffs of Dover, where all of the sudden we were driving on the left side of the road. We all knew it was coming, but it was still a trip. The Cliffs of Dover are beautiful, as is the English countryside we drove through on the way to the Royal Air Force Base in Mildenhall. By the time we got to the gate of the base where we had to all get out of the bus and check in, the group as a whole was a sloppy mess of drunken human flesh. Many had already passed out and had to be woken, and few were sober enough to contain themselves. 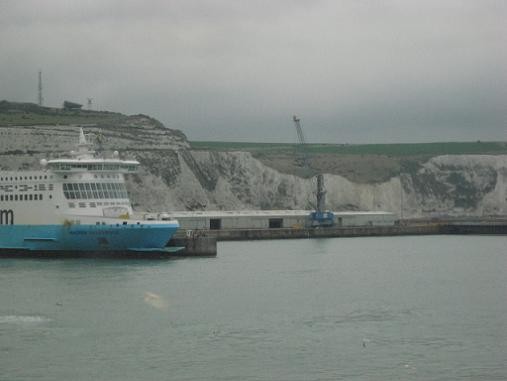 The armed guards at the gate had a good laugh and admitted us. The next day was the day of our last show. Everyone kind of did their own thing wandering around the base and reconvened for sound check. The Galaxy Club was a nice spot, and again provided for good sound. We had a really nice crowd turn out for this show, with more dancers than at any other performance as well. It was a nice way to go out. The next morning was brutal: Bus call was at 4:30am, as we had to make it to London in time to check in all of our equipment and get on a plane for Chicago, and eventually good ol' St. Lou.

I saw none of London, as I slept the whole bus ride to Heathrow. We had an unbelievable time in Europe. We played in places many of us never thought we'd even see. We saw some significanlty historical WWII sites (Garmisch, Graffenwoer, Schweinfurt, Dunkerque, etc), and learned what a professionally run tour is really like (as opposed to the seat-of-our-pants style that we are used to). Hopefully we will get the opportunity to do this again and again. The troops we played for really appreciated us being there, and in turn we very much appreciate the relationships we have built through this experience. There are a lot of good people out there in uniform, and we were blessed to cross paths with them.

I want to thank Armed Forces Entertainment for making this happen.. Frank Urtado at AKA Productions for being my tour mentor, CD Baby for hooking up the editor's pick, Annie Zaleski for giving me a platform in which to share our stories, and everyone who came out to a show while we were in Europe. Come check out Earthworms for free, May 21 in the Halo Bar for the official Atmosphere after-party! The show starts at 11 p.m. with Mahf on the wheels of steel. Look for an Earthworms / Fresh Heir Euro tour documentary coming soon.

Thanks for reading,
Mathias