April 22, 2009 at 4:47 PM
comment
Today's press conference about the July 14 Major League Baseball All-Star Game here in St. Louis had lots of details about the three-day fest, but nary a word about the musical talent who will perform during the July 12 to 14 holiday. 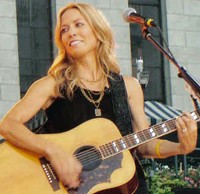 There will be a charity benefit concert at 8 p.m. July 11, under the Arch, said Tim Brosnan of MLB, but who will be performing wasn't announced Tuesday.

Brosnan declined to give the chances that Missourian Sheryl Crow, who has been rumored to play, would perform at the show.

"An event like that deserves its own announcement," Brosnan said after Tuesday's press conference.

Here are the rest of the details about that July 11 show, cribbed from the official press release:

Major League Baseball Properties will again host a free concert at 8 p.m. (CT) on Saturday, July 11. The All-Star Charity Concert benefiting Stand Up To Cancer will take place under The Gateway Arch at Jefferson National Expansion Memorial, a national park and the nation's tallest monument, creating the perfect backdrop for an outdoor concert on the downtown St. Louis riverfront.