April 21, 2009 at 5:08 PM
comment
(Earthworms and Fresh Heir are currently touring around air force bases in England and Europe. Mathias from Earthworms is keeping a diary for us while he's away. Read on below for the fourth installment; the first one is here, second one is here, the third one is here.)

Greetings from... Soulard. It's true, we're back from Europe. I didn't have any good opportunities the last few days of tour to write the last blog, so I am doing it now. Not quite as sexy, I know, but there are stories to be accounted for yet. 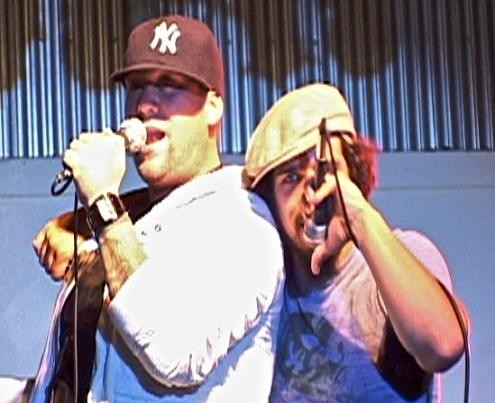 After a very informative lunchtime meeting with General Jones at Camp Bondsteel in Kosovo, it was off to the Netherlands. Our plane landed in Brussels, Belgium, and we proceeded to get back into the comfortable confines of our tour bus and drive to Brunssum, Netherlands. We met with our contact Harvey, and settled into our rooms in the Eisenhower Hotel -- where we proceeded to get drunk in Frank's room before we all passed out. The next day, we had a few hours to kill before sound check, so we hopped on the bus and rode into a town called Heerlen. Heerlen is a really cool city with a lot of great clothing stores, shoe stores, record stores, and of course, a proper coffee shop. (More on that later.) It was really nice to break away from what was a pretty hectic tour schedule and just walk around town checking things out for a while. The coffee shop wasn't open yet, so we all just wandered about shopping for new gear, but just being out and about in a foreign city was nice. Most of our time had been spent on military bases to this point. We eventually returned to the Air Force base in Brunssum, a multi-national task force base, and set up for the show.

The room we played in provided for what I consider to be the best sound we had all tour. It was called Club 13 and was set up for this exact type of thing. This show drew the smallest crowd of the whole tour, however, and at first I was really bummed out about it. I even got into an argument with Nick (Fresh Heir's drummer) because he was trying to get me to look at the positive aspects of the situation and I wasn't trying to hear it. He, being an extremely positive person, was of course right, and the show was probably the tightest one we played in the whole two weeks.

What made it all worth it was the family sitting at the closest table to the stage. It was a father, his son, and two daughters. They loved the show. You could tell his son (who was probably 13 or 14 years old) was in his element - hat cocked sideways, nodding his head enthusiastically to every song. After the show, they all wanted autographs and pictures. It was very touching, knowing that we definitely had an effect on them, the son especially. (We became MySpace friends yesterday. Shouts to Dustin!)

After the show... we went back to Capricorn, the coffee shop. This was fun. A couple of us took a cab and arrived before the rest of the group got there. Fresh Heir, not being big fans of coffee, went back to the hotel and drank two bottles of whiskey. (The aftermath was hilarious.) Back at the coffee shop, those of us who were first to arrive walked in the door, stopped and wondered what to do.. and then proceeded to the counter. There we found a menu of all the different types of coffee they boasted. It was an impressive list. While we were placing our order, the lady at the counter saw the stack of CDs in my hand and inquired about them. We told her where we were from, what we were doing in the Netherlands, and gave her a CD.

She proceeded to give us free hats, a jacket, and didn't charge us for the abundance of coffee we had ordered. By the time the rest of the group arrived, Earthworms was bumping from the speakers and a newly outfitted friend and I were sitting at a table getting ready to enjoy some coffee with the use of a space age coffee receptacle: a vaporizer. If you ever really want to enjoy coffee in its purest form, this is the way to do it. Yum.

So the rest of the gang joined us, where we thoroughly enjoyed ourselves for over an hour (they stayed open late for us) and met some really top notch people. The owner of the shop provided us with every vessel possible in which to enjoy our coffee, and hung out with us while he showed us the way of a master roaster.. pun intended. This was an important evening of letting loose. When we got back to the hotel, we found nothing but shenanigans. We jumped right in and stayed up too late.