(Earthworms and Fresh Heir are currently touring around air force bases in England and Europe. Mathias from Earthworms is keeping a diary for us while he's away. Read on below for the third installment; the first one is here, second one is here.)

Greetings from Camp Bondsteel, Kosovo!
Kosovo... is bananas. It is very difficult to know where to begin. In the two days we have spent here, we have had a week's worth of experiences. It has been unbelievable. We flew in from Frankfurt after our show in Schweinfurt, Germany, via a short layover in Budapest, Hungary (chalk another country off the list). We were met by our contact, Renee, and our on-base liaison, Lt. Jessica Felix. Both ladies have been extremely resourceful and extremely awesome. 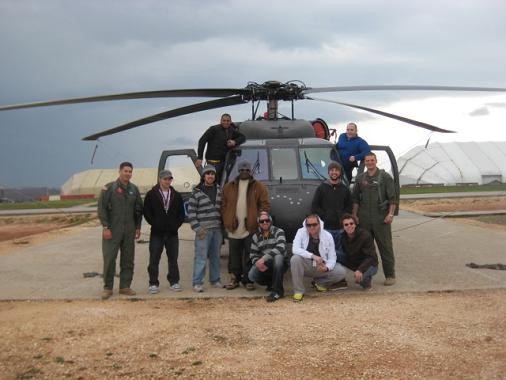 As soon as we got off the plane in Pristina (the capitol city), it was apparent that we were not in Kansas anymore. The airport was very basic, and we all stuck out like sore thumbs. We boarded a bus that took us across the city and a series of smaller villages, until we got to Camp Bondsteel. The bus trip was nothing short of eye-popping. This is a country that has seen a lot of brutality in the last ten years, and the evidence is still here. We didn't see missiles sticking out of buildings, but we did see the destruction that they caused.

Serbia really did a number on Kosovo (before the US did a bigger number on Serbia), but the people here are strong. The country is in a process of rebuilding, and a lot of the destruction has been replaced with new houses. There is no real industry other than agriculture in Kosovo, so the economy is in shambles. People deliberately don't put windows and doors on the upper floors of their houses in order to not get charged taxes for them, and the electric company expects everyone to pay an equal amount, no matter how much electricity they use. Street signs often have the name of the street or town in two languages, Albanian (the official language of Kosovo) and Serbian. More often than not, the Serbian pronunciation is crossed out with spray paint. There are still a lot of hard feelings here.

After what was definitely the most educational bus ride of our lives, we arrived at Camp Bondsteel. The troops here are on deployment from California, Alaska, Poland, Albania, Greece, Ukraine (and probably a few places I am not remembering). But most of the troops are U.S. troops, and 100% of them have their weapons on them at all times, even in the mess halls, gyms, recreation facilities, etc. In Germany, most of the troops we played for and talked to were wearing street clothes. Here, everyone is in full camouflage.

We had lunch with a colonel as soon as we got settled in our sleeping quarters, which are very modest -- they are called "cans." The rest of the evening was leisure time. We ended the day with a spirited evening of karaoke, highlighted by Kerry, Nick and Ryan's rousing performance of "Too Close" by Next. I have been in a band with Kerry for over four years and have never heard him pull out the singing skills quite like that. Spectacular. I rocked "Peg" by Steely Dan. 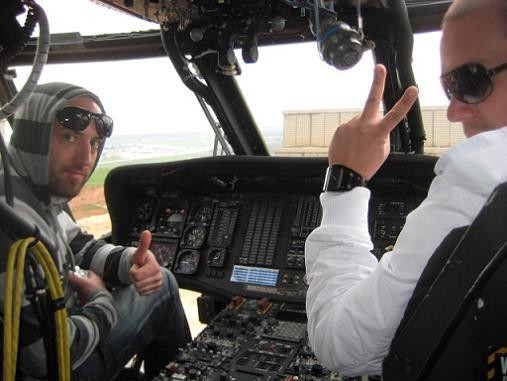 Today was the best day of tour, hands down. We had a good breakfast, and then immediately went to the aviation area of the base, which is basically next door to where we are sleeping. It was there that we were able to witness a Black Hawk helicopter starting up and taking off. Those things are fast.. ten seconds and you couldn't really even see it anymore in the sky. Following the take-off, we were given a thorough tour off a parked Black Hawk (we desperately wanted a ride -- no dice) where we were able to climb all over it and play with the controls.. and the gun.

The chief commander of the aviation unit, Sgt Ken Leonard, left no stone unturned. He loves his job, and why not? He gets to fly around in Black Hawks all the time. We were shadowed all day by a couple of great guys from Armed Forces Network, who will air the piece they are doing on us in over 30 countries around the world. Hopefully I will eventually have a link to that. One of the guys gave Kama an official army jacket. He is stoked.

After the Black Hawk experience, we met with Sgt Major Whittle, the second-in-command to the brigade's Brigadier General, at the Base's command center. He gave us the history of the base, and fielded dozens of our questions. He was a pleasure to be around, and eventually accompanied me to the mess hall for dinner just so I would have someone to sit with.

Next was the visit to the canine training facility.. this was amazing, AND hilarious. First, the trainers showed us the drills they put the dogs through, using top secret commands. These dogs are used for bomb sniffing, and are extremely smart and well trained. Then came the fun part. Three of us.. Desi, Lincoln, and myself (and I went first) were outfitted with "bite suits." One by one, we simulated a verbal altercation with the trainer -- turned around and ran -- only for the dog to run us down and attack us. It felt like getting tackled by a linebacker.. with very sharp teeth. The bite didn't hurt, due to the bite suit, but the landing stung a little bit. We have some very good video of this experience. Desi has the ass ripped out of his pants somehow, but we all came out just fine otherwise. The dogs were very sweet animals when not trying to rip us apart.

Finally the time came for us to play a show here at the camp. We has a nice crowd show up, the biggest yet by far, and we were very well received. Everyone we have met here, with no exceptions, has been fantastic and a pleasure to interact with. Most of those people were at the show amongst many we had not yet met, and everyone made a lot of noise. We ran out of EWMS Euro tour samplers tonight, forcing us to get some blank CDs so we can burn some more off for the remaining shows on tour - a good problem to have in my estimation.

One thing I need to mention is how awesome Fresh Heir is. Their set is nails, and they display warrior-like endurance every night we play. Mahf starts everything out with a 30 minute DJ set, and then Fresh Heir plays its set. Mahf then spins for another 10 minutes or so before we all take the stage. Fresh Heir is on stage for over two hours every show, as they are also our backing band.

After these last couple of days, I have a whole new respect and understanding for what our troops do overseas. This isn't Iraq, but it used to be a lot more rough than it is now. These days, the US troops are third to respond, as they are shifting more and more responsibility to the Kosovo police. The US troops are officially peace keepers at this point, not to say that things are always peaceful..

Tomorrow we wake up and get to go meet a General. Awesome. Then we will board a plane and fly to Brussels, where we will reunite with our tour bus and Armin the driver. Our next show is in Brunssum, Netherlands on Wednesday.. I will check back in with another blog after that show. Thanks for reading.. have a good week! Oh.. and Albert Pujols is not human. I can't wait to get back and see this team play. I have been monitoring the Cardinals from afar in the meantime.