(Earthworms and Fresh Heir are currently touring around air force bases in England and Europe. Mathias from Earthworms is keeping a diary for us while he's away. Read on below for the second installment; the first one is here.)

Good people of STL,
After a few days of wall-to-wall crazy, I am finally able to take a few minutes here on the tour bus to write some more about our adventures in Europe. Since we last spoke, Earthworms and Fresh Heir have played two shows and traveled from the German Alps to the German countryside. All of it is beautiful. Our first show in Garmisch at the Edelweiss resort was at a spot called Zuggy's Base Camp. The crowd wasn't huge by any means, but the 40 or so people who were there showed us a lot of love. Shouts to Sylvia and Mark.. a couple who hung out with us after the show and bought us some very tasty and potent Bavarian beers. Sylvia is a beautiful German lady who is approaching 40, but looks 30. 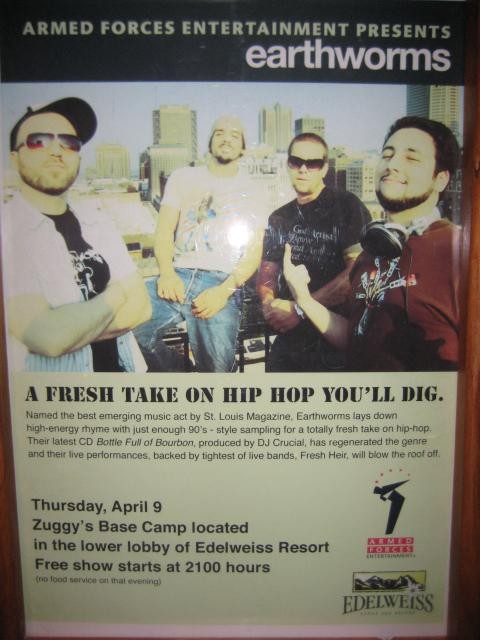 Mark is a career military man - 35 - who has one last tour of Iraq to look forward to. We had some great conversations. They look forward to retiring to Oklahoma in nine years when Mark's time in the military is up. We also met a great guy named Trevor who works with kids and spends most of his free time skiing. Trevor is a hip-hop head who completely appreciated our set, and knew every word to our A Tribe Called Quest cover of "Scenario." The marketing manager of Edelweiss is a really good guy named Brad -- he showed us a fantastic time and made sure we were given the rock star treatment by the resort.

Next was our four-hour bus ride to the Grafenwoehr Army base, where we played in a cavernous gymnasium to roughly 25 or 30 people. Apparently it is difficult to get the troops stationed there interested in going to the AFE sponsored shows. But again, the folks who showed up were extremely enthusiastic about us being there. Shouts to Autumn, Sam, Alex, Neville, and Mark for all of the love they gave us. The show was a good one. The sound was great (despite questionable acoustics in the gym) due to the mastery of Steve Blast and Frank Urtado, our traveling sound techs. You might know Steve as the guy who engineered Nelly's "Country Grammar" album with Jay-E. He is also the beatsmith behind "Batter Up." We are blessed to have him on this tour with us. Frank is a longtime sound professional who has been a great source of information and advice on this tour. He has worked with everyone from Britney Spears to Slayer -- the latter of which is his preference. Frank is pictured in my previous blog.

After the show, a few of the guys went to a local club called "Cheers," where in between spins of the "Cha Cha Slide" and every crunk song from four years ago (skeet skeet, y'all), Black Patrick was able to convince the DJ to put on an Earthworms joint. He and Kama performed the song to a packed club, jumping up on tables, etc. Apparently, it was off the chain. I was not there to witness it myself, but DJ Mahf gave me the play by play. I was stranded at the lodging where I caught some of a Blues game on ESPN America. Lame. They were winning when I fell asleep.

Today we are on our way to Schweinfurt, where we will play in another gymnasium, from what I understand. After the show, we must all try to get to sleep early as our call time to the bus is 5 a.m. We drive to Frankfurt and get on a series of planes that will eventually lead us to Kosovo. That should be quite an adventure, as Kosovo has been an independent state for less than six months. There was a lot of warring to get them there. We have been told that we will likely see "missiles sticking out of blown up buildings" by a guy who has been there pretty recently. Maybe an exaggeration, maybe not.. but I am sure whatever lies ahead of us in the next couple of days will be something we will never forget.

Thanks for reading -- more in a couple of days.