(Earthworms and Fresh Heir are currently touring around air force bases in England and Europe. Mathias from Earthworms is keeping a diary for us while he's away. Read on below for the first installment.)

Greetings from Germany! As I type this, we are at the end of a very long travel day involving two planes and a pimpadelic tour bus. It is amazing that after all the years of commercial aviation, it is still almost impossible to get proper sleep on a plane. Xanax may have helped, but I can tell you that the jet lag we all feel is profound.

However, we are in a beautiful resort town in Bavaria called Garmisch, complete with snow capped mountains and lots of very good beer. After we finally landed in Munich, we collected our gear (discovering that some less than smooth baggage handler spilled coffee on Ryan's keyboard while inspecting it) and met up with Armin - our very capable and congenial tour bus driver. He is a native of Germany, and is an excellent tour guide.

The bus is nothing short of rock star plush. Beds, a fridge (with a bottle of whiskey already in it), carpet, Playstation, flat screens, and plenty of room for the thirteen people on this tour. We found out Lit was the last band to use it before us. Hopefully we do it more justice than those unspeakable hacks. (Apologies to anyone out there who likes Lit.. actually nevermind. If you like Lit, you have no taste and deserve to be ridiculed. I digress...) 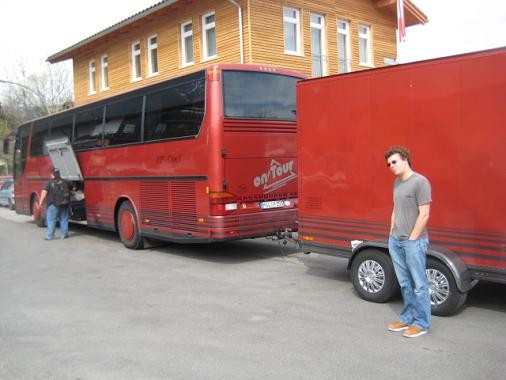 So basically STL hip-hop seems to be coming up in the world. I feel like we stole something and are totally getting away with it. In actuality, we are here because the good folks at Armed Forces Entertainment (a dept of the DoD) found us on CD Baby due to our status as editor's pick, and we are blessed to be in this situation.

We started the bus ride with a stop at a gigantic grocery store, where you could also purchase a motor scooter, a complete wardrobe, and outfit a garden with all the bells and whistles you could imagine. We, however, were there for beer. Bavarian beer is widely considered to be the finest in the world, so we stocked up properly. (I also couldnt pass up the bottle of Jim Beam.) The tone of the day was really set by the visit to the Jagermeister tent, where we learned that mixing jager and orange juice was a tasty breakfast drink. After this eventful trip to the store, we rode the bus into Garmisch.

Garmisch is like the Aspen of Germany. It is stunningly beautiful. Some of us continued the bender, while a few of us were too destroyed by jet lag and had to take a nap. I was one of those people, and that is why typing this blog is currently possible. As I enjoy this Budvar I am sipping on, we have our first show of the tour to look forward to tomorrow at the Edelweiss Ski Resort, on the highest mountain in Germany. We are also being hosted at the resort tomorrow.

One thing to remember is the reason we are here: to entertain American troops who are far from home, and have been for quite a while. Some are recently returned from Iraq, while some are awaiting deployment to Afghanistan. These folks are going to appreciate our presence here, and we really look forward to rocking them thoroughly. Lastly, I want to take this opportunity to thank everyone who mobbed up and packed Off Broadway this past Friday night for our tour kick-off party. We were definitely sent off with a lot of love and support. Thanks for reading -- be back with a fresh entry and more pics in a day or two. Go Cards!