A couple of years ago, I wrote about Dave Simon's Rock School, and specifically one of its bands, the Junior Mints. Well, the mom of one of them, Blake Stumpf, wrote in to note that the now 15-year-old recently won a guitar-solo contest that took place at the Watson Road Guitar Center last weekend. (St. Louis was one of 15 cities participating in the contest.) His prize? $100 in GC credit and a week-long stay at Camp Jam's Rock 'N' Roll Summer Day Camp.

Stumpf -- who is now in a local band called Morland Drive -- also had the honor of jamming with Jimmy Griffin before the contest, on a song by Shinedown. Check out a photo below! Stumpf's on the far left. Oh, and the Junior Mints no longer play together, but they still keep in touch, says Stumpf's mom. 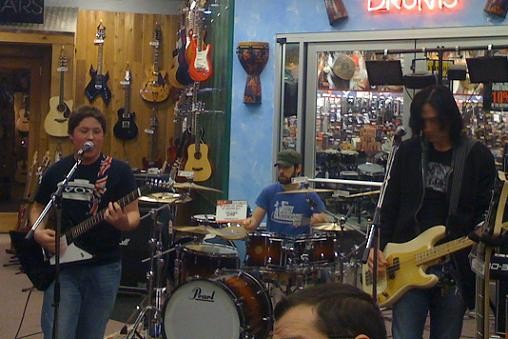