Raleigh, North Carolina's Rosebuds made what it said was its first stop in St. Louis (really? wow) last night opening for Megafaun at the Lemp Neighborhood Arts Center. The quartet's set was loose and house party-like, as it ran through a short set of gothic synth-folk.

Seriously, that's the only way to describe the quartet's music, which has evolved from spritely power-pop into something far gloomier and atmospheric. The opening cut, "Life Like," resembled a murky Joy Division dirge, while the bouncier "Get Up Get Out" unfurled like a Saint Etienne romp. 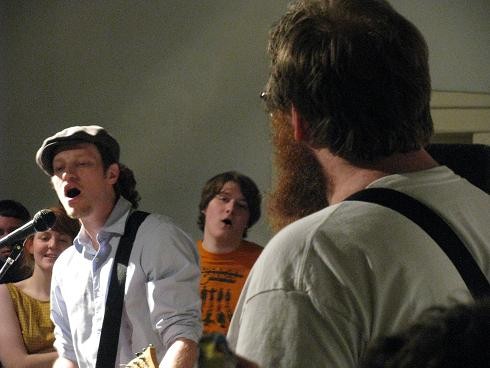 The band was clearly enjoying the low-key, living room atmosphere: For the last song, "Nice Fox," it encouraged the audience to crowd around and sing the tune's refrain, as Ivan Howard strummed on an acoustic guitar and Kelly Crisp tried playing on an out-of-tune piano (before giving up and returning to her Casio keyboard).

Before that, the act decided to radically rework older tune "Back to Boston," by asking audience members to choose numbers -- which then corresponded to pre-tuned rhythms and basslines on a Casio keyboard. The results were tropical and funky -- and quite silly, as my video below shows. That sort of summed up the show, which was a charming experience and low-pressure, exuberant time.

After the Rosebuds' set, I raced over to the Billiken Club for Beach House, a show that was at capacity(!) However, I slipped in and heard -- although I was too short to see the band because it was so crowded -- the set, which was full of viscous dreampop and sleepy-time slo-core. Live, vocalist Alex Scally's vocals reminded me quite a bit of Ben Bridwell from Band of Horses, although when Victoria Legrand took the mic, Beach House transformed into what my ears sounded like a modern-day Opal. Found some video online from the show that actually shows the band, while Todd McKenzie wrote up something good about the show, which I'll defer to, since he's a huge fan and summed up the show best.