Tonight at the Billiken Club, dreampop duo Beach House are playing a free show with Raglani opening. Todd McKenzie previewed the piece in this week's paper and also interviewed Victoria Legrand, a chat found below. 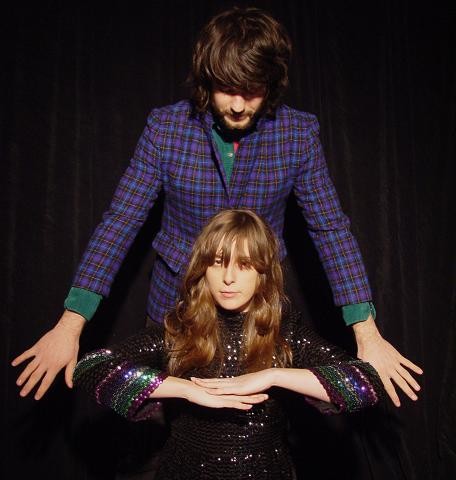 You've been around for about three years and two albums, and you seem like an established band. Where do you see yourselves going next from here?

Hopefully continuing that process and continuing down that path. Alex [Scally] and I hope to be making music for a really long time. We're really excited right now and we're having a great time writing. We have a new practice space, a giant storage space that's next to a tie factory in Baltimore. It's a giant room that we just moved into last week, and so we're just really excited right now.

Are you experimenting with the sound of the room, with it being a large space with a lot of natural reverberation?

The room is actually very silent, and so what we've discovered is that we've been practicing and writing in a really small room in Alex's house, and now that we've moved into this large room we can hear everything so much better, and it's really helping. That's the thing that we've really noticed - the clarity of being able to hear everything, and I think it's really going to help us cultivate each new song that we make.

What is the new album shaping up to sound like?

It's hard to say. So far, it's definitely intense, there's definitely a lot of emotion. We'll see what happens once the collection is together, whenever that moment happens. But right now we're just really enjoying it; it sort of feels like it did before the first record - full of life. We're in a good place right now. We're resting. We've toured a lot, so we now have all these experiences behind us, and we've also grown a lot in our listening abilities and in our songwriting capabilities. So we're just practicing, and it's a great feeling to be practicing things that you've learned and absorbed, and we're just realizing now, you know, the way we perceive things have changed but in a really complimentary way to our aesthetic, or sound, that we already have.

Both you and Alex are classically trained musicians. Do you feel that training helped in any way in forming your aesthetic?

Yeah, music has been a part of both our lives since we were children. Alex is trained on bass guitar and I've been a trained pianist since I was little, but I stopped studying when I was 18. I pretty much started writing after that.

I definitely feel like the classical background is beneficial to our aesthetic. It's not something that we consciously revert to, but it's such a helpful tool in being able to formulate an idea. It helps so much to express abstract ideas, so I'm definitely grateful for that. Sometimes we'll notice that some things we write are more classical than others, but I just think it's been a really important backbone for both of us.

And you even had opera training for your voice, is there any chance we'll ever see a Beach House rock opera?

[Laughs] I don't know. I would have to say maybe not, but we'll see what happens. Maybe a dance opera...

Well it seems that if it could be pulled off anywhere, it would be Baltimore. The whole city has been exploding with creativity lately. Just this past fall you were part of the Baltimore Round Robin [a touring circus of assorted musicians and visual artists from Baltimore that took up two-night residencies in cities across the country, organized according to "Eyes Night" and "Feet Night." Beach House was grouped with Eyes Night]. What was that like?

It was chaos on wheels, but it was self-contained chaos, so we got a grip on it. Within the first week everything kind of fell into place. Every time we would get it all set up we would just look at each other and say, "I can't believe this is really happening. Sixty-one people and no place to stay."

How was that organized?

Rose Chase was kind of our leader figure, and then everybody else helped. There were just a few people who would organize everybody into the vans and the bus, and people volunteered to do sound or volunteered to cook for everybody, so it was very volunteer-based.

Rose is a wonderful lady here in Baltimore who is just really good at helping everybody out, and you need people like that when you have a little disorganization. You need people who are a little selfless.

Is there a chance that the Round Robin will be reprised sometime in the near future?

I think they're trying, but it will probably be an edited version. It probably won't be as huge. I've only heard a little rumbling, but I don't know if it'll actually happen.

What is it about Baltimore that makes it such a vibrant local scene right now?

Hmm, I know that there's been a lot of people from, like, North Carolina moving here. I think people are sort of moving here a little bit; I've definitely noticed new faces. So people have a little excitement and they want to come here and start bands in their little communities. I think it's that it's just not very large, and so whatever's happening within that not-so-large area makes it really intense. And for the smallness of the city there's a lot of activity. I think if it was a bigger city it would probably be more diluted; it probably wouldn't feel like everybody has a band. But it does feel like everybody has some thing that they're doing, whether it's art or music or noise. Things spread really fast here, too, within itself, and people get excited and act crazy and stuff. It's really infectious. It has a lot to do with its size, you know, the concentrated amount of creativity in a not-so-big city.

I understand you offered some guest vocals on the new Grizzly Bear album, Veckatimest, which has been getting a lot of press. What was that experience like?

It was fun. I was really flattered that they asked me to do that. I went up there in just an afternoon and recorded in their incredible practice space, because they had a church basically to themselves, and it was fun. I got to sing it live with them this past weekend, and I tried not to screw it up too much. [Laughs] It's hard to jump on stage when a band's already been playing and you gotta get right into their energy. But it was fun and I'm really grateful that they thought of me for that.

Your music with Beach House seems very solitary to me, like it's ideal to listen to on headphones. What can we expect from a Beach House concert?

Well, generally our concerts are more intense. Sound-wise, they're thicker. I think there's slightly a little wild energy. It's definitely a personal experience for many audience members, you know, if they have their songs they like to hear and how it can be a personal experience. I think it can also be a romantic experience [laughs] for some people. There's been a lot of making out at our shows, I'm told, so we're obviously tapping into some sexuality in people.

We've also been working on visuals. We won't have any for this tour we're about to go on, but I think for our future record we're definitely going to invest in visual things, projections, try and really fuse the visual with the music. I think that works well with our sound.