On a good night, the Drive-By Truckers can go toe-to-toe with the heaviest of the heavy weight rock bands currently touring the planet. Saturday night, however, was not a good night. 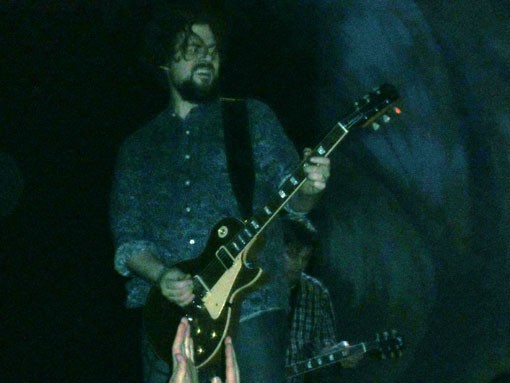 Lay the blame at door of the Pageant, whose silly decision to bar booze from the dance floor had the unintended but inevitable consequences of limiting the numbers of hardcore DBT head bangers and enforcing near-sobriety on those who ventured down. This was an all-ages show but I saw no one under the age of 25 on the floor. If the venue's bar ring was sub-par it need look for no further evidence. A weird lack of enthusiasm permeated the room, and by the end of the show, the guitar tech had to demand the crowd respond with more than just a stray whistle.

Or maybe the shitty weather or the rescheduled date--the band was to play St. Louis in February; Patterson Hood's pneumonia forced the cancellation--put a damper on the evening, or perhaps it was the sketchy sound--I've never thought I'd say that a DBTs' show could have been louder or punchier--or a set list that reshuffled much of the far greater show a year ago at the same venue. Opening with "Uncle Frank," one of Michael Cooley's strongest songs from the early record Pizza Deliverance, the band eased into the usual format of alternating Cooley tunes with Hood tunes, breaking the structure only for a couple of cameos from bassist Shonna Tucker, who (the shock of it) became progressively more sloshed as the night went on.

With the second number, the grinding standard "Lookout Mountain," the band unveiled the buzzards-over-badlands backdrop and seemed about ready to hit the boards full bore, but no, not quite, not even on Cooley's excellent "3 Dimes Down" or Hood's follow-up, "Hell No, I Ain't Happy," with increasing presence from keyboard player Jay Gonzalez. At least on Tucker's first song, Brad "Easy B" Morgan got in a drum solo and on the first great performance of the evening, a gut-check "When the Pin Hits the Shell," which Cooley sang fiercely, Gonzalez stretched out a thick, mean electric piano solo. 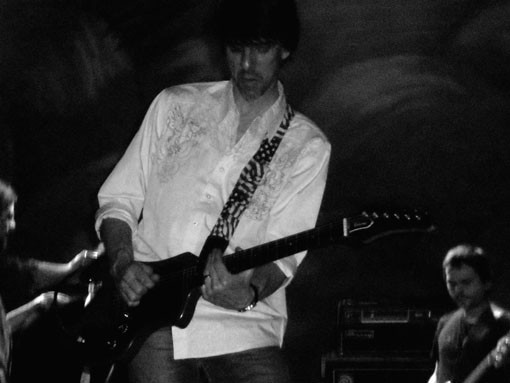 For most of the night the band just played--hard, well, expertly--but within certain invisible confines not really of their own making but which they couldn't escape. The gap between them and the audience was palpable. Guitarist John Neff seemed particularly detached, playing quietly and unassumingly stage right. The button-down collar didn't help. He's a tasteful player, and a welcome addition on the pedal steel, but at some point, Skippy, you have to step to the apron's edge and take a solo like a southern rock man. During the main set, he never did, but the encore would be a different story. 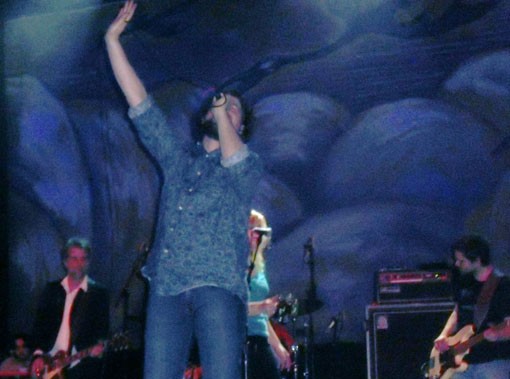 A handful of acoustic numbers--including "Two Daughters and a Beautiful Wife," from Brighter Than Creation's Dark, with Cooley on banjo and the epic "Opening Act," one of Hood's best story songs--made more of a connection than stalwarts "Sink Hole" and "Devil Won't Stay," but the three final numbers of the main set, "Puttin' People on the Moon," (with a great, noisy, chaotic climax), Alice Cooper's "Eighteen," and the grandest manifesto from Southern Rock Opera, "Ronnie and Neil," the band was finally no long merely playing but living the songs.

And the audience responded. The delayed encore began with a roaring, angry "Shut Up and Get Your Ass on the Plane," an ecstatic "Let There Be Rock," with Hood demanding the audience get to their feet and join his exaltations with a mic stand in the air, and Skippy finally loosening up and stepping forward, as opening band Don Chambers and Goat joined the band on stage. Hood knelt down and spliced Springsteen's "State Trooper" with "Buttholeville" and a frenzied howl of "Right Wing Politics! Right Wing Politics!" It was a strange and fitting catharsis for a strangely conservative evening.