This week's homespun column is Christian Schaeffer writing about Bob Reuter's new album, Bob Reuter's Alley Ghost. He had this to say:

On Alley Ghost, members of the Rum Drum Ramblers, 7 Shot Screamers and Johnny O & the Jerks back Reuter with snare drum, banjo, upright bass and harmonica. The resulting songs are an inspired mix of young and old -- Reuter sounds invigorated by his younger counterparts, and the young Alley Ghost stallions put their love of prewar music to good use. Certain tunes rely on well-worn folk-and-blues arrangements, while other songs capture the off-the-cuff feel of a guitar circle.

Read the rest here, and marvel at the show flyer drawn by Don Beasley below! 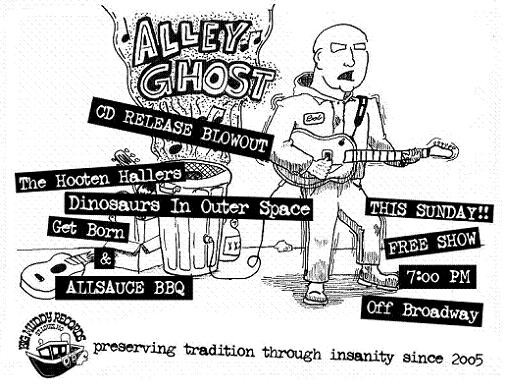