March 26, 2009 at 10:00 AM
comment
The old Soulard Library was only in service for 52 years, but the big brick building on Lafayette Avenue is going to retain its name as a bar and concert venue.

Angel and Matt Bostick are reopening the 7,000 square-foot building at 706 Lafayette Avenue as a rock club, with room for an estimated 500 concert-goers. It'll be called the Library, naturally. The Bosticks formerly operated Cruisin' Rte. 66 Bar & Grill (7895 Watson Road), which opened in 2006 and closed this past February. (Read a history of that establishment.)

About 20 people are going to be on staff at the Library, which will be open as early as Friday, March 27. It'll be a 1:30 a.m. bar and will be closed on Sundays. Angel Bostick says the definite opening date depends on receipt of permits from the City of St. Louis. 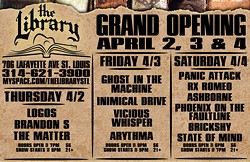 While the other bars in the neighborhood focus on folk, blues or jazz music, the Library is starting out with a hard rock approach. And no cover bands, Angel Bostick points out. (Cruisin' 66 was an all-covers joint when it opened.)

The Soulard Library opened in 1910 and closed in 1962, says Adele Heagney, local history specialist for St. Louis Public Library. The building has since been occupied by different establishments over the years.

"A lot of the branches that were closer into the city closed because the population was moving out. In the early '60s, there wasn't much population left in Soulard, in fact the whole neighborhooed was going to be razed, as were a lot of downtown neighborhoods. How Soulard escaped it, who knows?"

Angel Bostick says over the past two months of renovations to the Library, little has changed regarding the interior -- other than some major cleaning.

"I really love the historic look of it, we've kept it pretty much that way," she says.

For now, the Web site for the Library is located at the old Cruisin' 66 MySpace.