Where to begin? I should start with the ornamental comb, like three white gleaming stakes from some Gnostic purification ritual, holding a jet-black stack of hair atop the fiery head of Polly Jean Harvey. She's never wanted for making an impression. Wrapped in white, backed by a hard avant-garde blues band (the warm up music was a Howlin Wolf mix) that looked like they'd just gotten away clean from an S & L hold up circa 1945, PJ approached her "showcase" (a ridiculous concept in her case) like she knew as well as anyone else that a landlocked date in the states is as rare as diamonds. Not everyone gets it. "What's going on here?" a 25 year-old neo-preppy with a press-credentialed badge asked as I waited in line outside of Stubb's. Informed it was PJ Harvey, dude says, and I quote, "Never heard of him. Doesn't sound like something I'd listen to. It's probably from a different era."

Probably. Harvey, along with long time friend and collaborator John Parish, focused on new songs from the forthcoming A Woman, A Man Walked By, starting off with "Black Hearted Love," a seared, Plathian rocker, with martial drums, heavy on the toms and eerie banjo riffs. Then they flew into another new song, with chanted lines "There's No Laughter in the Garden!" and on into "Urn with Dead Flowers in a Drained Pool," a recitation/song from her 1996 album with Parish, Dance Hall at Louse Point. Though the set had none of her landmark material, the new songs and obscure, forgotten tunes were riveting, even when at their most absurd and Dr. Suess-like, as with the title track from the new album: "He had chicken liver balls, he had chicken liver spleen, he had chicken liver heart, made of chicken liver parts..." lines no other singer I can think of, and no other band, with its spare, hard improvisations, could pull off.

On Saturday night, Friday afternoon felt like another era, and it was, with a strong, twitchy set from Brooklyn's Bishop Allen at the Hot Freaks party at Mohawk's. There was a quick Crazy Horse-crazed suite from New York's Chief at the Beauty Bar.

There were new songs from LA's Great Northern at Red Eyed Fly. 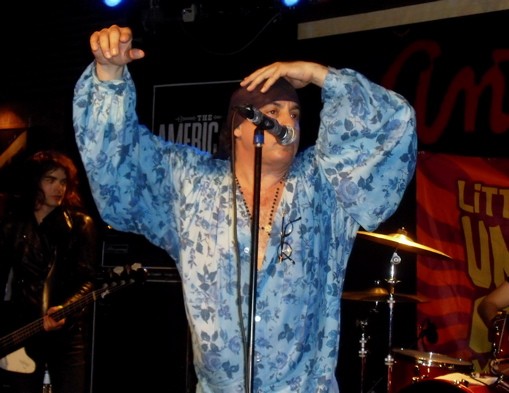 A final day party of Friday took me to Antone's, for Little Steven's Underground Garage show, featuring the affable Silvio Dante himself, and St. Louis's own Living Things, who played just three songs, all hard and chunky but, alas, not free from political gratuity. Lead singer Lillian Berlin has gone from burning pictures of George Bush on stage to burning dollar bills (a $20 would have been somewhat more impressive). If you'll pardon the cliche, their music should and could have done the talking.

Rochester, New York's The Chesterfield Kings followed, as loud and splashy as a DC-9 landing in the Hudso. They opened with "Up and Down," the strongest song from their most recent album Psychedelic Sunrise, and overall slashing together early Stones and eternal Ramones, with lead singer (and skinniest androgynous hipster at SXSW) Greg Prevost kicking cups and flinging napkins, in some kind of rock tantrum explained by a stone-faced, motionless, un-rock and roll crowd. That doesn't mean, however, they weren't fantastic. They were.

I spent Friday night's first showcase amid the terrible sight lines of the Cedar Creek Courtyard, trying to hear the plush and whispery Beach House. 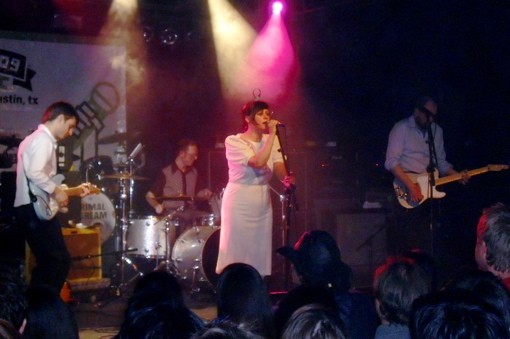 Unable to evade the chattering classes, I fled for La Zona Rosa where Camera Obscura was debuting new material as part of a Scottish showcase. With trumpet, second percussion and the essential church organ keys, Tracyanne Campbell and company sounded just like the records, which in this case is what you want. The songs from the forthcoming My Maudlin Career are as hooky and economical as 2006's Let's Get Out of this Country, and nearly as well-received as "Lloyd, I'm Ready to Be Heart Broken," which had the crowd mouthing every line.

A cabbie got me to Loney Dear's set at Habana Calle in time to witness the lederhosen kid yelp and strum over a band-in-a-box laptop (he had a rhythm section and a keyboard player, but apparently Emil Svanängen prefers karaoke) and I was so far from feeling it I thought I'd pass out from the cute, not-trying-and-proud-of-it anti-attitude. 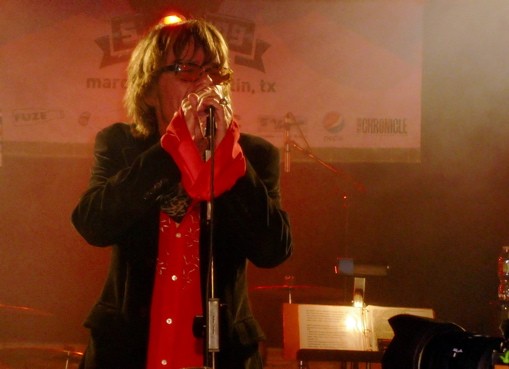 The night was not lost, however, as the New York Dolls were still to play at the Smoking Lounge, and play they did, for over an hour, with strong new material and indelible oldies like "Personality Crisis," and David Johansen smiling and growling, Sylvain Sylvain, hamming up every solo, and song after song hitting like the band -- or what remains of it -- really did invent punk rock.

I could have ended Saturday then and there, save that I wanted to catch Samantha Crain and the Midnight Shivers at the Alehouse, and was happy to have done so, though it meant sitting through the sub-open-mic tunelessness of LA's Terra Naomi and the mildly entertaining vaudeville folk of Miami's Rachel Goodrich. Crain and band, however, rocked the freaky folk much harder than I expected.

After PJ Harvey's set, I scrambled to make it into the first ever show from Jimmy Webb and the Webb Brothers, the father-and-son team, at the miserable basement bar Prague, and though they only had time for half a dozen songs, the songwriting master sounded splendid on "Galveston" and "Wichita Lineman," two of the greatest songs in the English language (which Webb just happened to write). If the forthcoming family album sounds half as good as their South By set, it will be Best of 2009 worthy.

The Rosebuds began the wind-down of the night, in the Parish club crammed with dance rockers who responded quite well to a couple of almost country-ish acoustic numbers but mostly loved Ivan Howard's electric chord chopping and Kelly Crisp's thick keyboard surfaces. The band is expert but perhaps a little cool and disarmed, and the crowd deserved just a little more enthusiasm from the duo (I'm one of those old fashioned types who believes such things).

Instead of closing out SXSW as usual with the Waco Brothers chaos at Red Eyed Fly, I headed across Sixth Street for Black Joe Lewis and the Honeybears, a soul and blues band who are beginning to pick up steam outside their home town of Austin and who were slated for 1 am.

Something, however, was going wrong on the Buffalo Billards stage. The drum kit was behind plexi-glass, the stagehand was checking three wireless microphones, and three young white guys wearing yellow pajamas were the only musicians in sight. By 1:30, the band started up a Super Fly riff, and announced that it was star time. Out came three young and very attractive African American women, also wearing some kind of matching pajama-like outfits, dancing and singing and urging the crowd to do the same. I surmised that this was Black Joe's idea of a soul revue warm-up, but then another song followed, and another, and another. I looked at my schedule: Solange and the Hadley Street Dreams of Houston, Texas were to have performed at Midnight; evidently they did not. Solange, for those keeping score, is Beyonce's little sister, and a pretty solid singer and dancer, though her band that night was a bit by-the-numbers.

Black Joe finally made it to the stage around 2 am, and promptly introduced his first song: "This is for Solange, who doesn't know when to get off stage. Bitch, I love you!"

But instead of doing that most notorious of his novelty number, the band just blasted through a shortened, sound check version, with the horns and bass locking in, and Black Joe raking his guitar with punk-blues speed. The Honeybears are not the tightest soul band on the planet, but they can still electrify, especially when Lewis gets down on his knees, James Brown style, for their original homage to "Please, Please, Please."

After three songs, it was past closing time, but the crowd wouldn't let them go, and someone's manager came up on stage to give them another three. The set -- jumping, angry, focused, fun and loud -- was the kind finale SXSW more than deserved.