March 13, 2009 at 11:29 AM
comment
What: First punk show at a two-story tavern in Soulard.
Where: Tip Top Food & Spirits, 9th and Victor streets, home of the RFT's "Best Bar Food" in 2008.
Why: Because a show at a new, intimate venue is cause for excitement.
Who: Baltimore's Deep Sleep, New Jersey's Psyched to Die, and locals the Humanoids and Sack Lunch of St. Louis.

There's regular time, and then there's punk time. So when the flyer for a show says "8 p.m." it's going to be more like at least 45 minutes to an hour after that before any riffs are played. But the regular delay actually served a purpose Thursday -- besides more time to drink, watch the Blues hockey game and socialize, about 50 people took time to explore Tip Top Food & Spirits, a Soulard establishment that opened this past year a few blocks from the ABInBev brewery. The tavern hosted its first show, and it's safe to say that besides this reviewer, most people hadn't ventured into the bar before. The gig was held in the upstairs portion of the place, which had three rooms, the fourth quarter occupied by a staircase to the downstairs dining room.

Set up in the far eastern room at 9:07 p.m. was Sack Lunch, a pop-punk band that shares members with other local hardcore groups Suburban Smash and God Fodder. Although they've been around for about two years, the young band began seriously writing songs about a year ago, said guitarist Jake Jones after their 18-minute set finished.

We can hopefully expect bigger things from the group in 2009, if the final song of its set (the working title is "Escape") was any indication; these newer songs promise to take the four-piece beyond intentionally basic pop-punk. (Just last July, they were covering Blink 182's "Josie.") For comparison, think of the the first Latterman record and yes, the first two Blink 182 records, Cheshire Cat and Dude Ranch. "That's what got me into pop punk," Jones said plainly, after the band's set. Jones also took time to promote his hip-hop group (seriously), King Kong Magnetics* 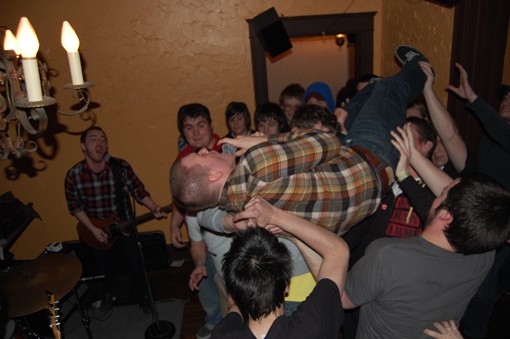 Up next on the bill were the Humanoids, who barreled through its regular set in just 20 minutes, but began with a new song, "Future Perfect." The band ended with "Minor Wound," off its debut CD/LP, Are Born and filled out the middle of its set with songs from Year of the Snake, its recently released EP of the same name.The band is finishing writing a second LP, but details on who's going to put it out or when it'll be out are up in the air. No Idea Records could be a good fit for this group, but that's just me thinking aloud.

New Jersey's Psyched to Die played for another 20 minutes, doing its thing and getting an honest crowd response, with more than a few front-row sing-alongs. The Screeching Weasel comparisons were apt for them and fans seemed into it.

Headlining was Baltimore's Deep Sleep. The members of this band had been through St. Louis a number of times in bands like the Spark (which played at the Lemp Neighborhood Arts Center), Pulling Teeth (Apop Records) and Never Enough (again at the Lemp). They've been honing a more poppy, Descendents-like sound over the past few years as a group, after serving time in the aforementioned fast-core bands just a few years ago. The band has released three EP's thus far, (which were released on a single CD this month called Three Things At Once.)

The show was over by about 11:30 p.m., which because of the 20-minute sets, made sure this show did not get over at "punk time." With nothing broken, the bartender busy all night and plenty of people in a place that might have only a dozen or so patrons otherwise, the show appeared a success. Til next time.

*I incorrectly put "Mechanics" on the original version of this post!