Album: I Reserve the Right!

What it sounds like: A real band that's not as good as a made-up one/Southern butt-rock/ Lynyrd Skynyrd-meets-Foghat.

Best Track: "Fair Warning." This song is exactly what bands like the Drive-By Truckers are going for these days. It's a brand of rock that reeks of swamp gas and stale beer. Stillwater even uses three guitarists, just like the Truckers.

This song features a bluesy piano and a snappy bassline to go with its noodling guitar solos. The lyrics tell a story about a girl named Foxy Lucy who likes to cheat on her boyfriend, Jo Bob Jenkins (See what I mean about the Lynyrd Skynyrd?). The "Fair Warning" is that while Foxy Lucy's "short shorts and halter tops" are enticing, it's best to stay away because Jo Bob "totes a switchblade knife."

It ends with this clever little twist: "Jo Bob will catch you by surprise/and cut you down to size/he's fool enough to do it/I know it for a fact/there ain't no maybe to it/I've got the scars to prove it."

Worst Track: "I Reserve the Right." Equal parts Foreigner and Van Halen, this is something the boys in Detroit Rock City would get down to. It has an endless, soaring guitar solo and cheesy rebellious lyrics like this: "Last night I got loose as a goose/got high/got tacky/drank all they had, broke all the rules/blew by cool/acted wacky."

The chorus is about reserving the right to do stupid shit, and goes so far as to proclaim: "I reserve the right/To be unintelligent." Seriously, the band should know being unintelligent is a privilege, not a right. 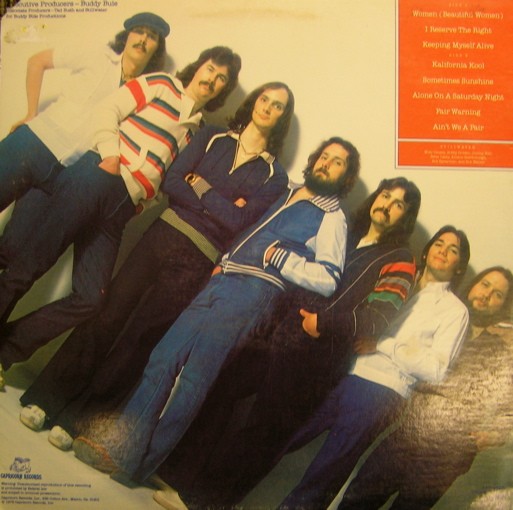 The Facts: Stillwater is best known as the fictional band in Cameron Crowe's stellar 2000 film Almost Famous. Fronted by the incomparable Jason Lee and featuring Billy Crudup as lead guitarist Russell Hammond, Crowe based the group on several bands he covered as a Rolling Stone writer in the '70s, including Led Zeppelin, the Alllman Brothers and The Eagles.

The music the band plays in the film, including their hit song "Fever Dog," was co-written by Peter Frampton, Crowe himself, and Crowe's wife Nancy Wilson of the band Heart. Pearl Jam's Mike McCready played guitar on the songs. Check the IMDB trivia page for all of the obscure references to '70s musicians that permeate the film.

The made-up band's Wikipedia page is pretty stellar, featuring tongue-in-cheek bios for each band member and a full history that outlines their entire career, including their Almost Famous and No More Airplanes tours.

The real band Stillwater formed in Warner Robbins, Georgia in 1973. They only released two albums, a self-titled in 1977 and I Reserve the Right in 1978. They broke up when their record label, Capricorn, went out of business.

Their biggest hit was a song called "Mind Bender" from their first album, and their only real claim to fame was opening for the Charlie Daniels Band when they were touring in support of "Devil Went Down to Georgia." They reunited in 1997.

Crowe had to obtain permission from the real band to use their name in his film. They agreed after reading the script, probably so they could be, well, almost famous again.

[Ed. note: Stillwater was also the name of a St. Louis band back in the day; it featured Magnolia Summer's Chris Grabau, among others.]

Info from Wikipedia and All Music.