February 04, 2009 at 11:00 AM
comment
I braved insane paint fumes, the cold and impending vacation and trekked to the new Firebird to snap some photos of its new! and! improved! appearance! Proprietor Mike Cracchiolo and pals were still busy at work painting the place and gussying up the bar, but the venue should be all spiffed-up by the time Thursday's show with Gil Mantera's Party Dream, Jason and the Beast, Thor Axe and Superfun Yeah Yeah Rocketship. The rest of the opening weekend promises to be loads of fun -- Friday's shindig features the Feed (playing lots of new material, the band tells me), Fattback, the Hibernauts and Wormwood Scrubs (playing its LAST show), while Saturday sees Target Market, Say Panther, Hunter Gatherer and the Mhurs performing. Tell me how it all was, ok?

Without further ado -- photos! All taken by me, save for the logo one below, which Jimmy Vavak kindly snapped. This sign is on the outside of the building, on Olive.

The view from the back door of the club. To the left used to be the bar -- but as you can see, not anymore. The venue seems a lot bigger.

The bar, which is now in the part of the venue closest to Olive, where the pool table and merch tables used to be. In progress.

The ceiling above the stage. It's been raised, and there will be spotlights on the stage , a la Cicero's. The Firebird bought 2 Cents Plain's lighting, in fact.

A view of the stage from straight on.

Another view, from the back door.

A flourish in the women's bathroom.

More detail. A handle in the ladies' room.

Some things remain the same from the Bluebird. 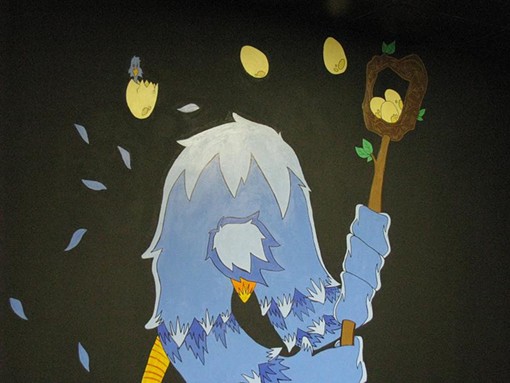 Other things don't. The remnants of the back door's sign. SAVAGES.

Maybe he had something to do with that. Hmm.