What it sounds like: Aretha Franklin slurring her words like Mick Jagger over "street" renditions of the classic Stones song. 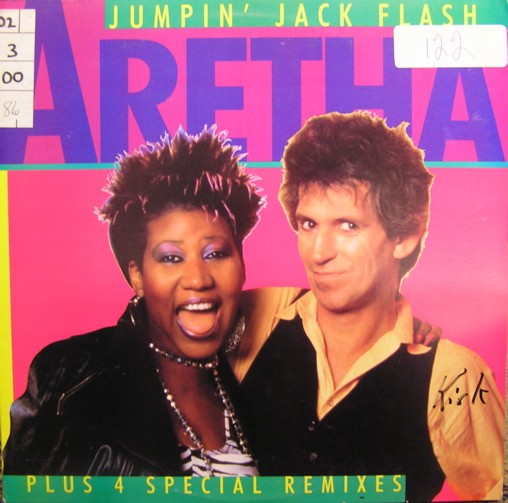 Best Track: "Jumpin' Jack Flash (Album Mix)." Unlike the Stones version, which launches right into the iconic guitar riff, this one starts out slow, with a bass solo, a keyboard note held for a couple measures, and then Richards' guitar. Aretha joins in belting out opening line, "Anythang-ang-ang-ang...I was born in a crossfire hurricane/and I how-ow-ow-ow-owled at my ma in the driving rain."

All in all it's a little slower than the Stones original, and there's much more emphasis on the rhythm section. Since it was recorded in 1986, that means a heap of drum machines and excessive keyboards.

Aretha tries to stretch out every syllable to hit the high notes. The last bit of the song is all "Yeah" "oh" "aww" "ooh" and even a "hallelujah," all bawled out perfectly in key. The lady does have some pipes.

On the "Street Mix (Radio Edit)", I had to check to make sure I didn't accidentally switch the record player to 45 rpms. Remember Phil Spector's "Wall of Sound?" This was like the wall of percussion--drum machines, 808's, an incessant hi-hat--it sounded like those buskers who pound on plastic buckets.

Meanwhile, Aretha is trying so hard to catch up she sounds like she's slurring her words like Mick Jagger at Altamont. Toward the end she just starts wailing and moaning all over everything.

Who you can thank for the amazing cover art: Art Direction: Maude Gilman. Photography: Ross Marino 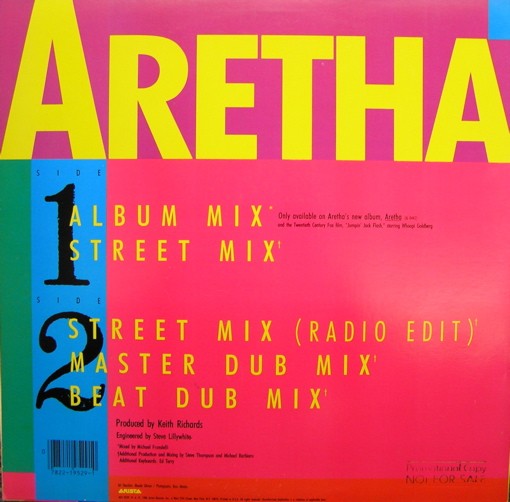 The Facts: This single served as the theme for the 1986 Whoopi Goldberg film also titled Jumpin Jack Flash, a movie that's notable because it featured the Internet as a main plot device. (Other than that, it ranks somewhere between Sister Act and Eddie in terms of quality  in the Whoopi pantheon.)

The song comes from Franklin's 1986 album Aretha (with Andy Warhol's final piece on the cover, that album has much better art.) It's produced by Keith Richards. Aretha the album was the The Queen of Soul's return to glory. The George Michael duet "I Knew You Were Waiting (For Me)" was Franklin's first number one single in nearly 20 years. It was the third album Aretha titled Aretha, the others coming in 1961 and 1980.

More on Aretha: She is Whitney Houston's godmother, won 21 Grammy awards, had 20 number one singles, was the first woman inducted into the Rock and Roll Hall of Fame, and sang at the inaugurations of both Bill Clinton and Barack Obama. At the latter ceremony, she wore the best hat ever.

Info from: The Official Aretha Franklin site, Wikipedia, and All Music