January 20, 2009 at 9:00 AM
comment
If James Intveld wasn't such a nice guy, you'd want to kill him. The L.A.-born rockabilly and country singer acts, directs, writes, produces and can play any instrument you throw at him. Last year's Have Faith, his third solo album, offers a graceful ode to the Nashville Sound without losing his honky-tonk edge, which he honed in the same L.A. clubs that hosted X, Los Lobos, the Blasters and Dwight Yoakam in the '80s. Check out my preview in last week's RFT and check out Intveld with a full band at Off Broadway tonight, a swinging way to cap off the inauguration festivities. Here's my extended interview with the rockabilly great. 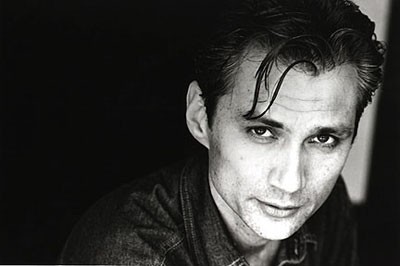 How old were you when you started playing the Palomino in L.A.?
The Palomino wasn't the first place I played. I put a band together when I was ten, called Freedom. I started it when I lived in Compton, with some friends from Catholic school. We were doing the guitar mass and the glee club, so we decided to form the band. Then I moved out to Orange County, and went to high school at Garden Grove. I used to go to the Palomino when I was a teenager. I was seventeen when I did my first talent night there. There was this whole underground scene happening in Los Angeles, a punk rock, rockabilly, country, new wave scene. That's where it all came together.

What were the talent nights like?
You'd sign up, sing, and if you won, you'd get $100. But I was only going down there to get a chance to sing. I'd ask them to get me on the list early so I could get home and get up for school. That was where I found out about all these other venues having country gigs. So I put a little band together and we started playing in Hollywood, at Club 88 and Café de Grand. We just became part of that whole scene with the Blasters and X and became friends with all those guys.

Were you doing country or rockabilly?
I was initially doing a straight country thing, but then in the Los Angeles clubs with the Blasters and Ray Campi, and Robert Gordon coming to town, we made things more rockabilly. And then the Stray Cats came along and the whole thing blew up. The different thing about my band is we were doing weddings on the weekend and making money. My band and Los Lobos were the two bands going out and playing weddings and dances. Now after all these years, I think I'm more of a country artist than anything, especially since the whole style has opened up.

Did you ever record with that early band, the Rockin' Shadows?
We were on this 1982 Rhino album, L.A. Rockabilly, which Los Lobos and Billy Zoom were on. And we put out a single, which mostly sold overseas.

Your first solo record wasn't until 1995.
I'd played twelve or thirteen years before I put out an album. What happened was I was getting all these people asking me to put out a record for their label, and the people I was working with told me to wait for a better deal. So we kept waiting and waiting. And then I lost my brother in the plane crash with Rick Nelson, so things had changed for me as well. I was in a little bit of a haze with my career. I got into acting school, studying Meisner technique, method acting. I wasn't fully focused on one thing. I was playing guitar for the Blasters, bass for Dwight [Yoakam]. Eventually Ray Campi asked me to record a song for a Bear Family anniversary album, and the owner of the label liked it so much he gave me some money to do a whole record.

What was your first acting gig? Was that Roadhouse 66?
Yes it was.

I confess I haven't seen it.
Well if you're up at three in the morning, it might come on. That's true for a lot of movies I've been in. The part for that movie was written for Charlie Sexton, but he had a bunch of stuff going on, so the guy making the movie came to the Palomino and saw me, and came up after the show and said, "You wanna be in a movie?" That's sort of how it went. I did the movie, had a few lines, and decided to go to acting school and start a whole other career.

You directed Miracle at Sage Creek, with David Carradine in the lead role. Is that your most recent film project?
I was supposed to do another movie with David. We're trying to do a movie on a Louis L'Amour book, Ride the River, and David wants to do it with all his brothers. We haven't been able to get anywhere with it. The budget is $20 million, and it's hard to get anyone to give me that kind of money to direct a movie. I did do a short film for the Silver Lake Film Festival last year. It's called West of Eden, which is about a letter James Dean wrote to his girlfriend when he came out to California to make East of Eden. And then I did a music video for Dale Watson. But it was time to make another album, and so I put all the other stuff on hold. Right now I'm just focusing on music. If Scorcese calls, I might have to cancel the tour.

You moved to Nashville a few years ago.
Yeah, I found that for me personally, the scene in L.A. was sort of getting quiet, as far as music is concerned. I felt like Nashville had a lot more going on.

You can hear a kind of Nashville sound on the new record, with Lloyd Green on the pedal steel and the Jordanaires and the piano.
I wanted to take advantage of that. I get the opportunity to go out and see all these legendary musicians. Last year, I got to sing with Don Helms, the original steel player for Hank Williams. That would have never happened if I had stayed in Los Angeles.

I love the Ricky Nelson song, "Something You Can't Buy," on the new album. It's not one I'd heard before.
He recorded it on Intakes, which wasn't a very big album. I know about it because my brother played with Nelson. I like to do covers on my albums. Nelson is famous for doing songs he didn't write; "Garden Party" is an exception. I thought this was a good song that needed a good treatment.

Are there any instruments you can't play? No, wait, I should ask: Is there anything you can't do?
I can't do a lot of things. I guess I can do a lot of things OK. No matter what I work on, music, movies, or playing with other people, it's because I get excited about the artistic side of it. When I was a kid I used to paint. People ask if I'd rather be an actor or a musician. I don't really have an answer. Whatever moves me and is in front of me at the time, I'll work on that. That's my story.