January 14, 2009 at 3:12 AM
comment
It's a given that AC/DC's Scottrade Center show was great. But just how great was the concert? Well, consider this: The legendary Australian band played for 100-plus minutes - including a two-song encore - and barely stopped to take a breath. Keep in mind the band has been together for over 35 years, and vocalist Brian Johnson is 61 years old.

AC/DC arguably perfected hard rock, but such a generic term seems almost insulting to use -- especially because the band so earnestly honors and assimilates the deep boogie of the blues. (New tune "Big Jack," in fact, recalled the Stones' "Honky Tonk Woman.") But the band's songs feel preserved in amber, as sleazy and full of vigor as the day they were recorded.

Perhaps that's why the entire show felt ageless -- and since the set list gave the illusion that AC/DC has recorded nothing since 1990 (save for the five new songs played from last year's Black Ice), that perception remained at the forefront. Of course, Ice's songs received a lukewarm reaction -- although unlike many heritage acts, a lag in crowd energy stemmed from unfamiliarity, not lack of quality.

Still, an apathetic atmosphere permeated the nearly sold-out arena at first, which was curious and perplexing. AC/DC came out blazing with a raunchy animated video full of obvious references to various sexual acts, before a hailstorm of fireworks signaled the arrival of a stage prop of a giant train. Cue Ice's lead single, the fantastic "Rock 'n' Roll Train" and Let There Be Rock's "Hell Ain't a Bad Place to Be." People started nodding a bit more vigorously during "Back in Black" but it took a one-two punch of a lecherous, leering "Dirty Deeds Done Dirt Cheap" and chest-pounding "Thunderstruck" to rile people.

From that point on - save for new tunes "War Machine" and "Anything Goes," which killed the momentum - the beer-bolstered audience was into the show, whether pumping their fists to the "oi! oi! oi!" chant in "T.N.T." or freaking out to strip-club anthem/classic single "You Shook Me All Night Long." Other highlights included a lumbering "Hells Bells" and "Shoot to Thrill" (both from Back in Black). The former featured the band's trademark oversized bell falling from the ceiling; impressively, Johnson took a running leap, grabbed on to the bell's string with one arm and swung around for a bit. 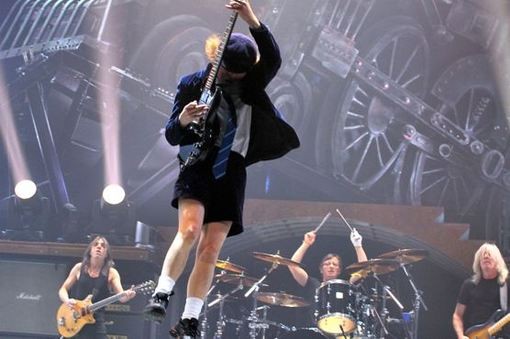 The fit (but solid) vocalist stalked the stage and a catwalk that jutted into the crowd, pausing to give high-fives to super-excited fans and warbling with his garbled yowl. Guitarist Malcolm Young was looking every inch like a 56-year-old, but the energy of little brother Angus - who sure as shit wore his trademark schoolboy outfit and sturdy black shoes with white socks - never wavered.

He duck-walked, strutted like a peacock, skipped like a jump-roper and shuffled stiff-limbed, all the while happily tapping out iconic riffs. Young had fun with the band's devilish motifs, too. The encore started with a cauldron-caliber cloud of smoke wafting from the stage floor, backlit by deep red lights - from which he finally ascended, sporting devil horns on his head and a wicked grin. Cue "Highway to Hell," which was as raucous and bawdy as one would hope.

That summed up the show itself - to a certain extent. For as sexually charged as its music is, AC/DC itself treats sex in quite a cartoonish way. During "Whole Lotta Rosie," a gigantic blow-up doll appeared onstage - one with absurdly gigantic boobs. (Like, if this was a normal-sized woman, she would have basketball-sized breast implants.)

And during "The Jack" Angus Young did what amounted to a striptease. First he removed his velvet jacket and rubbed it back and forth between his crotch. Then he removed his tie and rubbed it on his ass. Then - as a drum solo built anticipation - he turned his back to the crowd, unbuttoned his shirt and then spun around and ripped it open like a superhero, to the delight of fans. Finally, he mooned the crowing audience - revealing boxer shorts with "AC/DC" written across the butt.

Titillating, it wasn't. (Nor was it meant to be -- don't worry, I get it.) If anything, these antics just underscored his playful, theatrical nature. Exhibit B: During "Let There Be Rock" Young entered Shredsville -- population: one -- and put on a clinic. Playing with one hand? Check. Stepping onto a platform, which then rose above the crowd very high - while still playing? Check. Proceeding to play guitar on your back, while wriggling around in a circle? Check. Playing guitar on your back, entire body shaking as if you're having a seizure? Check again.

These ridiculous displays of skill oddly made me think of two questions during the show: What is going to happen when AC/DC isn't touring anymore? Who's going to take its place? Nobody will, of course -- nobody can -- but to have a band that's so consistent and unwavering in its creative comfort zone is comforting. AC/DC fans don't want the group to, say, decide to do an electro album -- and thankfully, the band doesn't want to do that stuff either. It's content to just bring no-frills, balls-out rock to the people. And we're lucky to have them.

Critic's Notebook: The other coolest aspect of the stage? The middle was lined with clear Plexiglas panels with cameras underneath directed upward - so when Angus strutted, there was a feet-level view of his moves.

Also: The number of elementary-school kids I saw at the show - boys and girls -- was heartening. And heartwarming, even if I'm sure some of them learned some facts of life a wee bit early last night.

Fan of the night: Despite the sub-zero chill, I saw a guy dressed exactly like Angus -- from the orthopedic-like black shoes and thick white socks, to the short-pants, navy-blue schoolboy uniform (photo here). That man gets my undying respect.

Encore:
"Highway To Hell"
"For Those About To Rock (We Salute You)"