What it sounds like: The missing link between Big Daddy Kane and Boyz II Men--not quite hip-hop, not quite R&B, not quite jazz, quite horrendous.

Best Track: "Temporary Love Thing." From an album that oozes sexuality like an open genital sore, this ode to booty calls is in a league of its own. It's like they took the worst parts of every musical genre of the 1980's, put 'em in a blender and hit frappe. It's got some kitschy DJ scratching and rhyming, a cheesy 808 beat, some smooth jazz saxophone riffs, and a herky-jerky, B-52's-style rock rhythm.

And then there's the lyrics: "There ain't nothing wrong with a temporary love thang/in one night I can love you forever." There are even background vocals that fall back on the ol' "So on and so on and shooby dooby dooby." My fav line though is: "As sure as my name is bowlegged Lou/I'll love you through and through/cause I'm fresh and new/like a virgin."

Worst Track: "Body Heavenly" The album's slow jam starts with a tinkling bluesy piano melody, a tambourine beating out the time, and the fantastic line, "If I taste your sunshine/would it burn my soul?"

Who you can thank for the amazing cover art: Sadly, there's no art credit. If you can't read on the back, the little speech bubble says, "Don't even try it...WORD!" It's like the original LOL Cat. 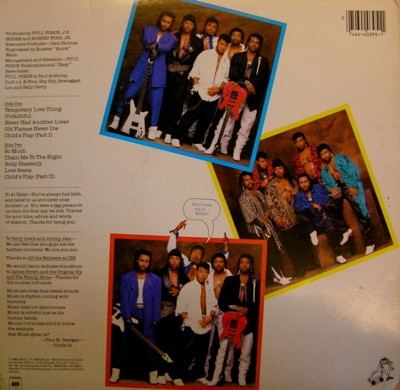 In 1985 they released their self-titled debut album and produced the U.T.F.O song "Roxanne Roxanne," and later songs for Lisa Lisa and Kurtis Blow.

Get Busy 1 Time! was their second release and featured the single, "Temporary Love Thing." The back of the album says it is dedicated to "James Brown and The Original Sly and the Family Stone" and also features a shout out to Terry Lewis and Jimmy Jam.

They went on to release six more full length albums, including Guess Whose Comin' To the Crib? in 1987 and most recently, Legendary which came out in 2007.

They're most notable, however, for their production work from the '90s to the present. They produced the Rihanna song, "That La La La," and co-wrote the Black Eyed Peas' "Don't Phunk With My Heart." They also produced the Backstreet Boys song "All I Have to Give," and, believe it or not, sang back up vocals on Bob Dylan's "Death is Not the End" from his 1988 album Infidels.

By far my favorite factoid about the group, however, is that they had roles in the Kid and Play classics House Party and House Party 2. They play the thugs at Kid and Play's High school, with Bowlegged Lou playing the lead henchman Pee Wee.

Here are the boys in House Party 2:

And here is the best scene from House Party: