Show Review: Superfun Yeah Yeah Rocketship, The Blind Eyes, The Hibernauts and The Makeshift Gentlemen at Off Broadway, Friday, January 9

January 11, 2009 at 9:04 PM
comment
I headed down to Off Broadway on Friday night to join folks primed and ready for a true potpourri of local music: One-man spazz show Superfun Yeah Yeah Rocketship, retro-pop power trio Blind Eyes, the bartender-meets-Brit-prep of the Hibernauts and the shiny, neon synth-punk theatrics of the Makeshift Gentlemen. The turnout was impressive, considering the cross-town competition of Pomegranates, Ocean Rivals and the Mhurs at the Bluebird. (How'd it go?) 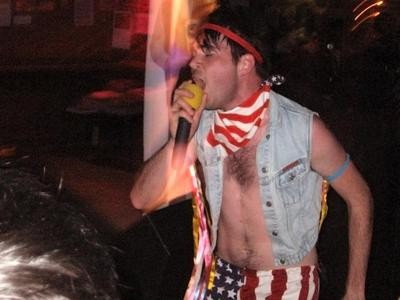 Superfun Yeah Yeah Rocketship's set had already started by the time I arrived, and an excited perimeter of friends and fans already encircled the dance floor in front of the stage. SYYR's Corey Goodman never fails to entertain. Life-size cutouts of Stephen Colbert and pro-wrestler Triple-X flanked him onstage, and he paused between songs to take a swig of "rocket fuel" from a small gas can. His banter and exchanges with audience members were almost as entertaining as his hyper-quirky songs and playfully invasive venue-roaming. (NOTE: There is no such thing as "personal space" at a SYYR show. Prepare to be smelled, rubbed and sweated on.)

The front row of the audience turned over as the onstage setup followed suit. The Blind Eyes plugged in, switched on and jumped into a set of throwback guitar tone and rolling bass lines with stair-step turns -- the kind of American Bandstand melodies that seemed to want so badly to be accompanied by some "That Thing You Do" handclaps. In fact, if there was ever a band in town that had a reason to wear matching suits, it's Blind Eyes. (Sorry Jon Hardy & The Public, but you guys look good, too.)

All retro ends there, however, with the band's vocals serving as how the trio carves out its unique identity. While bassist Kevin Schneider's vocals still have the sassy punch of attitude that recalls the UK of the 80's -- and the band borrows a bit of the mod/garage leanings of its former incarnation, the Gentleman Callers -- guitarist Seth Porter's vocals are the true difference-maker. Projecting the occasional soulful grit that brings to mind Catfish Haven's George Hunter, but never losing melodic nimbleness, Porter's voice stands out. With some charismatic facial expressions bearing a resemblance to the always-charming Glen Hansard (of The Frames/Swell Season/Once fame), he delivered the evening's most earnest lyric: "Thanks to all of you who stuck around. Thanks to everyone who held the fort down."

The Hibernauts opened its set with a batch of new songs -- including the punchy start-stop drumbreak strut and bookish come-ons of "Intramurals" -- but familiarity soon flooded into the room, as the first few rows of the crowd sang along with guitarist Jack Stevens on the first verse of 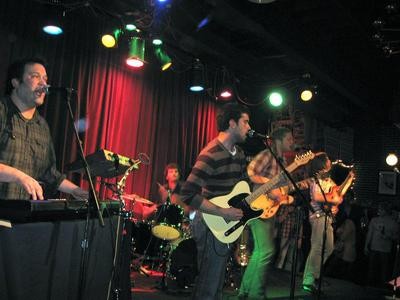 After a couple more new songs ("Wake Up, Stay Up", with its Who-esque intro, and the dueling guitar arpeggios of "Brakelights") the band launched into "Throwing Rice," which resulted in so much dancing that Stevens had to cool everyone down with a good ol' fashioned beer shake 'n spray. The set drew to a close with "Walking Spanish," which opens with soft keys and solo vocals but gives way to a dark and lurching verse. Though the Hibernauts have its share of cheeky lyrics, don't be fooled into thinking the band is incapable of sincerity or sentiment. Stevens stubbornly pleads, "I don't want to talk about it. I don't want to talk about that day," but admits his own callousness: "I think it's all ice in my veins." 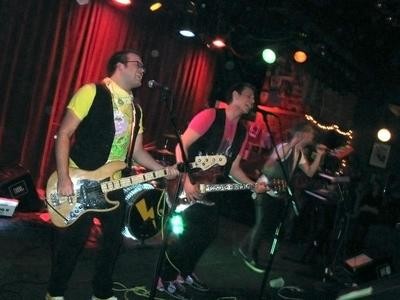 The Makeshift Gentlemen are apparently headed off to the geriatric beaches of Florida - or as they clarified on a number of occasions, "We're moving to Disney World." [Ed. note: No, really, 3/4 of the band is -- college internships, you see.] Subsequently, this show served as the band's farewell to St. Louis -- and you couldn't help but get the impression that they were moving on to bigger and better things. Fitting, I suppose, because as the young band (clad in their matching black suit-vests and coordinated shirt-shoe combos) began their set of goth-pop nü-wave rock (rearrange those terms as you see fit), it became increasingly apparent that the band desperately wants to be bigger than the venue - bigger than the city.

With their multicolor LED panel lights pumping out seizure-bait from either side of the stage, and the moving rope lights wrapped around the drumset, the Makeshift Gentlemen are determined to put on a show. It's the kind of small-scale production that I imagine could have been found at early Panic At The Disco shows (and indeed, with a little seasoning, the band would most certainly thrive in an PATD opening slot at the Pageant). It's perfected the theatrical over-expressions and vocal affectations that sell out stadiums, and seem to be primed and ready to follow in Ludo's footsteps - out of the corner bar and into the coliseum.

The band's aspirations are not devoid of innovation, though, as they do bring a uniqueness to the fold. Lead singer Joe Swigunski's voice carries a softly operatic tone, which adds to the occasionally Vaudevillian sound of the band. Arpeggiated synths and drum machines borrowed from the Faint's back-catalog, along with a trickle-down of Interpol's dourness, further contribute to the macabre edge of the band's otherwise hormone-fueled panache.

It's no secret that this brand of post-Fall Out Boy rock appeals decisively to a certain age-group -- and every time I leaned in closer to try and "connect" with it all, I nearly plummeted into the bottomless ten-year gap between 16 and 26 that leaves me feeling older and older every year.

But the good news for these Gentlemen is that they are making music that's exactly what kids want to hear, judging by the crowd dancing up front, eating up every "Lemme hear ya, St. Louis," "Come on! Come on! Yeah!" "Dance, St. Louis!" and reaching out in the hopes of getting a gratuitous handshake from a band member.

So, are the Makeshift Gentlemen ready for Florida?Well, if Florida is full of arenas with thousands of kids waiting to watch a Panic At The Disco concert, then I would say yes, they are ready.

-- Words and photos by Steve Kozel