What it sounds like: The post-Weezer feeding frenzy, when major labels signed any band with tendencies toward grungy power-pop and heartfelt melodies. Also, the type of rock found in the Chicago/Champaign area in the 1990s. 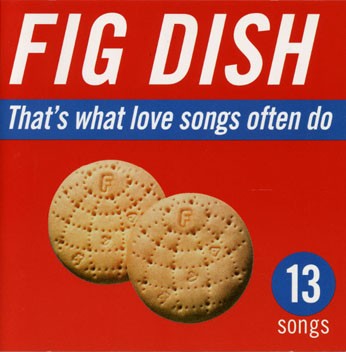 Best Track: Tie between "Bury Me" and "Nimble." The first is a sub-three-minute nerd-rock waltz with interesting arrangements (i.e., a bridge that slows down dramatically, before speeding up again in a drumming fury) and the plaintive (and effective) call, "Wanna be with you!" The second song is an atmospheric bit of space-rock that starts chugging toward guitar-hero heaven halfway through -- and pretty much runs parallel with anything on Hum's You'd Prefer an Astronaut.

Worst Track: "Weak and Mean." Mainly because its Weezer-isms are rather pronounced and have aged badly, and the song plods and churns forward. Actually, it sounds a bit like the band Lit.

Who you can thank for the amazing cover art: Not specified, but overall design by J. Shapiro/Right Arm!

Fig Dish was part of the Chicago rock scene in the '90s, which earned notoriety because of Smashing Pumpkins, Liz Phair, Urge Overkill and countless other forgotten (but fantastic) acts. The quartet released two albums on a major label, That's What Love Songs Often Do and When Shove Comes to Push. Neither sold very well, but the band did tour with fellow Chicagoans Veruca Salt, as well as Letters to Cleo and the Rentals.

The band was dropped by A&M in 1998. Fig Dish did a reunion show in 2006, and you can also download the band's never-released third album, Onanism, over at Atomic Ned.

Two of its members -- singer/guitarist Blake Smith and Mike Willison -- went on to form the theatrical (and underrated) rock act Caviar. These two, along with Local H's Scott Lucas, are in the electro band The Prairie Cartel.