Last night at the Pageant, you showed up again this year as the man of honor at A Very Ludo Christmas. But things were somewhat different for the local quintet as it celebrated its fourth annual holiday extravaganza. For starters, earlier in the year Ludo released You're Awful, I Love You, its major-label debut. That CD spawned a modern-rock hit ("Love Me Dead") and helped raise the band's national profile: Warped Tour, gigs with Relient K and the Presidents of the United States of America, appearances on late-night television and countless other promotions convinced those outside St. Louis of Ludo's talent. 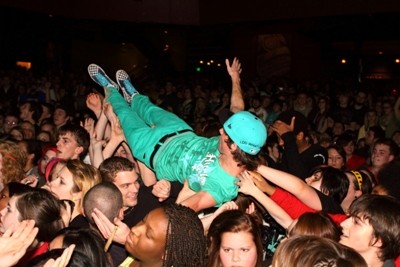 What was apparent after the show last night - where you had the best vantage point, in a throne situated stage left - is that the band has earned this recognition because of its songs. Awful

tunes "Such As It Ends" and "Please" are stone-cold pop gems, with seamless construction, catchy hooks and original arrangements. Ludo's ability to skid between genres (always one of its big strengths) also impressed me last night, even moreso than it has in the past.

Ska, power-pop, metal, rock, punk and everything in between -- drummer Matt Palermo kept up with them all, which is no easy feat. Guitarist Tim Ferrell coaxed rock-god solos and virtuoso tones on the stage near you, Santa, while scarecrow-like Moog player Tim Convy whirled around the stage like a kid dancing in his bedroom to his favorite tune. (He didn't need to pump up the crowd much, though; it sang along loudly, especially on "Love Me Dead.") Fill-in bassist Tommy (from Tommy & the High Pilots) also did an admirable job.

Loyal old-school Ludo fans also must have been good this year, because the band played them old favorites "Hum Along," "Good Will Hunting By Myself," "Girls on Trampolines," "Broken Bride: Part I" and "Save Our City." The difference between this older material and newer songs was like night and day; the maturity level and complexity of Awful tunes was head and shoulders above the rest.

Now Santa, if it's one thing I want you to give the band, it's this: Vocalist Andrew Volpe needs to ease up on using his nasally vocal range. Unlike other modern bands, he doesn't need to affect that style to compensate for any shortcomings. As demonstrated by a moving solo version of "The Horror Of Our Love" - which reminded me of Billy Bragg, style-wise, believe it or not -- Volpe has a solid, vibrato-rich voice. When he slipped into the nyeah-nyeah range (on about half of the new songs and most older material), it distracted from the music more than I remember from past shows.

Still, his theatrical facial expressions and rubbery-limbed contortions charmed. (And I hope you didn't mind when he lovingly called you a "sonofabitch.") The festive show satisfied fans and the band. And okay, it was heart-warming, sappy and just a little cloying when Ludo brought up costume-wearing folks - including a reindeer, felt Christmas tree, Mrs. Claus, etc. - to dance onstage and sing Christmas carols near the end of the show. This gesture fit the festive mood set by the stage full of inflatables (cherries, snowmen), Christmas lights, a tree, stockings and other gaudy trappings.

Oh, and Santa - thanks for those gifts this year. I must have been really good in 2008 too!