December 16, 2008 at 3:04 PM
comment
"This is a stark contrast to playing before the Black Crowes," Andy Cabic, principle Vetiver said from the dimly lit Off Broadway stage. "I keep expecting you to throw things." The night was incident free--unless you count one song-wrecking squawk of guitar cord buzz before "Sister," one of a handful of new songs played last night. 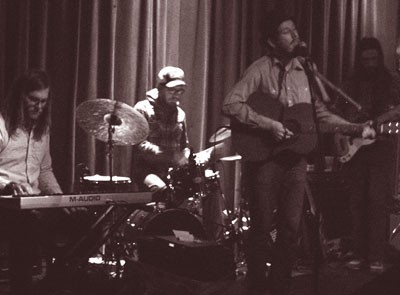 For the last few weeks, the San Francisco collective has been chasing the Crowes' tour buses across the Midwest. A&R at Sub Pop, Vetiver's new home, probably got a chuckle at that.

"We wanted to get here early to go to that 100-year-old hat shop," Cabic said from beneath a black pork pie. "What's it called? Levine's?" He seemed relieved to be in a small room, a space where he could connect with the 60 or so twentysomethings, wrapped in scarves and knit caps, who had braved the first truly ass-cold night of the winter. This was a listening crowd, fans who had never seen the band before (this being Vetiver's first St. Louis appearance). At times one wondered if the kids were having any fun, or even drinking. They appreciated every song with stoic and thoughtful applause. Say what you like about the children of Devendra Banhart: They know how to pay attention.

Cabic is a self-made man of his influences, which is to say he chooses his models--in his voice, Loudon Wainwright III; in his melodies, Paul Simon; in his arrangements, Jackson Browne's first album--deliberately and convincingly, stealing not imitating, with a cunning that makes it seem he's not stealing at all. With lap steel, keys, electric and acoustic guitars, electric bass and light, jazz drumming, Vetiver sounded less like neo-folkies and more like neo-rockers working out songs they'd never played before but which they'd always wanted to play--so they listened close to each other and rose and fell as a group.

The set opened with "Oh Papa" from their self-titled album, with Cabic getting the feel of the quiet room, bending at the knees to lean into the choruses, and peppering the little breaks between verses with queer, pretty leads on his Martin guitar. "Rolling Sea," a new song followed, with lyrics pillaged from forgotten folk sources and a yearning, trance-like mood. Trance is a word that often gets used when describing Cabic's approach to melody and tone. But the band is never sleepy, lazy or listless. They can play quiet enough that you can hear the stage creaking beneath them; they can also swell and stun with dynamics, though they expect their audience to listen as closely as they do to hear it.

Of the new songs from Tight Knit (due out February 17 on Sub Pop), "Another Reason to Go" was the most graceful, with lines like, "If you need reminding, I'll count all the reasons to be true," and the lap steel sounding plush and full. Cabic kept mostly to older material all night, playing only one song from this year's covers set Thing of the Past: "Blue Driver," a song written by Michael Hurley of the Holy Modal Rounders, another source to be plundered and remade, and a wide-open doorway to stomping the rhythms hard and true. The night ended with "Idle Ties" and "Won't Be Me," a disarming fusion of fragility and strength, of longing and letting-go that is Cabic's mysterious, original signature.