Show Review + Photos: Sharon Jones and the Dap-Kings and the Menahan Street Band at the Pageant, Friday, December 5

(Photos and words by Annie Zaleski. Do not use photos without permission. Entire Flickr set here.)

It's Sharon Jones' world, and we just live in it.

That was certainly obvious last night at the Pageant, when the 52-year-old dynamo strutted, sassed and sang for an adoring crowd full of dancing fools and soul revivers. For 90 minutes, she and the Dap-Kings - her crack band full of horn players, percussionists and the usual bass/guitar combo - played highlights from their 100 Days, 100 Nights and Naturally albums, debuted a slow, soulful new song and performed a few covers with a bizarro-world James Brown named Charles Bradley.

But at a show like this, what's played is less important than the mood the music conveys. And the sizzling soul-funk-R&B-Motown hybrids were jubilant, celebratory and downright euphoric. The diverse crowd - which ranged in age from twentysomethings to baby boomers, of all ethnicities, some sporting fancy suits and dresses - followed every beat and rhythm; wildly flailing dancers packed the entire floor of the Pageant and even some in the seated areas shook their tailfeathers. In fact, it was almost impossible not to sway and move to the music and marvel at Jones' powerful voice.

And oh, that voice, which filled the Pageant with its power and history - informed by her time as a corrections officer, her struggles as a session singer and even now, when she's a universally revered entertainer and talent. She sported a classy but fun silvery-black dress covered with fringe and high silver heels (which she kicked off a couple of times) and commandeered the stage like a gospel preacher. (Albeit a preacher who breaks out the mashed potato, the funky chicken and various other body-contorting dance moves, all of which showed off rather impressive athleticism.) The Dap-Kings are equally dominating, just a sick crew of musicians -- one that impressively stopped on a dime with a quick snap of the arm from Jones, the type of group that's so tight they can follow any unexpected deviation and barely break a sweat.

Still, it was an odd experience seeing Jones and the Dap-Kings in a larger venue, especially since the act's packed Blueberry Hill show in January was such a transcendent, intimate experience. But the group skillfully incorporated plenty of audience participation moments into the set, which made the show feel smaller (even though "100 Days, 100 Nights" whipped the crowd into a frenzy based solely on its opening cascading horn lines). 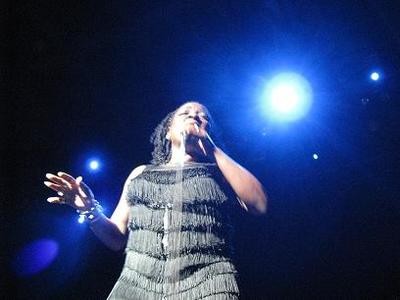 Jones encouraged the crowd to sing the backing "whoo-ooh" swells on "Nobody's Baby" and recited her history atop the crisp horn accents and brisk tempo of "My Man is a Mean Man" while running around the stage. For "How Do I Let a Good Man Down?" she called up a diverse bunch of ladies onstage to dance along with her (and she meant business; she specifically called out for an Asian girl to come onstage with the rest of the United Colors of Benetton-like crew). 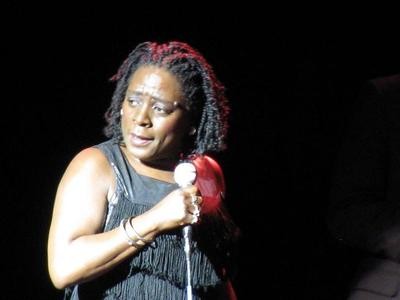 After the song ended, she sent them offstage one by one, as the Dap-Kings played behind her - with orders to strut their stuff, in whatever unique, flamboyant way they wanted to. Seeing as I'm a woman who's always walked a different path, the subtle empowerment in Jones' words - and the unselfconscious way each lady followed her instructions, with hip swivels, booty shakes and full-body grooves - thrilled me and filled me with vicarious confidence too.

Then again, Jones is nothing if not an empowering figure. Even when she brings up men to strut with her - including, on this night, Beatle Bob, a lanky man named Lamar and Jon Hardy & the Public keyboardist Johnny Kid - she's always in control, showing her dance partners who's really in charge. Her confidence just radiates, the sign of someone who's comfortable in her own skin and ecstatic to be performing.

The weirdest parts of the show occurred when Charles Bradley arrived onstage to perform. Wearing a shiny gold lamé outfit and sporting a poofy hair (a wig?), he showed off some impressive dance moves and vocal tricks (he and Jones dueted on a cover of Sam Cooke's "A Change is Gonna Come" and he sang a few songs with opening act the Menehan Street Band).

But the encore was largely anticlimactic and a bit of an energy-killer, as the two performed a James Brown cover. A Dap-Kings show-ending staple, the song last night felt amorphous and unstructured, with Bradley randomly waiting like Brown, whenever he actually had the mic in his hand. (He kept dropping it, and Jones kept telling him to pick it up.) A friend commented to me after the show that Jones seemed like she almost dragged Bradley offstage by the end, as he seemed a bit out of it.

But this little stumble hardly detracted from the overall vibe of the night. Anyone who was at the show likely woke up with a soul hangover this morning -- and it's a sure bet that nothing feels quite so sweet. 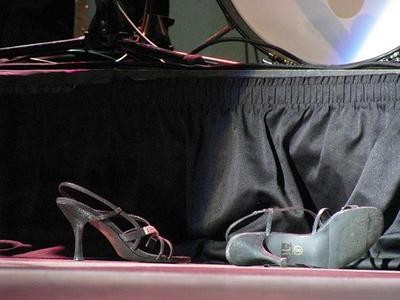 Several of the Dap Kings also performed as part of the opening act, the Menahan Street Band. (The group also features members of Antibalas and the Budos Street Band.) While at first somewhat off-putting to see a casually dressed group - i.e., the bassist sported a hoodie - playing laid-back soul-funk, the band was fantastic. Jazzy flute, head-nodding keyboards and subtle bass and percussion conjured only the best '70s soul-funk that was retro without feeling stale.

Critic's Notebook: Jones and most of the Dap-Kings showed up at the Halo Bar after the show; many also munched on hot dogs from the vendor outside. Jones - who was also sporting a kicky Obama '08 cap -- piled hers with mustard, relish, onions and sauerkraut, and chatted amiably with everyone who approached her. This socializing was on top of her merch-table signing and greeting, which she did right after the show as well. In person, she just gives off good, positive vibes; you can't help but smile after meeting her.

Also: The Rum Drum Ramblers played a credible set of sepia-toned blues after the show on the tiny Halo stage. They have an eight-song disc out we'll be covering soon (as soon as it comes in the mail - confidential to Big Muddy Records).