Well. That was fucking glorious.

Not content with merely revitalizing their sound on record – Death Magnetic, go buy it already – Metallica decided to kick their stage show in the ass and get back to the business of being the best live band in the world.

But of course, I'm biased -- I've believed Metallica to be the best live band in the world for 24 years, give or take some late-'90s months when they were only great. But to bring 14,000 people out on a Monday night and then hoist them on their shoulders for two-plus hours, well -- even Atlas shrugged once or twice, but Metallica never faltered.

The secret to the show this time around is simple: Just. Fucking. Rock. The stage is set in the round even though it's a rectangle, with all the amps running in two parallel lines down the center of the stage long-wise.

Lars' drums (a tasty burnt-orange sparkle Tama kit; double bass, five cymbals, high hats and toms kept to a minimum) are set slightly off-center on a circular riser. Yes, the riser rotates 90 degrees every fourth of the show, making a complete orbit by evening's end so that everyone can appreciate from every angle Lars' whip-like left arm action. Giant brushed aluminum coffins -- the same design as the cover of the album -- hang in two concentric rings of four overhead. During the heavier songs, such as "Sad But True," the inner ring of coffins sink slowly towards the stage, then cock at odd angles so their flood lights wash over the crowd. The coffins also have a nifty and very subtle effect: Their faces are slightly depressed so that when the lights hit 'em just right, a shrouded body seems to glow within. Kinda cool, especially because it was used sparingly. Add a dense but not dumb web of lasers and that's it.

The band came out hard, flying into and completely through "That Was Just Your Life," "Broken, Beat and Scarred" and "End of the Line" at break-neck speed. Then came Robert Trujillo's first teensy bass solo -- and there was all sorts of hellacious digital clipping and I got all butt-hurt and went home to start a petition.

But Trujillo's bass did make something in the lighting rig rattle nastily for a little bit before the sound guy straightened it out. And then that bass doodle went to the high notes and Metallica did that trick where they pick up the earth, crack it twice like an egg and break it open to release the molten goodness of "For Whom the Bell Tolls."

It was at this point that I lost all objectivity and reason. "For Whom the Bell Tolls" ratcheted the crowd up to batshit, no lie. The kid a few seats over from me couldn't have been more than 11, and his face had the look: Pop-eyed, mouth open, uvula flapping around in the cacophony coming out his throat, arms straining to tear right out the sockets as he threw horns at the stage. Metallica fan, right there. That kid's gonna smoke unfiltereds and get in a fight today, and I salute him.

Surprisingly, other songs were played after "Bell." How do you follow that shit?

Honestly, I don't remember. I was there, but I wasn't taking notes. I was the mirror image of that kid. When we made eye contact, he saw his future. Fat, forty, filthy and fucking jacked on Metallica. Son, remember last night forever. 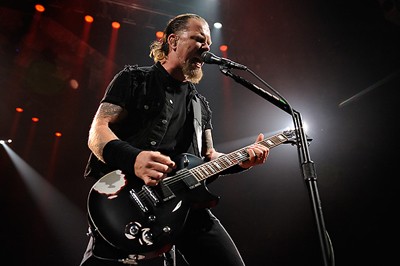 James Hetfield looks slimmed down and healthy. He had a little hop in his step, too, at one point jumping off an amp and skipping to the corner of the stage. Sounded good, too, and he seemed to be having fun. About the middle of the show, while perched on an amp, he leaned back out of his customary splay-legged hunch, looked around the crowd and grinned broadly while hammering out chords. It was the grin of every kid locked in his room playing air guitar, every garage band guitarist imagining playing for an audience during another post-work rehearsal, every working musician who gets a gig and pictures an arena instead of a bar -- it was the grin of someone who's been all those things and still appreciates the fact that it actually happened for him. It's been 25 years and who knows how many hundreds of Monday night shows, and James looked like he was having the time of his life. Maybe -- maybe -- he faked it, but I doubt it. That was unfettered joy, childish glee at making a sea of people bounce right on time with every crunching down stroke.

Kirk Hammett was, as expected, on fire. He just sorta ambles around the stage busting out ridiculous lead runs and strange noises, like he's in his living room noodling. I'd like to believe that's exactly what he does at home, too. Hammett shared some stinging twin leads with Hetfield on "Master of Puppets," and holy shit was that epic.

I'm an old fart, and so I really love the earlier albums. And if you've read this far, you're already aware of how unobjective I am, but come on -- come on! -- "Fight Fire With Fire" was so ludicrously tight and thrashy I saw 18 mullets spontaneously burst into being around me while Hetfield and Hammett were locked in. They also absolutely fucking destroyed "Whiplash." Picture a rotary saw the size of God's balls. Now picture that saw mounted on the front of a locomotive. Now picture that Sawcomotive tearing down the tracks at the speed of sound and smashing into the side of Mount Olympus – that was "Whiplash," with Hetfield playing the part of the locomotive and Hammett's lead playing the part of the saw.

And as heavy as that was, perhaps my favorite Hammett moment came in the first third of the show, when the other three briefly left the stage for drinks and new guitars. Kirk strolled along the edge of the stage like a gypsy guitarist and casually, effortlessly picked out the intro and riff to Uli Jon Roth's "Polar Nights." One guitar should not sound so beautiful, but it did. Roth is a forgotten master of the guitar (go buy the Scorpions' Tokyo Tapes on vinyl if you don't believe me) and Hammett's homage was so haunting and mournful that I was actually afraid that Roth had died and I hadn't heard about it.

Equally terror-inspiring was "Welcome Home (Sanitarium)." Lars' drums were facing the short side of the stage, and he was backlit so powerfully that his shadow loomed three stories tall on the upper bowl. A giant shadow-Lars flashing that wicked-smooth left hand and towering over James was absolutely bad-ass. Ulrich is still one of the most efficient and stylish drummers out there. He's really beautiful to watch in person, his technique so smooth that even if you know fuck-all about playing, you can't help but appreciate his artistry. And he also spits water like a blue whale -- easily fifteen feet straight up and he never misses the beat.

Metallica ended the night with the crowd favorite, "Search Seek and Destroy," with the house lights on and huge black inflatable balls dropped from the rafters. The balls lasted about 30 seconds, then they were all pinned down as souvenirs.

The crowd, we were into it, but Metallica was into it more. Trujillo just stopped playing and spun in circles, his bass floating up to shoulder level so that it was parallel to the floor. James laughed at him, Lars spat more water, Hammett wrenched something sick out his guitar -- it was Metallica, you know? Greatest live band in the world, kicking ass and having fun. They stayed a long time after the show, too, throwing stuff into the crowd and shaking hands with fans over the barriers.

My ears are still ringing, my throat is sore and my knees hurt.

I can't wait for them to come back.

Songs I know were played, but for the life of me I can't replicate the proper order:

That Was Just Your Life Broken, Beat and Scarred End of the Line For Whom the Bell Tolls One Memory Remains Where Ever I May Roam Welcome Home (Sanitarium) Sad But True Master of Puppets Cyanide Day the Never Comes Fight Fire With Fire Nothing Else Matters Enter Sandman The Unforgiven Whiplash Last Caress (Misfits) Seek and Destroy