Writer Ryan Wasoba participated in the 100 Guitars performance at the Pageant last night, which also featured the world premiere of the first movement of Glenn Branca's Symphony Number 14. Here are Wasoba's thoughts on the night and an analysis of the performance. Read more about the concert here and see below for an interview with Branca himself. Photos by Annie Zaleski.

At 1:55 p.m., I stood in the Pageant's loading dock with the smokers while three guitarists jogged towards us, late for the 1:30 sound check. Glenn Branca sat by himself, smoking on the sidewalk, and yelled to them, "Slow down! Slow down! They're still putting mics up on the fucking drums!" Inside, the venue's crew frantically searched for enough power outlets to plug in 68 guitar amplifiers, moving the amps around at the request of conductor John Myers.

During the rehearsal the day before, Myers and Branca had done some seat rearranging, moving the Baritone 1 section that I was a member of from stage left to stage right. Luckily, this meant that I was no longer sitting behind the Alto 6 that practiced his Van Halen shred licks in between every take of ever song. Unfortunately, now I was placed directly behind the Tenor 5 who wore wrap-around FM transmitting headphones over his skullcap, had 3 different sets of wrap-around earplugs, and would wave his right arm in the air dramatically after almost every note he strummed. Familiarity breeds contempt, and after two long rehearsals I was starting to get pretty damn familiar with some of my fellow guitarists.

On the Pageant's stage, the sea guitarists were parted in the middle like conductor John Myers was Moses. Monitors were placed in the center aisle to project the drums to the guitarists. Like the previous day, Meyer asked which players were unable to hear the drums and a few folks raised their hands. The level was raised to an ear-bleeding level in the monitor, and the headphone-skullcap multi-earplug arm-waver in front of me still bitched/moaned about not being able to hear. I fantasized about strangling him with my Monster Cable while me and my Baritone neighbor James mocked his patented strumming flair. 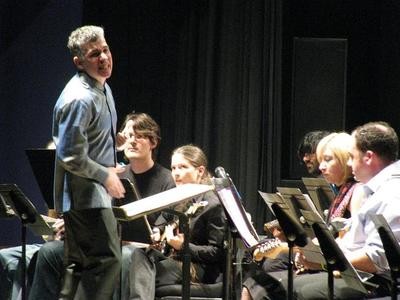 The rehearsal went smoothly and Branca thanked us earnestly for participating. The crew began tearing down the amps and setting up for the St. Louis Symphony Orchestra. The guitarists made a pile of cases in the back room and ate lunches out of styrofoam boxes labeled "Turkey," "Chix Salad," "Vegan," etc. I chose the "Roast Beef" box because I can't seem to get enough of that substance in my body. I sat with vegans who complained about the inclusion of mayonnaise and Cheetos in their boxes.

Minutes later, Glenn Branca emerged from his dressing room. "Who isn't using their mayonnaise?" he asked loudly. My vegan tablemate raised his hand.

The backstage area of the Pageant is lined with framed pictures of the venue's owner with famous and quasi-famous musicians that have graced the stage. Stephen from the Columbia, Missouri, band Umbros and I perused the wall, noting the ridiculousness of some of the photos. In a particular shot of hip-hop duo Clipse, venue owner Joe Edwards looks Photoshopped into the picture. My fellow Baritone Nils joined in, commenting that I look similar to Ben Gibbard in the photo of Death Cab For Cutie. The woman in our group from Dallas walked by right as I said, "Better Than Ezra has some jams" after seeing their picture on the wall. She gave me a look and then said, "Yeah, I guess. Some of their old stuff." I am pretty sure she didn't know what she was talking about.

My pre-performance jitters made it nearly impossible for me to concentrate on the opening set from the St. Louis Symphony Orchestra. Glenn Branca came out to debut a portion of Symphony No. 14. It was slightly more organized than the Hallucination City piece, and it relied heavily on the concepts of natural harmonics and microtonality. Frank Zappa's whimsical "G Spot Tornado" followed, which went into a piece by Edgard Varese which Zappa was openly inspired by in his composition. The two works were separated simply by a single gong hit, and both featured acid-trip dream sequence string work and playful percussion. The orchestra sounded wonderful, but the lack of amplification brought out the inappropriateness of having a symphony at the Pageant. During one particularly quiet section, I could hear a toilet flushing from the men's room.

The crew tore down the orchestra and set up the guitar-chestra in about twenty minutes. The musicians were called to stage and we all set up. The house lights went down and stage lights went up. We sat and we waited for three long minutes before John Myers came to the stage in an iridescent periwinkle shirt that glistened in the light. Myers silently gave the tempo of the first movement as 68 pairs of eyes fixated on him. With his mouth opened exaggeratingly large, he mouthed "one, two, three, four."

The first movement of Glenn Branca's "Symphony No. 13 (Hallucination City)," titled "March," is a slow dirge of abrasive counter rhythms that steamroll along while shrill, high-pitches float around in waves. The song builds slowly over the course of fifteen minutes, starting in a quiet march and ending in a complete mind-melt. At the piece's conclusion, Myers silently mouthed, "That fucking rocked."

Before the second movement began, my best friend (the Tenor 5 who wore wrap-around FM transmitting headphones over his skullcap, had three different sets of wrap-around earplugs, and would wave his right arm in the air dramatically after almost every note he strummed), had to change a string. The other 67 of us had to wait for him. A large pool of sweat had already formed around the periwinkle armpit of John Myers' flamboyant shirt. His right arm was surprisingly dry. The second movement, "Chant," began with thunderous strumming that was doomier than any doom metal song could ever hope to be. The piece chugged along at a moderate pace, its only breath of fresh air coming in the form of long, held out chords that reminded me of some of my favorite moments from ...And You Will Know Us by the Trail of Dead's Source Tags and Codes record played on the loudest stereo known to man.

Another long break occurred between the second and third movement while dude in the Alto 3 section changed a string on his Parker Fly guitar. My anxious eyes wandered around the crowd when I noticed that I could see some of the older, more well-dressed people leaving the venue. The third movement, "Drive," is the swiftest and most technical piece. Shards of dissonant guitar jump from different sections like morse code from the seventh circle of Hell. Less than a second after the song's cutoff, an enthusiastic audience member gave a loud "WOO!" He was obviously younger than those who had left, and his clothes were probably cheaper.

"Vengeance," the final movement of "Hallucination City" began with a slow, quiet build of chiming, double-strummed guitars. About one minute into the piece, a Ringo-esque drum fill cued in the most triumphant moment in the performance as all guitarists pounded their open strings. Of course the song gradually deteriorated into atonal territory, but the transition was smoother, much like the epic bridge to "Total Trash" by Branca's wunderkinds Sonic Youth.

Toward the end of the fourth piece, all the players dramatically strummed two of their strings while silently detuning the others. On cue, the sound of over 400 strings being pummeled with no regards to pitch bombarded the ear drums of every member of the Pageant, yet almost every face in the room bore a massive smile.

Music is not as social in our society as in many others, and it affects the way our music is made. Glenn Branca's DIY "anybody can do this" attitude recalls the inclusive principles of some non-Western music. Conceptually, 68 guitarists in St. Louis creating the same hurricane of noise might be the American version of polymetric African tribal drum circles. Branca writes dissonant music for dissonant times in our history. Perhaps in Glenn Branca's mind, we can all play in perfect harmony if there is no set harmony to begin with.