Album: Angels of the Deep

What it sounds like: If Frank Zappa made an all-instrumental smooth jazz record.

Best Track: “Angels of the Deep” The title track is a doozy. It opens with ocean sounds -- a creaking dock, gulls and waves -- and then with a whoosh there’s a running hi-hat and far-out synthesizers and guitar. It actually sounds like a precursor to Air or maybe even Explosions in the Sky, since a whole bunch of mini-crescendos are built into each tune. The bass playing by Duane Stuermer is as phenomenal here as it is throughout the record, with intricate, frantically paced riffs that drive the songs. There’s also a crazy, psychedelic synthesizer solo that sounds like an 8-bit Nintendo theme song deconstructed and put back together about twenty different ways, and some of the only vocals on the entire album, just some “oh oh oh” vocal harmonies that complement the instrumentals.

Worst Track: “Her.” I smell a smoov jazz tenor sax solo…oh, now we’re getting into Ron Burgundy flute on fire 100 notes/second territory…we’ve got screeching, wailing and shrieking notes…the guitar has joined in…I’ve skipped to the next song.

Who you can thank for the amazing cover art: Photo by Ed Caraeff. Art Direction by Ron Coro. Mustache! 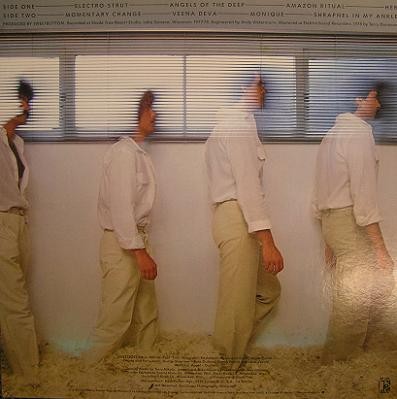 Interesting Facts: Sweetbottom was formed in Milwaukee in 1973 by guitarist Daryl Stuermer and his bassist brother Duane. They earned a spot as the house band at the Milwaukee club Sardino’s Bull Ring. They enjoyed a popular local following and a little national exposure as jazz-fusion acts like Herbie Hancock became popular. They released three albums, including a self-titled LP, this one before they broke up in 1979, and a live reunion album in 2002.

Legend has it that Daryl Stuermer got his break when Frank Zappa saw him perform with Sweetbottom in 1975. Zappa’s keyboardist George Duke got him an audition with jazz violinist Jean-Luc Ponty, and later a spot as Genesis’ touring guitarist. Most famously he’s been with Phil Collins since the start of Collins’ solo career, touring and recording with him as well as earning songwriting credits for the Collins songs "Something Happened On the Way To Heaven," "I Don't Wanna Know," "Doesn't Anybody Stay Together Anymore" and "Only You Know and I Know."

Daryl, however, does not appear on this Sweetbottom record, having already ditched the band for the French fiddle player. His brother Duane, however, holds down the bass, lead vocals and Taurus pedals.

Sweetbottom reunited in 2002, recorded a live album and toured in support of it.

Here’s the money quote from Darryl in the Milwaukee Journal-Sentinel from their article on the reunion that really sums up the band:

"We used to just go on forever, with one song lasting for 15 minutes," Stuermer said. "We now play that same song for six minutes. We actually feel we're a better group today than back then. We played for years and years, and we finally got it."