Album: Into the Gap

What it sounds like: The Police with David Bowie vocals doing world music. Also, 1984. 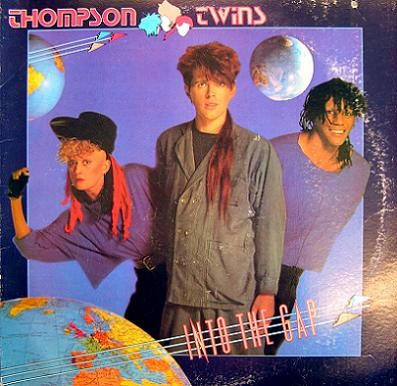 Best Track: “Doctor! Doctor!” A winner simply for the unintentional comedy value in some of the lyrics. The chorus: “Doctor, doctor, can’t you see/ I’m burning, burning/ oh doctor doctor, is this love I’m feeling?” It’s either love or the fact that he forgot to take his penicillin.

This song has vocals that sound a bit more like the Cure than Bowie and, like every song on the album, it features a hearty dose of synthesizers, drum machines and keyboards.

Worst Track: “You Take Me Up.” The next track after “Doctor! Doctor!” has all kinds of shit going on. There’s a harmonica backed by congos, then synthesizers, drum machines and what sounds like a xylophone all doing some crazy, bizarre dub-meets-new wave rhythm. The singing sounds like Bowie mimicking Bob Marley.

The choice lyrics: “I’m trying to hard (backup vocals) Too hard, too hard/moving in circles too hard too hard.” Yup, you’re trying too hard.

Who you can thank for the amazing cover art: Photo by Peter Ashworth, art direction by Alannah Currie and Nick Marchant.

Interesting Facts: Via Wikipedia: The Thompson Twins (who, as you might have guessed from the cover art, aren’t so much twins) formed in London in 1977. The band signed to Arista in 1982 and released Set, which featured the song “In The Name of Love” and Thomas Dolby on keyboards on a few tracks. Its first major chart success came in 1983 with the singles “Lies” and “Love On Your Side” (both from the album Quick Step and Side Kick).

The Twins cut its membership down to a trio that year and traveled to the Bahamas and recorded Gap with Bob Marley’s old producer, Alex Sadkin. (This likely explains the horrific new wave/reggae hybrid on “You Take Me Up.”) From this album, “Doctor! Doctor!” was a top five hit, as were “Hold Me Now” and “The Gap.” Rather appropriately, they opened for The Police on tour in support of the album.

1985’s Here’s To Future Days, which featured the hit single “King For A Day,” wasn’t quite as successful, even though legendary producer Nile Rodgers worked on the album. They had a few dance singles in the late ‘80s, including a remix of “In the Name of Love” and then the two founding members Alannah Currie and Tom Bailey had a kid together.

The Twins’ last album, in 1991, was titled Queer and they haven’t done much since. [Dorky New-Wave Fan Ed. Note: Currie and Bailey released two albums in the 1990s under the moniker Babble, and they’re well-worth tracking down.] Currie and Bailey split up in 2003 and later divorced.