A microKorg synthesizer sat atop the dual stand of Jicks keyboardist/guitarist Mike Clark. On the Pageant's floor area, aged hipsters and curious teenagers adorned in thrift store garb stood with arms crossed or hands in pockets and bobbed their heads. In front of me, a husky twentysomething wore a Zeppelin shirt with a plaid flannel tied around his waist Bill-and-Ted-style. On stage, an Orange-brand vintage amplifier projected riffs from a used-bin ivory Fender Jazzmaster, which slacker guitar pioneer Stephen Malkmus was playfully strumming.

The microKorg may seem insignificant, but the keyboard, which went into production in 2002, was the only visual or audible confirmation that it was not 1993. The crowd at the Pageant seemed drawn to the show not for love of Malkmus' post-Pavement body of work with the Jicks (including this year’s Real Emotional Trash, but for his almost cult-ish celebrity status. (Did I mention he was in Pavement?)

With a guitar slung around his neck and a microphone in his face, Malkmus perfectly embodied the apathetic anti-rock star image he helped create over a decade ago. But instead of taking on the too-cool stage presence of a shoegazer, he bounced and leaped around the stage lightheartedly, half enjoying himself and half mocking the cliched moves and poses of frontmen past. During "Hopscotch Willie," one of Trash's more musically ambitious numbers, Malkmus pretended ironically his guitar neck was a machine gun and shot the crowd like a movie mobster. His lackadaisical jumps during "(Do Not Feed The) Oyster" were so drenched in sarcasm that it took a moment of hindsight to realize that these jumps were in reaction to his band rocking pretty hard. 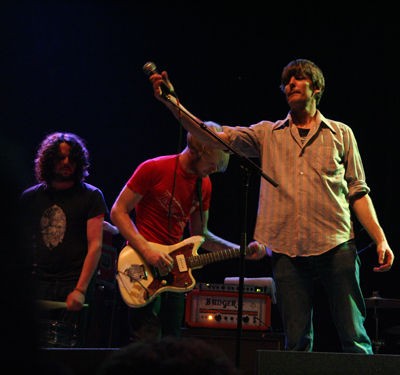 Between songs, Malkmus didn’t attempt to hype up the crowd in the conventional way. He barely introduced songs -- and when they were, it seemed less of an attempt to excite the crowd than an effort to educate them on the band's material. He casually introduced band members and didn’t give a last song warning. His inbetween song banter was extremely conversational and, despite the tendency of our city's showgoers to yell stupid things at performers, was not mocking or confrontational.

When Stephen noticed a kid in the front row wearing a shirt that said "Gold Soundz" on it, he sang the song's first two words, "Go back," in perfect key and delivery and then chuckled as the crowd cheered back. Seconds later, another audience member in the front row handed Malkmus a homemade guitar pedal to which he replied, "Huh? What's this? Does it have a battery in it?" and immediately unplugged a pedal from his setup and replaced it with his new gift. Apparently, it was a distortion box called "Real Emotional Fuzz."

As the band's name would imply, Malkmus is only half of the story. Through the evening, the Jicks proved that it’s more than a mere backing band. (In fact, bassist Joanna Bolme spent almost as much time bantering with the crowd as Malkmus did.) Mike Clark mostly filled out the songs with subtle synth work. In the rare times when he pulled out his Gibson SG, his inner slacker came through; it actually sounded more like two tracks of Malkmus than two separate guitarists.

The biggest news story with the Jicks as of late has been the inclusion of former Sleater-Kinney/Quasi drummer Janet Weiss. Her elastic drumming was extremely complimentary to the band's loose style, and her drum fills were dramatic motorcycle jumps across rows of flaming cars, garnering heaps of tension by barely landing properly on the right side of the beat.

Before the Jicks played their last pre-encore song, Bolme joked on stage, "Yeah, let's play the ten-minute song now." This led to the predictable heckle of "FREEEEEBIIIIIRD," to which Malkmus replied, “Not THAT ten-minute song."

We were all fortunate that this request wasn’t aimed at openers Blitzen Trapper; they might have actually played it. The band's records are sonically experimental pop adventures, but live their tunes transformed into a twisted brand of southern rock, as if somebody had left a copy of Lynyrd Skynyrd's Pronounced 'lĕh-'nérd 'skin-'nérd in the sun for too long.

The band's set relied heavily on tracks from this year's Sub Pop release Furr, which has drawn many comparisons to Bob Dylan's Basement Tapes. Live, lead singer Eric Earley's tastefully lazy vocals, curly hair, and neck-worn harmonica furthered the comparison. Unfortunately, the band only played three tracks from last year's wonderful Wild Mountain Nation, as those three simply had more energy and quirk than the group's newer songs. At the conclusion of Nation standout "Miss Spiritual Tramp," drummer Brian Adrian Koch hit his crash cymbal like it owed him money, knocking the stand completely over and flinging the bronze metal disc clear across the stage.

Janet Weiss came out at the end of Blitzen Trapper's set to lend an extra pair of hands and second drum kit to the wonky garage rocker "Devil's A Go-Go." On record, the song features disjointed percussion held together by duct tape and string. Live, with the addition of Weiss, the song was a hectic party, as if the band's parents were out of town and they trashed the house while playing maracas and tried to get the song finished before the cops arrived.

The members of Blitzen Trapper returned the favor by coming out during the Jicks' encore to perform "Funk #49" by the James Gang. With eight members on stage and Malkmus simply rocking the mic, the classic-rock standard was oddly reminiscent of punk bands covering Black Flag songs at the end of their sets. It was a perfect mess and completely appropriate to Malkmus' lifelong mission of embracing certain rock stereotypes and destroying others, all in the name of fun.