On Monday night at Rockstar Nightclub (8658 South Broadway), Terror, Blood Stands Still and On Broken Wings played as part of a quickly moving six-band hardcore show that was over at about 11 p.m.

Although the venue promises to treat its patrons like rockstars, the bands on this "Choose or Lose / Vote or Die Tour" aren't.

Neither, apparently, was the crowd. Need proof? Here's the dress code for the club -- which was formerly known as Rock Island -- is strict, more akin to a dance club than a rock venue. 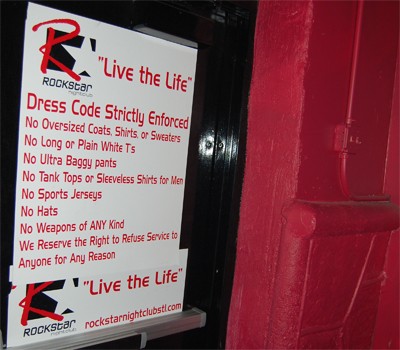 And here were the rules on the list above broken at Monday's show:

Blood Stands Still, from the LA area. The four-piece's sound is highly reminiscent of the early 2000s hardcore of Victory Records.

Blood Stands Still merch. They were also looking for a party, or a place to stay for the night.

The guitar tone, snare drum and vocals reminded this reviewer of Hatebreed, so it was no surprise when the band obliged to the shouted requests from the crowd for a Hatebreed cover, and performed "Empty Promises."

The Ghost Inside, also from the Los Angeles area, differed in style from the working-class vibe of Blood Stands Still. A tight set by this younger act reminds listeners of Embrace Today's sound, with a faster pace than the openers and more metallic guitar tones.

As the show progressed, a theme quickly appeared -- early 2000s hardcore. A Ghost Inside emulated the stage presence and rockstar poses of another metallic hardcore band from the LA area -- Eighteen Visions -- but lacked the cock-rock attitude that defined 18V. The young act ended its first show in St. Louis with a metallic version of American Nightmare's "AM/PM." A handful of the mostly younger audience members shouted along the lyrics.

Side note: Among many concert-goers, booze was flowing heavily, and with mixed results, at least in the men's room. 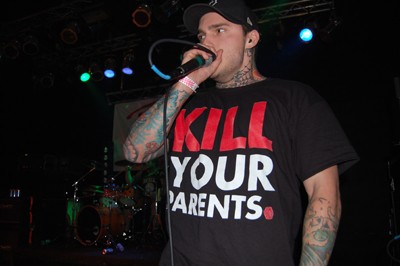 On Broken Wings' live show may earn them the title of heaviest, most violent band in hardcore. Self-described as "mosh metal," the Boston-based band has a strong following in St. Louis, as a dozen or so fans threw their hands up in the air to sing along with the pitbull vocals of singer Jonathan Blake. When the opening chords rung out for OBW, the floor in front of Rockstar's small stage opened up as about twenty guys in their midtwenties jumped around and threw punches.

Since getting together in 2001, the band has clearly carved its own corner of the hardcore scene with chugging, death-metal guitar chords and a heavy rhythm section, punctuated by a piercing snare drum. The St. Louis audience responded accordingly, shouting for additional songs as OBW's set ended. The fill-in drummer didn't know much beyond the band's prearranged set, but the band finished out with "600 Cubic Centimeters."

The band's always energetic, often-quoted singer Scott Vogel, came out on stage, Bud Lights and water bottles in hand, to greet the crowd, who kept their distance from the front of the room. As with most hardcore shows that cater to violent mosh-metal, the hardcore horseshoe -- an empty space directly in front of the stage -- had slowly formed. But when the LA band began its set, starting with the blistering "Better Off Without You," the empty space filled in and people started diving off speakers into the audience.

The attendance for the Monday night show filled out better than expected, though not drawing the most diverse group of people. But for mosh die-hards, I doubt there has been or will be another St. Louis show this year that topped the one Monday night. The 350-person-capacity venue filled to about 150-175 people, according to staff there. The only time Rock Star has sold out was the Helmet show on July 25.

Terror finished its set with "Overcome" and the crowd rushed the stage to sing along. Afterward, most in the crowd headed for the exits before As Blood Runs Black played.