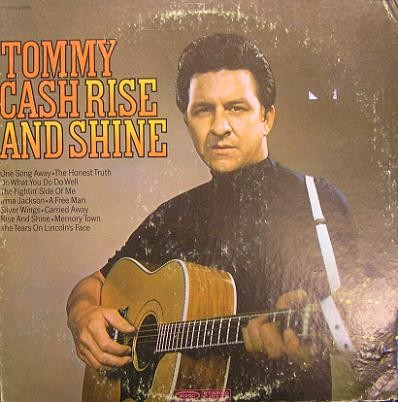 What it sounds like: Johnny Cash -- but with a higher voice, no attitude, less talent, mediocre songwriting and much, much poorer production. So really, it’s a cheap imitation of Johnny Cash.

Best Track: “Irma Jackson” This song was written by Merle Haggard, and it’s pretty much the only decent one on the album. It’s about a failed interracial relationship and has a few great lines like, “I’d love to shout my feelings from a mountain high/tell the world I love her and I will until I die/but we’re living in a world that don’t know love is color blind/and that’s why Irma Jackson can’t be mine.”

Musically, the song uses the same cheesy four-part harmonies and formulaic twang that pervade every other track. When he tries to bring the song home during the crescendo and channel his older brother, it fails miserably and leaves you thinking that it would a pretty damn good song -- if only Johnny had sung it.

Worst Track: “The Fightin’ Side of Me.” This was a really tough call. There was a bad take on nearly every era of Johnny Cash up to 1970, including “Rise and Shine” (which sounded just like “Get Rhythm”), a handful of gag-inducing ballads, a few numbers that try and do Johnny’s spoken-word style storytelling, and then this song, which tries to sound like “The Man in Black,” and rail against injustice.

The big problem is that we’re talking Toby Keith injustice. Let’s go straight to the lyrics: “I hear people talkin’ bad about living in this country/running down the wars we fight/and gripin’ bout the way things ought to be…well when you’re running down my country/ you’re walking down the fightin’ side of me.”

Who you can thank for the amazing cover art: Photo by Bill Grine. He looks just like Bruno Kirby, that dude from City Slickers and When Harry Met Sally, only if Bruno Kirby was cast to play Johnny Cash in a biopic. 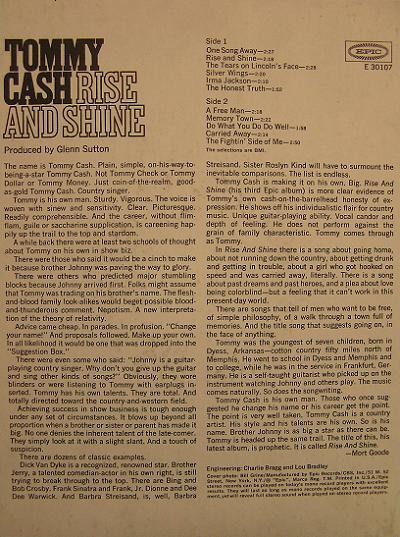 Interesting Facts: Via Cash’s official site: The youngest of seven Cash children, Tommy was born eight years after Johnny. Like his brother, he served in the Army in Germany. He got his start in the music biz playing in Hank Williams Jr’s band. He released his first solo album in 1965 but didn’t score a hit until 1969 when his stellar JFK/RFK/MLK tribute “Six White Horses” finally made him famous for being something other than Johnny’s baby bro. He had two more top ten singles: “Rise and Shine” the Carl Perkins-penned title track from this album, and “One Song Away.” He fell off the radar after the top 20 single “I Recall a Gypsy Woman” in 1973.

He just released a new album in September and continues to tour nationally. He often does “a musical tribute to Johnny,” which I’m sure is depressing. He also lends his voice to commercials for Pepsi, Burger King, and Beechnut chewing tobacco, just to name a few.

Also, the back cover of this album (see above) is priceless. Not only does it compare Tommy to less talented older siblings like Dee Dee Warwick and Roslyn Kind (Barbara Streisand’s lil’ sis), it just oozes corniness: “Tommy is his own man. Sturdy. Vigorous. The voice is woven with sinew and sensitivity. Clear. Picturesque. Readily comprehensible. The career, without flim-flam, guile or saccharine supplication, is careening happily up the trail to the top and stardom.”

Also: “There were those who said it would be a cinch to make it because brother Johnny was paving the way to glory. There were others who predicted major stumbling blocks because Johhny arrived first. Folks might assume that Tommy was trading on his brother’s name. The flesh and blood look family look –alike would beget possible blood and thunderous comment. Nepotism. A new interpretation of the theory of relativity.” The whole thing is like that. Really.