(Part One of our Danzig interview outtakes can be found here.) In Ferris’ interview, Danzig denied, and then downplayed the possibility of a Misfits reunion, the news of which originated with former Misfits guitarist Doyle Wolfgang Von Frankenstein. (Danzig produced his 2007 Gorgeous Frankenstein album.) Former nu-Misfits frontman Michale Graves since confirmed the reunion talks. And Only is only giving interviews with the provision that there be no reunion questions.

Read on below for Danzig's take on the matter -- and about the status of all of his future musical endeavors. Again, Danzig's Blackest of the Black tour will be in St. Louis on Sunday night, October 26. 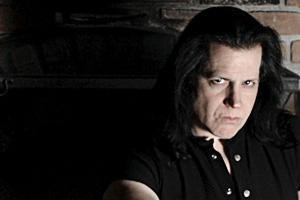 D.X. Ferris: With [2007’s odds-and-ends compilation] The Lost Tracks of Danzig, were you glad to get [power ballad] “Cold Cold Rain” out there? Glenn Danzig: I was glad to get a lot of stuff out there with The Lost Tracks. I had fans asking about that stuff for so long.

Across your catalog and on Lost Tracks, you have stabs of piano and strings here and there. Do you have more stuff like that lying around? I have a ton more unreleased songs, but they’re not going to get released. That’s the cream of the crop.

But as far as working with piano or strings – Usually, on Danzig stuff, there’s piano on everything, from disc one up till now. You don’t hear it, but it’s there.

But do you see yourself recording material, not so much like a [1992’s semi-classical album] Black Aria, but maybe sitting down at a piano and writing something like Nick Cave’s movie scores? No. [Laughs a hearty, extended laugh.]

So it’s a nice color to have on the palette, but… But I’m not going to do a piano record, no.

How about Black Aria 3 – are you any closer to that? No. I haven’t even thought about it, really, I’ve been so busy. I don’t know when it’ll come out or what it’s going to be about yet. I have a couple ideas I would like to do with it, but I don’t even know yet.

What keeps you busy day to day? I have a ton of stuff going on. I’m so busy I can’t even change my mind. I’m so busy right now that I’m frazzled. I’d like to have a week where I don’t do anything.

Are you recording on the next Danzig album? Yeah. I’m working on tracks that will probably for another Danzig record. I’m going in the studio tomorrow with Tommy [Victor] and Johnny [Kelly] here in L.A. while they’re all out there.

How about the blues album or the Hank III record? There won’t be a Hank III album. There might be a couple songs that we release some day. The blues album, Jerry Cantrell ran into each other at Ministry, which Tommy was in. And we go, “Yeah, we’ve got to do that record.” We’ve both go to find the time to do it.

How about Ge Rouge [Danzig’s long-delayed full-length directorial debut, a horror movie set in turn-of-the-20th century New Orleans, based on his comic]? Yeah. I was talking to another production company. We pulled it from the one production company because they never put up the production money, and they kept wanting me to do rewrites. So after five or six rewrites, it was like, “OK, this is it, we’re voiding the contract.” So after that, we’re shopping it around to different people.

So you’d still like to see it happen? Yeah. Actually, we’re in the middle of negotiating to put the Satanika movie together with another production company. I won’t be directing that, but somebody else will.

I know you don’t like talking about specific songs and what they mean, and you’ve never really explained what 138 means. Yeah I did. It’s about violence. It’s a number for violence. I’ve said that the whole time, a million times. [Chuckles]

The Misfits reunion, Jerry and Doyle, fact or fiction? No. It’s not gonna happen.

But what is really proposed? No. No.

Doyle said that you were going to do a record and tour. No. That’s not true.

Not at all? No. I mean, people had talked about it. But nothing ever happened with it.

Was that coming from your end or their end? I don’t really remember. I just know that… Nothing like that ever happened. It never even got beyond a talking thing, you know what I mean?