What it sounds like: That unique Jackson Browne blend of singer/songwriter, country, early Springsteen, and late ‘70s/early ‘80s rock (like the more sissy Van Halen songs). Basically, he was the Conor Oberst of those decades.

Best Track: “Hold On Hold Out.” The final track closes the album with authority, blending everything that’s cheesy, epic and great about Mr. Browne.

It opens with a nice catchy piano lick that’s soon joined by a collection of drums, string synthesizers and guitars that build slowly until they’re rollicking as the verse starts. The Arcade Fire would be proud.

Browne always has a country-western-storyteller way of writing songs and this one is no different, begging a lost love to “hold on, hold out” for him. Best line: “Give up your heart and you find yourself/living for something in somebody else/sometimes you wonder what happens to love/sometimes the touch of a friend is enough.”

There’s a shredding guitar bridge with the piano keeping the melody, a couple more verses with the sound getting bigger and bigger before an awesome climax where Browne says simply “I love you” as all the instruments crescendo. Great song.

Worst Track: “Of Missing Persons.” At his worst, as he is here, Browne is a rich man’s Kenny Loggins. First we get a cheesy opening stanza “Your father was a rounder/he played that rock and roll/a leaper and a bounder/down to his gypsy soul.” Then it’s a bawling steel guitar, then some noodling guitar solos, and then some soaring backup harmony vocals. The song is five minutes long and it all kind of sounds like that. Yawn.

Who you can thank for the (not that) amazing cover art: Album Cover by Dawn Patrol. Photography and design by Jimmy Wachtel. Kind of looks like Beatle Bob in that second one, doesn’t he? 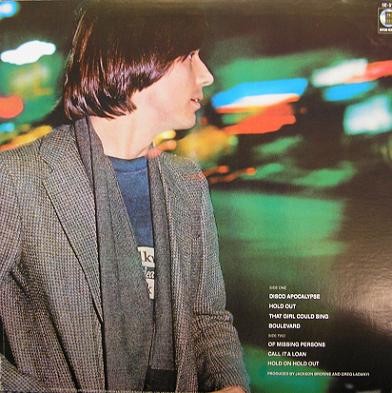 Interesting Facts: Via Wikipedia: Ok, I’m not going to lie, I picked this album not because it has silly cover art or because it’s atrocious but because I’m super stoked for the Jackson Browne gig at the Fox Theatre this Sunday. Browne’s song “Doctor My Eyes” is one of my all-time favs.

Browne, a member of the Rock and Roll Hall of Fame, is best known for writing the Eagles hit “Take it Easy,” the Forrest Gump soundtrack staple “Runnin’ On Empty,” and “Somebody’s Baby” from the soundtrack of Fast Times at Ridgemont High.

He was born on a U.S. Army base in Germany and moved to California when he was young and joined the awesomely named Nitty Gritty Dirt Band in 1966. He eventually quit and moved to Greenwich Village where he was a songwriter for everyone from Joan Baez to the Byrds to Rush. He played guitar for Nico on her album Chelsea Girl and also wrote her song “These Days.” [Ed. note: Her AWESOME song.]

He released his first, self-titled album in 1972, which was anchored by the aforementioned classic “Doctor My Eyes.” After a couple moderately successful albums, he released Late For the Sky in 1974, the title track of which was eventually featured in Scorsese’s Taxi Driver.

He also convinced Asylum, his record company, to sign Warren Zevon. The album The Pretender was released in 1976 after the suicide of his wife Phyllis, and features a title track that Wiki claims is his “Magnum opus.” Running on Empty followed in ’77.

Browne dated an 18 year-old Daryl Hannah for a time until she left him for John F. Kennedy Jr. He released Hold Out in 1980, which was his first album to reach number one on the Billboard pop charts.

Browne has done a ton of political work, including benefits for Amnesty International and has been vocal in every presidential campaign since 1980, including this one, in which he sued John McCain for using “Running on Empty” in a commercial without his permission.

His latest album, Solo Acoustic Vol. 2 dropped in March. [Correction: Time the Conqueror is his latest disc.] Go see him at the Fox!