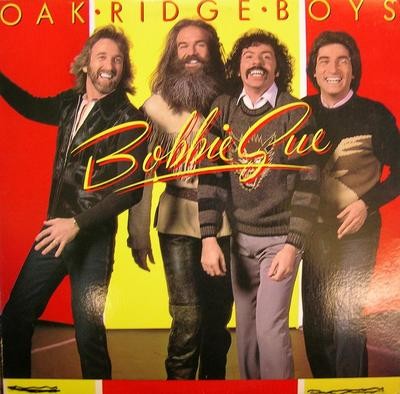 What it sounds like: Hank Williams Jr. without the football, some Beach Boys-style vocal harmonies and also some yodeling.

Best Track “Bobbie Sue.” The title track has a Buddy Holly/Everly Brothers type vibe to it and a saxophone lick that sounds exactly like the catchy part from “Yakety Yak” by the Coasters.

The lyrics are about a girl named Bobbie Sue (no apologies to Holly’s “Peggy Sue”), and eloping with her: “My Chevy’s humming and she’s holding me tight/we’re going to find a preacher and we’ll do it right.”

About as palatable of country/rock crossover hit as you’ll ever hear.

Worst Track: “Would They Love Him Down in Shreveport.” This was a tough call, because the album falls off a cliff in terms of quality after “Bobbie Sue,” with a variety of “She took my dog and my toothbrush” songs, wretched piano ballads and rock crossovers that feature yodeling.

“Shreveport,” however, takes unintentional comedy to a new level. The “Him” is Jesus and the song is about intolerance. The lyrics, sung over a swelling string and piano arrangement, are priceless: “If He made the water into wine and gave it to their daughters, would they love Him down in Salt Lake today?”

And it ends with: “Would you laugh and call Him crazy if Jesus came to your town today?” Probably.

Who you can thank for the amazing cover art: Art Director: George Osaki. Photos of the Oakridge Boys: Glen Christensen 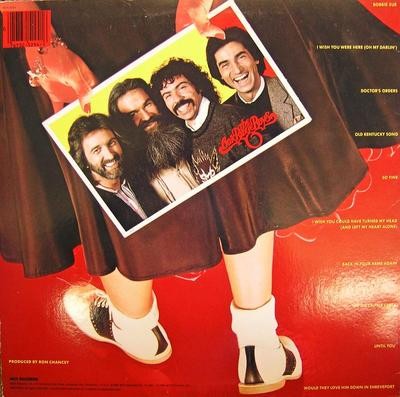 Interesting Facts: Via Wikipedia: The Oak Ridge boys date all the way back to 1945, when they were the Oak Ridge Qaurtet. They first recorded together in 1943 when they had the far better name of Wally Fowler and the Georgia Clodhoppers.

They cycled through members on three different labels (Skylite, Starday and Checker), including Jim Hammill who was later a key figure in the Kingsmen. Their biggest break early on was backing Elvis at a 1972 performance in Madison Square Garden. They also recorded “Praise the Lord and Pass the Soup” with Johnny Cash and the Carter Family.

In 1977 they stopped making gospel and started making country (a huge distinction, apparently) and recorded the album Y’all Come Back Now Saloon (Get it?). That record had a number one single titled “I’ll Be True To You.” They released a greatest hits record in 1980, then this album in 1982. “Bobbie Sue” was a number one single on the country charts.

In 1983 they recorded the album The American Way, with a title track that eventually became the anthem for Miller beer commericals. Shortly thereafter William Lee Goldman was kicked out of the band for his “Mountain man lifestyle” which included not cutting his beard, hair and fingernails. Like a good mountain man, he sued the band and eventually settled out of court.

They did a bunch of other albums, including a Christmas album, a polka album, a patriotic album, and more. They released an album in 2007 and have plans for another in 2009. All of the founding members are dead and the band has had more than 28 line-up changes.