"It's good to be home," said Burnett, before delivering his only solo performance of the evening, "Earlier Baghdad." Afterward, acknowledging the song's dark subject matter, Burnett noted, "We're in a political season. And the only real politics is love." 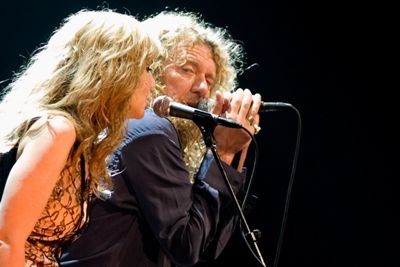 He then stepped aside to reintroduce Alison Krauss, who brought the bluegrass back in the form of "Wildwood Flower," followed by an a cappella rendition of the gospel standard/O Brother, Where Art Thou? soundtrack hit "Down to the River to Pray."

Much has been written about the Grammy-winning pairing of Krauss and Robert Plant, and the Fox show, the second installment of a brief autumn coda to the duo's spring-summer tour, drew a sold-out crowd to the Fox.

"Duo," though, is a misnomer. Like the album before it, the live-in-person incarnation of Raising Sand owes its very existence to the St. Louis-born guitarist Burnett, whose sonic aesthetic pervaded the entire Fox evening, from the subtly retro, radio-era stage set and awesomely taut backing-band presence to the song choices and arrangements. In one of the night's few spoken asides, Plant called Burnett a "lodestone" -- and rightly so. 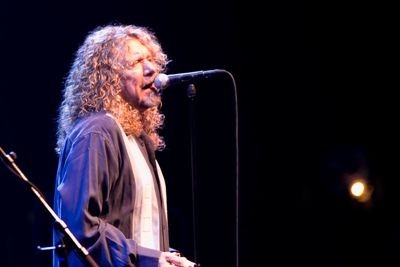 Featuring Buddy Miller on guitar and pedal steel, Stuart Duncan on banjo and various other stringed things and drummer Jay Bellerose and stand-up bass player Dennis Crouch anchoring the rhythm section, Burnett's combo abetted Krauss and Plant on a 90-minute musical voyage that mixed material from America's country-music breadbasket with classic-rock chestnuts from Led Zeppelin's heavy-metal heyday. After an jazz-infused opening set by Sharon Little, the lanky Burnett strolled out from the darkened wings like a preacher man (clad in the proverbial long black coat), followed by Krauss and Plant, who took center stage as the band took off with Raising Sand's opening track, "Rich Woman," followed by the Ray Charles country-fied R&B number "Leave My Woman Alone."

While the 2007 album drew sparingly from Plant's catalog, a good chunk of the concert setlist -- "Black Dog, "Black Country Woman," "The Battle of Evermore" -- was pulled straight out of the 1970s Led Zeppelin songbook. Strange as it may seem, the classic Brit-rock material is a good match for Krauss. Perhaps that shouldn't come as so much of a surprise, though: The Zeppelin IV version of "Evermore" featured vocals by the late Sandy Denny, of Fairport Convention fame, and it's not a huge stretch to jump from Denny's ethereal vocals to Krauss'. Earlier in the show, Plant's "I'm in the Mood" medleyed its way in to the old English ballad "Matty Groves" -- another Denny-era Fairport mainstay.

In an interview published in last week's RFT, Burnett tells Roy Kasten that he likes to work live in the studio, rather than layer the music with overdub after overdub. Whatever effect that approach may have had on the Raising Sand sessions is nothing compared to the immediacy of a live concert setting. As Fox-goers sat (and later stood) enthralled, Krauss, Plant, Burnett and company delivered the goods with shimmering incandescence.

Setlist is below; if you hanker for a more direct taste of the live act, search YouTube for Plant and Krauss.