During last night’s show, I wondered why I bother listening to anything besides Neko Case’s music. Her songs contain all the crucial elements of meaningful art: sorrow, heartbreak, righteousness, self-penned mythology, contrition, empathy, absurdity – all of which are framed by twangy guitars, resonant upright bass and sugary harmonies. Her show at the Pageant was an affirmation of what most in attendance already knew: Case is one of our generation’s best and most original singer-songwriters, her pitch-perfect voice and dark humor setting the table for taut, loaded lyrics. 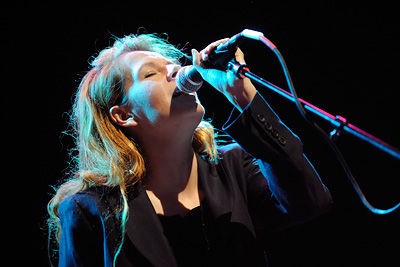 Last night’s set was, as expected, a mix of favorites from her four studio albums and new songs from her upcoming album Middle Cyclone. Taking the stage in jeans, a black blouse and black blazer, Case and her five bandmates began with the down tempo-but-strident “The Tigers Have Spoken,” from the live album of the same name. New songs aside, she didn’t go any deeper than 2002’s Blacklisted, and those songs – the apocalyptic “Deep Red Bells” in particular – were met with enthusiasm from the fair-sized crowd. (It seems entirely plausible that what seemed to be a lower-than-expected turnout can be attributed to last night’s Robert Plant / Alison Krauss show at the Fox.)

Case half-joked that she was still touring behind Fox Confessor Brings the Flood (which was released two-and-a-half years ago), and most of the standouts came from that album. Case flubbed the final verse to “Margaret vs. Pauline,” but in her typical self-deprecating fashion, she turned it into a moment of shared levity. (Backup singer Kelly Hogan helped jog Case’s memory by simulating riding on a subway car, fitting for a song in which “two girls ride the Blue Line.”)

As on the album, “Star Witness” followed “Margaret vs. Pauline.” I don’t want to handicap Case at this point in her career, but she may never write a song that rivals “Star Witness” – though it’s hard to say why, exactly. Lyrically, it’s a confusing song about car crashes, getting high, and the institutionalized racism inherent in the ways that the police and media deal with inner-city violence. But in Case’s hands, the song is about so much more – her performance last night crystallized the mystery and yearning bound up in the thorny lyrics. Her delivery made one of the song’s central lines – “oh, how I forgot what it’s like” – come across as a universal truth.

Five new songs were played last night, and, at first listen, they appear to fit into the blueprint established on Case’s last two albums. They didn’t seem to have the darkness or spookiness of some of her more recent work, but sonically they ran the gamut from rollicking alt-country to a more spare, open sound. Credit goes to her crack backing band, especially guitarist Paul Rigby and pedal steel player Jon Rauhouse, for creating the varying shades of red and blue needed make the new material stick.

Case peppered the latter half of the set with a few covers: Harry Nilsson’s “Alimony,” a sweetly sad song about the connections we miss from busted relationships. (It’s easy to see why it appeals to Case.) The other, Bob Dylan’s “Buckets of Rain,” featured a more folksy, bluegrass-like approach. The night ended with “John Saw that Number,” a song in which Case reclaims the story of John the Revelator from Gillian Welch and turns it into a revival-worthy dance party. The song is an object lesson in what Case does best – she takes a mysterious, symbolically loaded event (like the inspiration behind the Book of Revelations) and turns it into a sing-a-long. It put an uplifting cap on the twenty-song set.