In this week's paper, Christian Schaeffer reviews the Helium Tapes' self-titled CD. He had this to say: 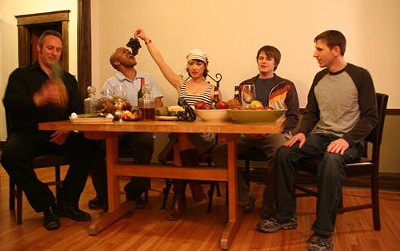 Local scene veteran Sunyatta Marshall (Fred's Variety Group) leads the Helium Tapes, a quartet with a flair for dark-tinted power pop and dense, swirling riffs. The self-titled disc is the band's debut, but several years of gigging has solidified its sound and ethos — most songs begin with tidy melodic hooks that transmogrify into flowering, far-out explorations while never stretching too thin. "Magnolia Bloom," one of the album's highlights, provides the best example of this method. Powered by a relentless ride cymbal and simple bass pattern, the song spirals outward with a yawning guitar crescendo and Stereolab-like levels of repetition. The track also highlights Marshall's singing style — she plays it cool for the verses and shoots for the stars in the chorus. Her voice won't knock you down with either force or clarity, but it fits snugly in the setting of the album's ten tracks.

Read the rest of Schaeffer's review here. The band's CD release show is this Saturday night, September 20, at the Schlafly Tap Room, with the Midtown Thieves and Lindbergh Babies.