If you haven’t read last week’s excellent point/counterpoint Vampire Weekend music feature by Jason Toon and Ryan Wasoba, do so now. It sums up exactly how I feel about the band, particularly after seeing them live for a second time.

Their sold-out show last night at the Pageant was, like VW itself, just so-so. What impressed me most was the fervor displayed by the fans. The show was packed with 18- to 30-year-olds (proving that there’s a reason VW was named the number #1 whitest band by the creator of “Stuff White People Like" -- seriously, the only diversity I spotted was a young black guy with his frat buddies and a trio of Ellen lesbians) who knew the words to damn near every song.

When lead singer/guitarist Ezra Koenig informed everyone that “One” was a call and response number, the audience bellowed “Blake’s got a new face” loud enough for him to smile and remark, “Wow, that was pretty good.” And while there wasn’t much rocking out going down even in the very front rows, there was a lot of thorough head-nodding and awkward but enthusiastic hip-shaking. If VW can somehow manage to put out another successful record, it'll be the next Dave Matthews Band, mark my words.

For the most part, the songs were carbon copies of the album versions -- nothing more, nothing less. Just like when “The Kids Don’t Stand a Chance” randomly plays on my iTunes, I was struck by how castrated indie rock sounds sometimes. And when a burly guy in front of me started belting out “As a young girl, Louis Vuitton…” for “Cape Cod Kwassa Kwassa,” I could only shake my head and laugh.

The set ran just over an hour, which is relatively impressive given the fact that the band has but a single album with about 45 minutes worth of material. They played two new songs -- if anyone has a guess on the names, chime in with a comment -- which had a lot of ska influence and some intense tribal rhythms that reminded me a little bit of Animal Collective.

The consensus from the people lingering after the show was that Koenig needs to take some hip-shaking lessons from David Lee Roth and/or Mick Jagger. He tends to just sing the songs, stand there, and look pretty. 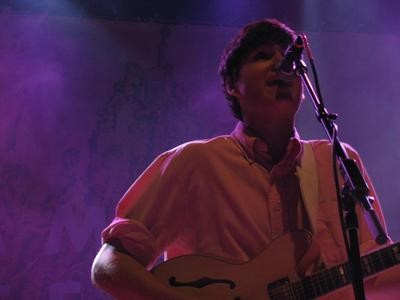 The other question on everyone’s mind after the brief set was why didn’t they play a cover song? With their derivative style, would it have been too much to ask for a little rendition of “You Can Call Me Al” with Chevy Chase’s face floating around on their glow-in-the-dark backdrop?